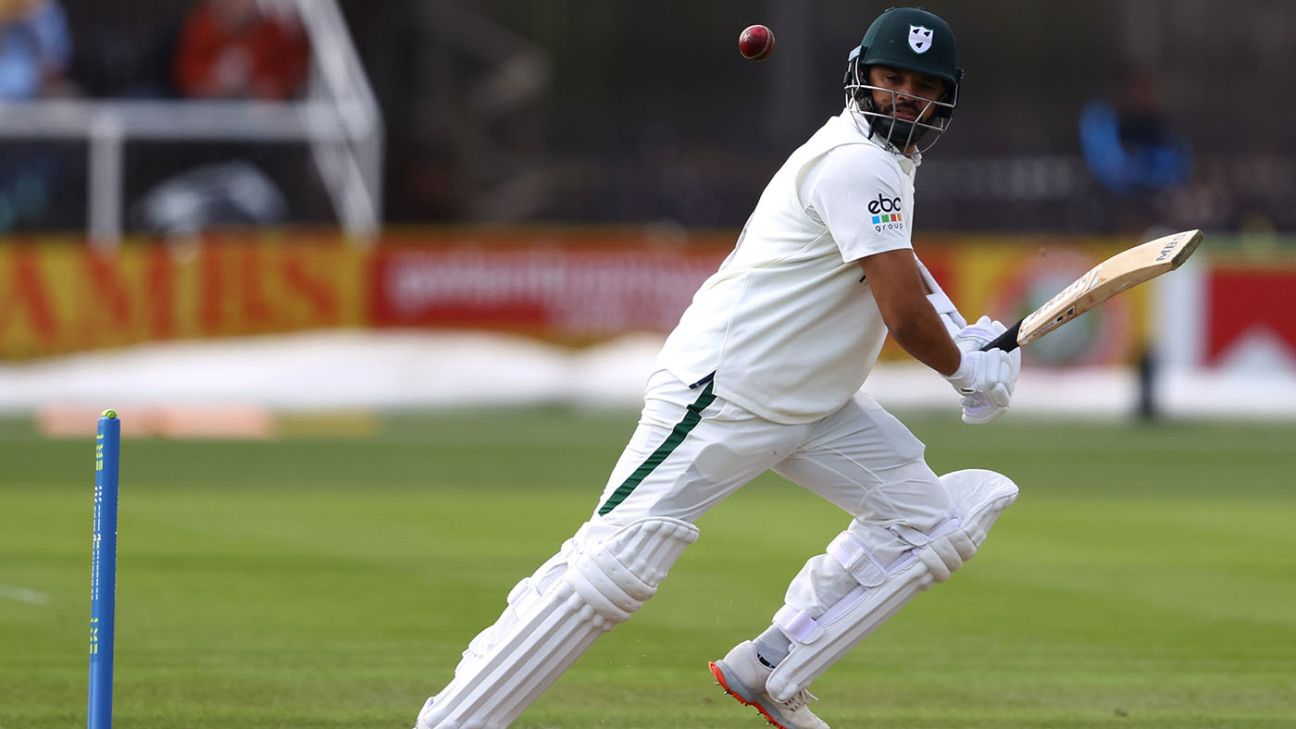 Worcestershire 456 for 3 (Ali 202*, Haynes 127) lead Leicestershire 148 (Barnard 3-45) by 308 runs
Azhar Ali scored a superb double-hundred as he and fellow centurion Jack Haynes rewrote the record books on day two of the LV=Insurance County Championship match with Leicestershire at New Road.
Pakistan Test batter Azhar and former England Under-19 batter Haynes put on 281 in 78 overs for the third wicket – a record partnership for any wicket against Leicestershire. It surpassed the 278 by Cyril Walters and HHIH ‘Doc’ Gibbons at New Road in 1934.
Their efforts were largely responsible for Worcestershire totalling 456 for three by the close – a lead of 308. Haynes was eventually dismissed for 127 but Azhar went onto bring up his double-ton in the final over of the day with a cover drive for four off Rehan Ahmed.
It was completed from 328 balls with one six and 18 fours and he then shared in another century stand with Brett D’Oliveira (52 not out).
Azhar arrived at New Road after a successful Test series against Australia which included a marathon 175 spanning 11 hours at Rawalpindi. He initially found it a challenge acclimatising to English conditions and his opening six innings yielded 34 runs.
But he has flourished since hitting 92 against a Durham attack including Ben Stokes, and for the majority of the time he has been in partnership with Haynes.
The pair had been together for stands of 195 (Durham) and 187 (Derbyshire) before joining forces for this marathon effort.
Haynes has been quick to acknowledge the influence on his batting this summer of Azhar as he has converted promising innings into major contributions. His maiden hundred came in the Durham game and this was the Worcester-born batter’s third century in successive matches.
He was the first Worcestershire player to achieve that feat since Daryl Mitchell in 2017 when he scored hundreds against Derbyshire, Northamptonshire and Sussex.
The former England Under-19 player has always looked full of class and on this form may soon be knocking on the door for further international recognition.
Azhar and Haynes took full toll of a toiling attack and both benefitted significantly from the cut and pull shots as they provided rich entertainment after a delayed start to proceedings.
Play did not get underway to 1.10pm but the third-wicket pair made up for lost time by scoring 148 runs during the afternoon session.
Haynes pulled Chris Wright for six and Leicestershire were powerless to stem the flow of boundaries before Azhar took a stride forward and flicked Ed Barnes for a single to fine leg to complete his century from 159 balls with 11 fours.
His partner followed him to three figures with a clip to deep mid wicket off Rehan. It took 15 more deliveries than Azhar and contained one six and 14 fours.
The second new ball was taken immediately after tea but the record stand was established when Haynes cut Mulder for his 17th and final boundary.
Mulder had his revenge soon afterwards when Haynes pushed forward and was lbw for 127. He batted for five hours and faced 230 deliveries.
Azhar continued to demonstrate some superb stroke-play after he was joined in the middle by Club Captain, D’Oliveira.
Some of his cover drives, cuts and pull shots were a delight to watch as he showed little sign of tiring
D’Oliveira, a century-maker against Leicestershire at the Uptonsteel County Ground last month, also played fluently in another century stand with Azhar from just 134 balls.
His own half century came from only 86 deliveries.
Tags: Azhar Ali, County Championship Division Two, Jack Haynes, Leicestershire, Leics vs WORCS, Worcestershire