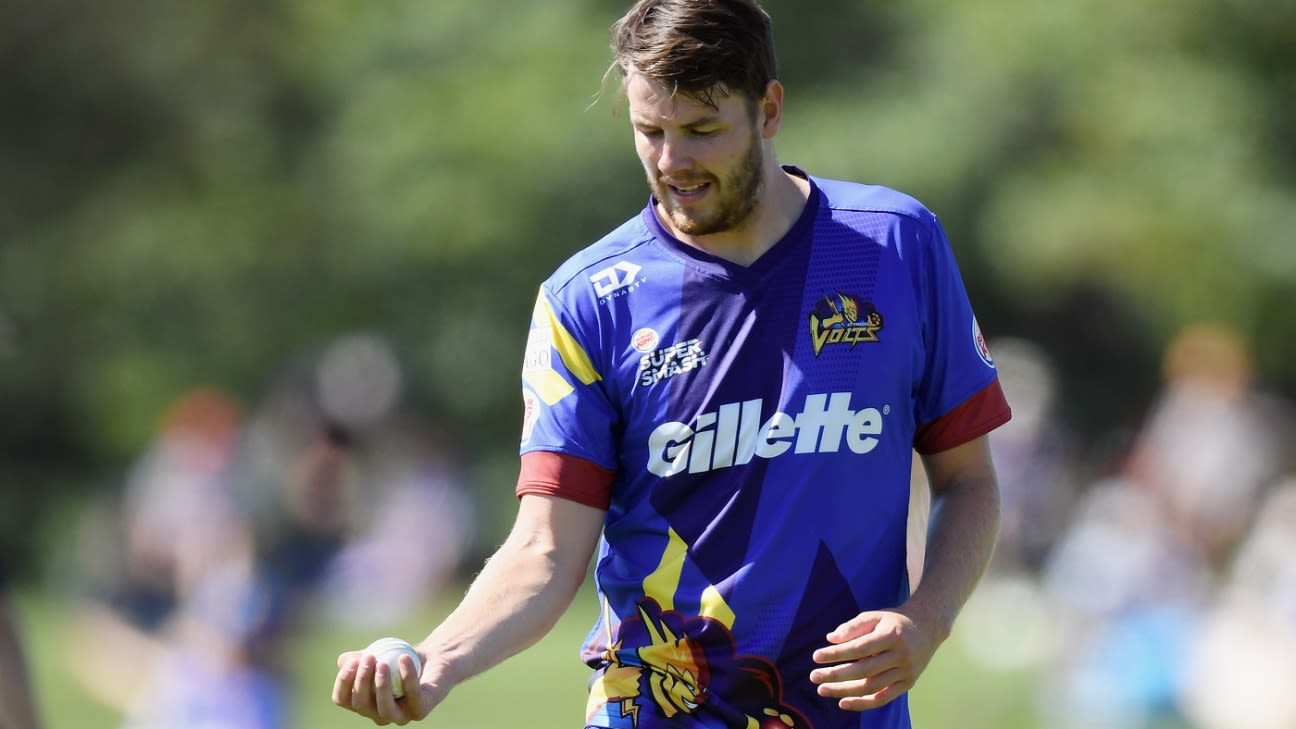 Jacob Duffy, the New Zealand seamer, has signed for Kent on a short-term deal that will see him play two County Championship matches.
Duffy, 27, was part of New Zealand’s enlarged squad for their ongoing Test series against England but was trimmed from the initial 20-man group ahead of the first Test at Lord’s, having played in both warm-up games.
Kent have struggled with injuries to seamers throughout this season with Darren Stevens, Harry Podmore and Nathan Gilchrist all sidelined as things stand, while Jackson Bird had his early-season spell as an overseas player cut short by a shoulder injury.
Matt Henry, Duffy’s compatriot, is due to return to the club after the third Test at Headingley but the club were keen to recruit an additional seamer for their upcoming County Championship fixtures against Gloucestershire and Surrey, which are interspersed with T20 Blast fixtures.
Related
“We’re delighted to be able to secure Jacob’s services for our next two Championship matches,” Paul Downton, Kent’s director of cricket, said. “It’s a very busy part of the season with Championship matches intermingled with the Vitality Blast and Jacob will strengthen our seam attack at this crucial stage of our Championship campaign.”
Duffy will be Kent’s second overseas player for the Championship alongside the South African allrounder George Linde, who is available across formats. Qais Ahmad, the Afghan legspinner, is at the club for the T20 Blast but is not expected to play in the Championship.
Kent have endured a difficult start to the season and are ninth in the 10-team top division of the Championship, with four draws and two losses from their six games so far. They have also struggled in the Blast despite their status as defending champions, finally picking up their first win in their sixth group game against Middlesex on Sunday.
Elsewhere, Durham have announced that Keegan Petersen has returned to South Africa ahead of schedule due to personal reasons. Nic Maddinson, the Australian batter, is expected to replace him after Australia A’s ongoing tour to Sri Lanka.
Tags: County Championship Division One, County Championship Division Two, Durham, Jacob Duffy, Keegan Petersen, Kent, Matt Henry, New Zealand, New Zealand in England, Nic Maddinson