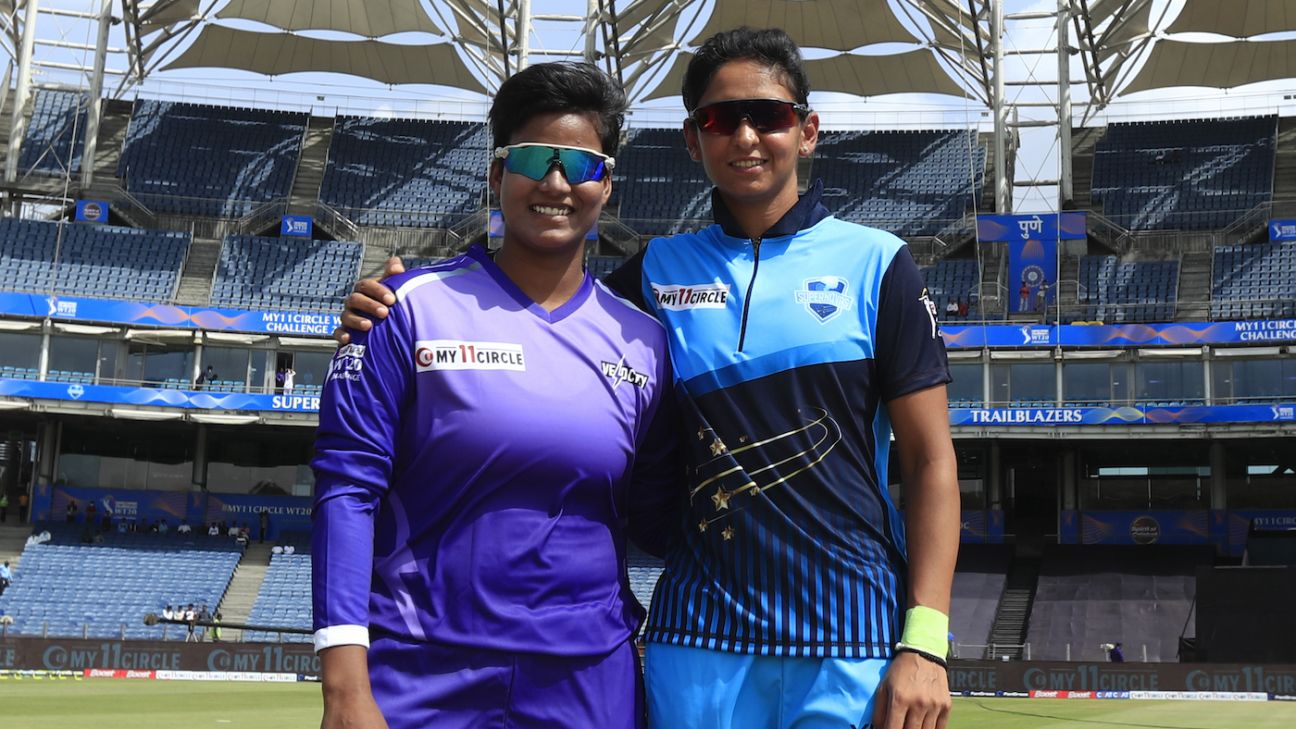 Harmanpreet Kaur’s Supernovas, the most successful team in the Women’s T20 Challenge, are eyeing their third title as they take on the tournament’s only side without a trophy, Velocity, who are led by Deepti Sharma. The final begins at 7.30pm at the MCA Stadium in Pune.

A chance to take home silverware that may be up for grabs for the last time, if the BCCI’s plans, albeit only at a preliminary stage, of launching a Women’s IPL as early as next March comes to fruition.
Both Harmanpreet and Deepti, therefore, would be keen on adding a final flourish to their teams’ campaigns which kicked off with them winning their respective season openers but slumping to a defeat in their next appearance.
Related

The two sides have met four times in as many seasons, with Supernovas holding a 3-1 advantage. The last time they played a final, Radha Yadav, who is in the Velocity ranks this year, smashed the winning runs for Supernovas in a cliffhanger of a finish in Jaipur. That was in 2019, the year Velocity was added as the third team to the competition, with Mithali Raj at the helm.
Under new captain Deepti, Velocity handed Supernovas a seven-wicket defeat on Tuesday. Half-centurions Laura Wolvaardt and Shafali Verma, and strike bowler Kate Cross were the chief architects of Velocity’s win in the teams’ most-recent encounter. Shafali’s 30-ball fifty, which held the record as the fastest in the Women’s T20 Challenge for all of one game and a little over 48 hours, headlined that fixture. It was Harmanpreet, though, who had walked away with the Player-of-the-Match honours for her 71 and two catches.
1:32

Deepti: ‘I am always ready to perform in any situation’

Kiran Navgire: The 27-year-old uncapped Velocity big-hitter announced herself to the world with the first ball she faced. Off went a crackling six, the first of her 10 boundaries during a 34-ball 69 against Trailblazers. Along the way, she broke Shafali’s record for the fastest Women’s T20 Challenge fifty, waltzing to the milestone in just 25 balls.
“Everybody enjoyed her innings,” Harmanpreet said on the eve of the final. “The first ball she faced showed the kind of player she is and how beneficial she can be [for the teams she plays for] in the future. The momentum Velocity got through her innings was outstanding. It was really delightful to see someone from India hit the ball into the stands. I am really hoping for a great future for her.”
Harmanpreet Kaur: Averaging 54 with a chart-topping 108 runs from two innings, Harmanpreet is the form batter of the tournament. She followed up her 37 in the opening game with a gritty 71 and she has lived up to her reputation as a gun fielder, taking blinders and haring across the boundary to save runs.
“If you perform in these games, you can carry lots of confidence with you ahead. I am glad that whatever I am trying, I am able to do that and trying to help my team-mates also,” Harmanpreet, the India T20I captain, said.
Harmanpreet Kaur and her Supernovas will be targeting a third Women’s T20 Challenge title•BCCI
“This tournament definitely plays a big role for us [because] we are not getting many series before the Commonwealth [Games T20 starting July 29],” she added. “Whatever [chances] we have, I want to give them my 100%, so that once the Commonwealth Games start, I should be in a good frame of mind.
Pooja Vastrakar: Another standout India international in this competition, pace-bowling allrounder Vastrakar is placed atop the wickets chart with five strikes, including a T20 best of 4 for 12, from two innings. With the bat, she added a 12-ball 14 at No. 7 in Supernovas’ opening win while also being one of the quickest movers in the field all through.
“The way she performed in the World Cup and especially in these two games was outstanding to watch,” Harmanpreet said. “She is someone who is now coming up with the ideas; you don’t need to spoon-feed her and she’s bowling the way she wants to bowl. You need a player like her who can read the game very well … The way she is taking the responsibility – that’s how I expect the other players to do their job. She is on the right track.”

What to look forward to

Ecclestone and King spinning a web: The two Supernovas spinners have picked up only two wickets apiece so far. Still, their ability to break partnerships and check the run-flow at crucial stages has played a part in Supernovas’ run to the final.
How left-arm spinner Ecclestone fares against Velocity’s left-hand batters Yastika Bhatia and Deepti is worth keeping an eye on. As for wristspinner King, who tested Shafali in patches on Tuesday, her face-off with the other power-hitter, Navgire, could be just as riveting.
Improved fielding from Velocity?: Four dropped catches off straightforward chances against Trailblazers nearly derailed their campaign. Sneh Rana, Radha Yadav, and Ayabonga Khaka were the guilty parties in that game and there were slip-ups in ground fielding, too.
By contrast, Supernovas have been a less iffy fielding side, though Deandra Dottin uncharacteristically shelling a catch, of Shafali, at point did contribute to their loss to Velocity. Under lights, and in blustery conditions at the MCA Stadium, the team that holds on to their catches could eventually be the one that gets their hands on the trophy.
Tags: Deepti Sharma, Harmanpreet Kaur, India, Supernovas vs Velocity, Women's T20 Challenge