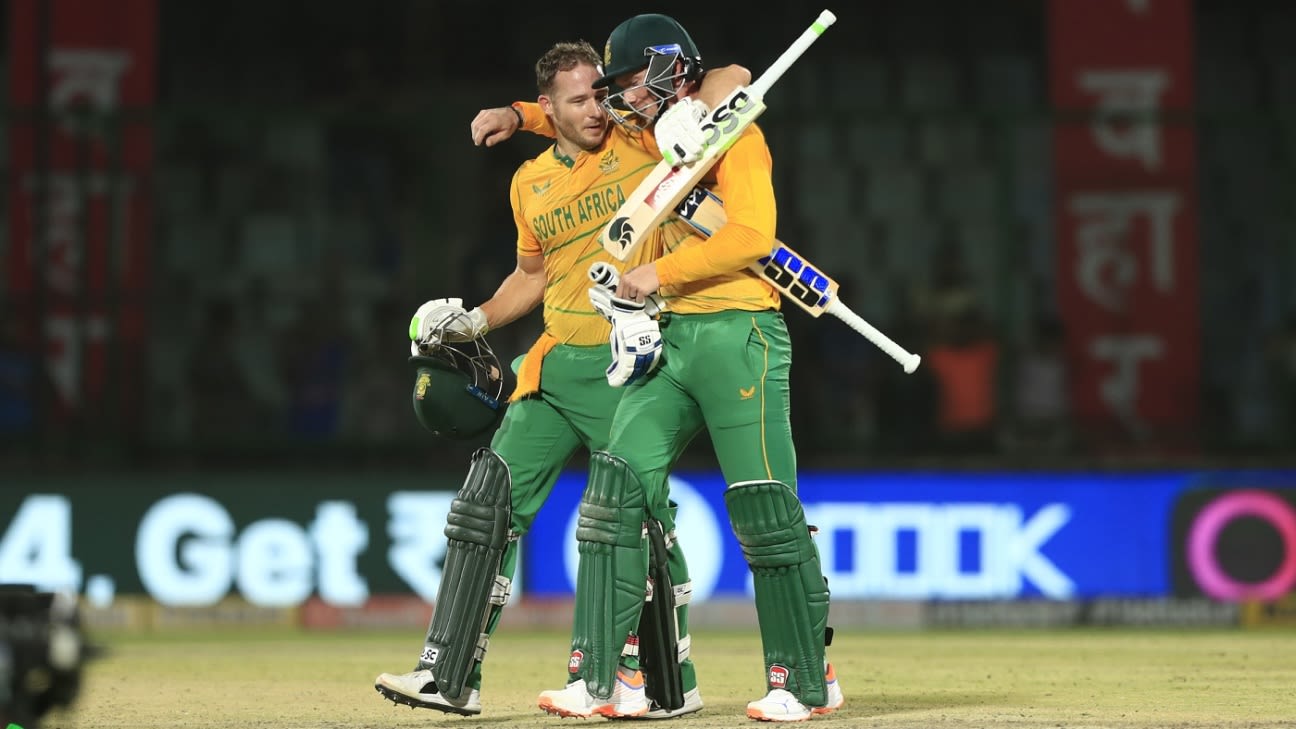 South Africa 212 for 3 (van der Dussen 75*, Miller 64*) beat India 211 for 4 (Kishan 76, Shreyas 36, Parnell 1-32) by seven wickets
South Africa pulled off their highest successful chase in T20I cricket, and denied India a record 13th successive T20I victory, despite being a batter light in the series opener. Unbeaten half-centuries from David Miller and Rassie van der Dussen, who shared a 131-run fourth-wicket stand, a record for South Africa, built on an impressive powerplay, led by a surprise move to promote Dwaine Pretorius to No.3, and earned South Africa victory with five balls to spare.
On a pitch that India’s top-scorer Ishan Kishan described as “not easy”, run-scoring was quicker than expected and boundaries in over-supply. India hit 16 fours and 14 sixes; South Africa 17 fours and 14 sixes.
India would have fancied their chances after they made use of some early luck to post their highest total against South Africa – 211 for 4 – and the highest T20I total at Delhi’s Arun Jaitley Stadium. Their batters were particularly severe against South Africa’s two spinners. Keshav Maharaj, who opened the bowling, and Tabraiz Shamsi bowled five overs altogether and conceded 70 runs between them, with Maharaj finishing with his most expensive T20I figures of 1 for 43.
But in response, South Africa played the powerplay to perfection, and scored 61 runs in the first six overs. They lost captain Temba Bavuma and Pretorius but the latter’s cameo set up the middle order to finish off. Though van der Dussen had a customarily circumspect start, and the required run-rate grew to over 14 an over at one stage, Miller kept South Africa in the hunt in the first half of the partnership. The pair took on the Indian pace bowlers at the end, with Bhuvneshwar Kumar and Harshal Patel conceding 86 runs in their 8 overs.
2:12

Steyn: Rassie could look to improve on the way he starts his innings

Kishan turns uncertain start into cracking finish
Kishan mis-hit three of his first four boundaries and played down the wrong line to almost everything else as India appeared to struggle despite the runs on the board. His opening partner, Ruturaj Gaikwad, also wasn’t striking the ball entirely cleanly. He top-edged Anrich Nortje over short fine-leg but after India piled on 36 runs in five overs and survived the first properly disciplined over, from Wayne Parnell, things changed.
Kishan showed his touch when he dabbed Nortje behind third man and then smoked a drive through the covers to finish the powerplay with India 51 without loss. He was unstoppable from there. He slayed the short ball, advanced down the track to hit Shamsi for six three times, and then belted Maharaj through the leg-side for 20 runs off four balls before successfully reviewing an lbw call.
Fielding fluffs
South Africa made four errors, and two of them were costly. The first came immediately after the powerplay when Gaikwad pulled a hip-high short ball from Parnell to Pretorius at long leg. He hit it hard, but straight at Pretorius, who could not hold on as the ball burst through his hands for six. Gaikwad was dismissed off the next ball.
Then, three balls past the halfway mark, Maharaj shortened his length as he saw Shreyas Iyer coming down the track and Quinton de Kock had an opportunity to stump him, but could not break the wicket in time. Iyer was on 25 and went on to score 36.
And three balls after that, Kishan top-edged a slog-sweep to midwicket where Maharaj, van der Dussen, debutant Tristan Stubbs, and Shamsi all converged, but the ball fell between them. Kishan was on 52 and went on to add 24 more to his score, most of it off Maharaj. The very next ball, there was an opportunity to run out Rishabh Pant for a duck at the non-striker’s end, when he wanted to sneak a run but collided with Rabada. Stubbs lobbed the ball over the fielder backing-up at that end. Pant smashed a 16-ball 29.
Pretorius promoted
In a surprise move, South Africa opted to move Pretorius rather than Miller or Stubbs to No. 3 when Bavuma was dismissed in the third over but a little bit of digging revealed there was some method to what seemed like madness. Pretorius has batted at No. 3 ten previous times in his T20 career, and once in an international, when he scored his career-best 77*. He punched the second ball he faced through the covers for four, and slog-swept the fifth for six to suggest what he could do and then took three sixes off Hardik Pandya to confirm it. Pretorius swung hard and got the short, full, and length ball over the leg side before Harshal broke through his defences with a slower ball and took out off stump.
Ishan Kishan made 76•BCCI
de Kock dismissed and pressure builds
de Kock holed out to Kishan at square leg off Axar Patel, with South Africa’s required rate above 11 an over, and then India applied the squeeze. Between Axar, Avesh Khan, and Harshal, they bowled 18 boundary-less deliveries, which pushed South Africa’s required rate up above 14 an over.
van der Dussen shifts gears

It was expected that Miller would be the batter to keep South Africa in the game – given his impressive IPL – and he did exactly that. He broke the boundary drought with 10 runs off the last two balls of Harshal’s second over and then hit Axar for a six onto the third tier of the stands.
But van der Dussen, oft-criticised for his slow scoring rate, could not get the ball away as regularly until he broke the toe-end of his bat and had to change it for another. With the new bat, he hit Avesh over his head for four, off a no-ball, and then sent him straight to deep midwicket but Shreyas spilled a simple chance. van der Dussen was on 29 off 30 balls at the time and went on to plunder 22 runs off Harshal’s third over, including sending two full-tosses for six and bringing up fifty off the 39th ball he faced with a six over deep square leg. He brought the requirement down to 34 off the last three overs and then 12 off the last two before surviving an lbw review to hit the winning runs in the first ball of the final over.
Tags: David Miller, India, India vs South Africa, Ishan Kishan, Rassie van der Dussen, South Africa, South Africa in India