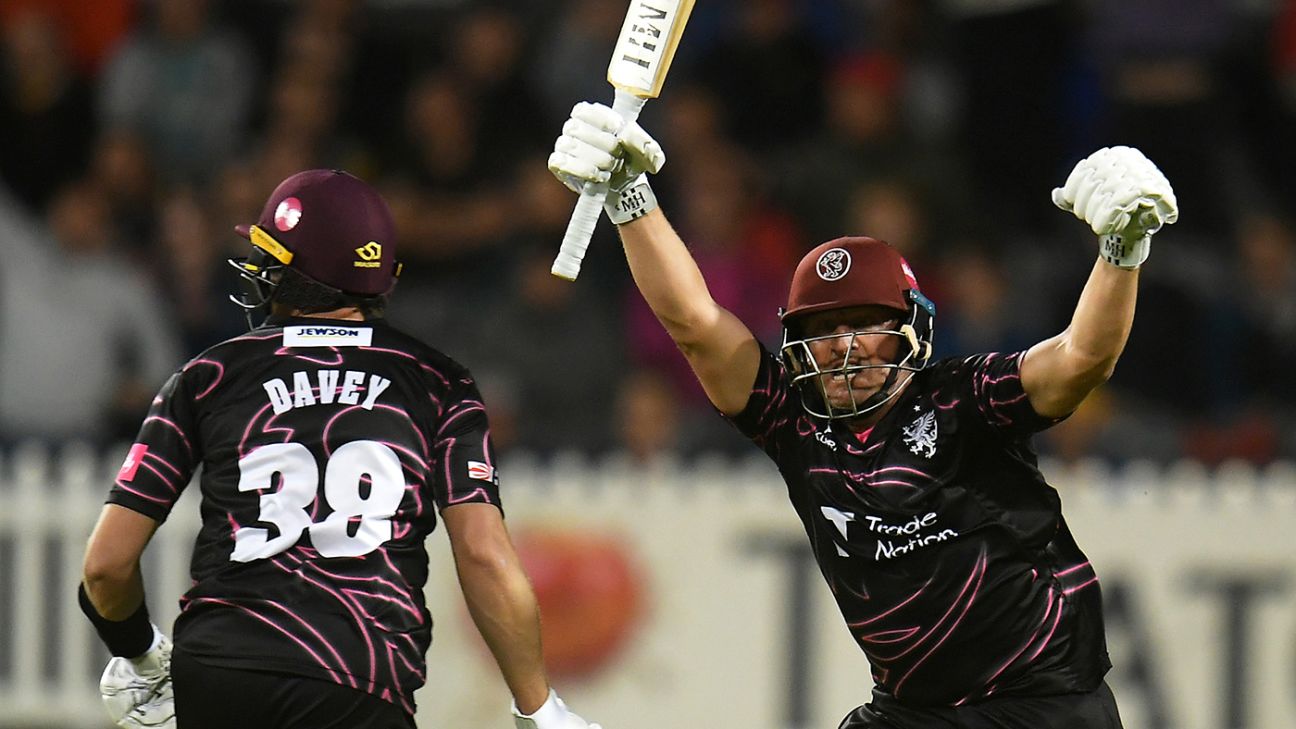 Somerset 114 for 7 (van der Merwe 48*) beat Gloucestershire 101 for 5 (Hammond 29) by three wickets (DLS method)
Roelof van der Merwe was the match-winner as Somerset recovered from a shock start to win a rain-affected Vitality Blast clash against arch-rivals Gloucestershire by three-wickets (DLS) at Bristol.
After the visitors had won the toss, Miles Hammond smote four sixes off the opening over of the game, bowled by Tom Lammonby, on his way to making 29 off just 12 balls. By the time rain interrupted play after five overs, Gloucestershire had raced to 61 for 1. A resumption at 8.45pm saw the game reduced to ten overs per side and the hosts went on to post 101 for 5.
Somerset’s revised target was 112. They slumped to 55 for 7 before van der Merwe hammered an unbeaten 48 from 15 balls, with four sixes and four fours, to see them to an unlikely victory with three balls to spare.
It was an extraordinary end to a game Gloucestershire had dominated. With a very short boundary on one side of the ground, the last thing Somerset could afford was to bowl too straight from the Ashley Down Road End. Left-arm seamer Lammonby erred in that respect and saw his second, third, fifth and sixth deliveries effortless lofted over the leg side by left-hander Hammond.
Hammond and James Bracey took the score to 46 off 3.5 overs before Josh Davey made a breakthrough, having Hammond caught at short third man off an edged drive. Bracey was undeterred, taking a boundary off Siddle’s opening delivery of the fifth over, which also saw new batsman Ian Cockbain strike two fours.
When rain sent the players off, Bracey was unbeaten on 21 from 14 balls. He added only a single to his score before being caught at cover off a leading edge in the first over of the resumption, bowled by left-arm spinner van der Merwe.
Somerset opted for spin at both ends. Lewis Goldsworthy’s first ball was dispatched for a straight six by Cockbain, who fell to the second, caught at deep cover to leave Gloucestershire 72 for 3.
Jack Taylor hoisted Goldsworthy for another straight six. But van der Merwe completed two canny overs for 14 and when Glenn Phillips skied a catch to wicketkeeper Tom Banton off Lewis Gregory, Gloucestershire were 90 for 4. Gregory’s over cost just five runs. The final one was delivered by Ben Green, who sent back Taylor, caught at deep midwicket in conceding only a further six.
Now it was Gloucestershire bowling with a wet ball. David Payne used it to good effect, having Banton caught a short third-man off his second delivery in an opening over costing eight. When Rilee Rossouw was caught in the deep attempting to pull Josh Shaw over the longer square boundary and Tom Abell tamely cut Zak Chappell to backward point, Somerset were 15 for 3 in the third over.
Will Smeed skied a Shaw full toss to be caught on the leg side and Gregory drove Benny Howell to long-on where Hammond took a fine diving catch.
Lammonby had quickly cleared the ropes twice, the second time with an audacious reverse scoop off Shaw. But when he tried to reverse sweep Tom Smith and guided the ball straight to extra cover it was 50 for 6. Smith accounted for Green in the same over. But van der Merwe kept things interesting by hitting the left-arm spinner for 6-6-4, in the eight over.
Somerset needed 27 off the final two. That became 12 off the last when van der Merwe hit Payne for a six and a four.
Ryan Higgins, bowling for the first time in the innings, saw his first ball swept for four by van der Merwe. The second, a slower delivery was dispatched over deep square for six and the third through the off side for four.
Tags: Gloucestershire, Gloucs vs Somerset, Roelof van der Merwe, Somerset, Vitality Blast