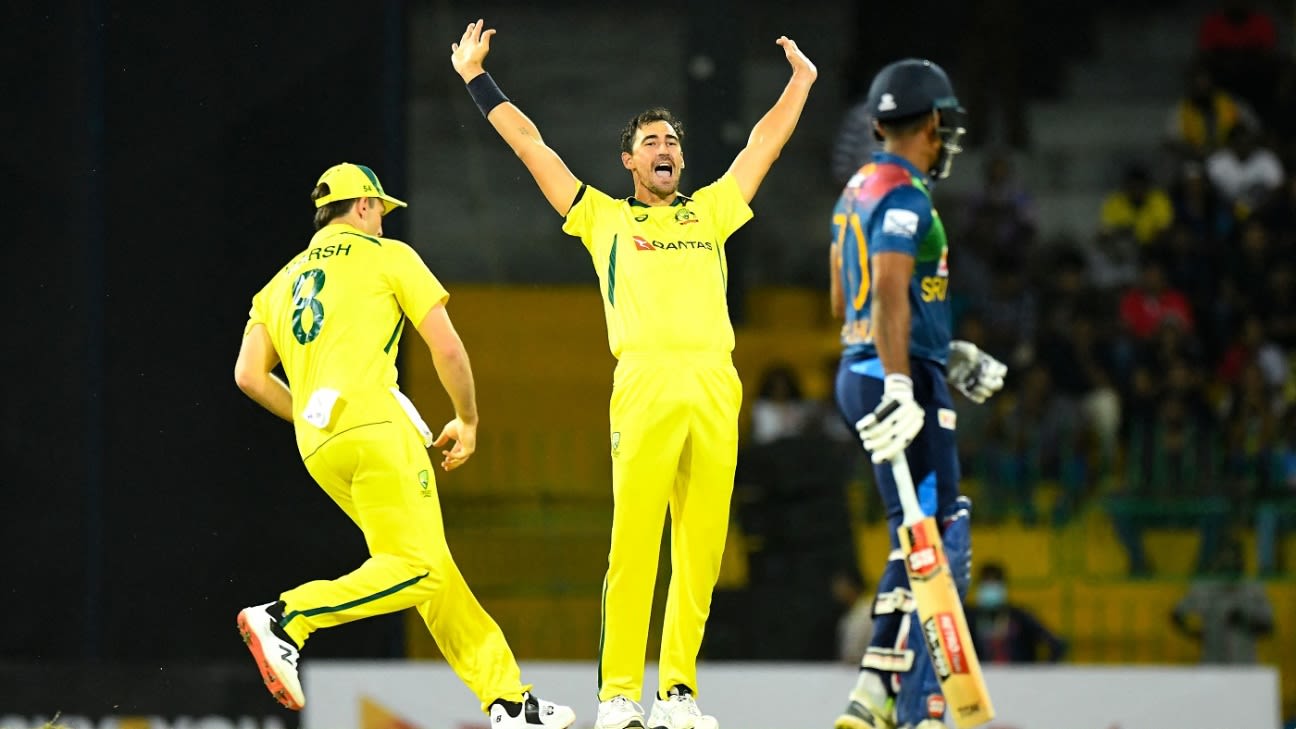 Australia fast bowler Mitchell Starc has been ruled out of the third T20I against Sri Lanka and is in doubt for the early part of the five-match ODI series after requiring six stitches in his left index finger following a bizarre laceration in game one in Colombo on Tuesday.
Jhye Richardson, who replaced Starc in Australia’s T20I side and took 3 for 26 in the three-wicket win in game two on Wednesday, and Kane Richardson* have been called into Australia’s ODI squad as cover.
Kane Richardson was added to the group on Friday and, initially, will be with the squad for the first two matches in Pallekele to provide an extra pace-bowling option alongside Pat Cummins and Josh Hazlewood. It is expected Australia will rotate their quicks during the ODIs with five matches in quick succession.
Starc lacerated the index finger on his bowling hand in the opening over of the first T20I on Tuesday. He reached so far down in his follow-through with his bowling arm that he ended up spiking his own finger with the bottom of his bowling shoes. He was able to bowl his remaining three overs and picked up 3 for 26.
He will remain with the squad and will continue to train but he will need a minimum of seven days, and possibly longer, for the wound to heal. That likely rules him out of the first ODI in Pallekele next Tuesday. Australia will likely be cautious with Starc as he will be a key cog in the Test attack later in the month after starring on his last Test tour of Sri Lanka.
Jhye Richardson was initially left out of the ODI squad despite being in the original T20I squad. He was set to play in the two Australia A four-day games in Hambantota that run concurrently with the ODI series in Sri Lanka. South Australia quick Nathan McAndrew has been called in from Warwickshire as Richardson’s replacement for Australia A.
Australia to persist with Smith in T20I squad
Meanwhile, Australia assistant coach Michael Di Venuto is confident Steven Smith will find form to consolidate his spot in the middle-order of the T20I side.
Australia will persist with Smith in the T20I squad, believing they can unlock the Test star’s true potential in the shortest format of the game.
The 33-year-old’s position in the middle-order has come into question after a prolonged slump in T20Is. Smith’s last T20I half-century for Australia came back in November 2019 and he was barely needed during the run to last year’s drought-breaking World Cup title as Mitchell Marsh and Matthew Wade were the batting heroes.
The former Australia captain averages 25.45 at a strike-rate of 125.31 from 56 matches in T20Is. Since the start of 2020 his strike-rate has dropped to 119.39 across 16 innings and he has only struck above 130 in five innings in that period.
Josh Inglis performed exceptionally well when called up for Australia’s home series against Sri Lanka in February, averaging 35.80 and striking at 145.52 in six matches, but he’s been squeezed out for Smith in this three-match series. Tim David is also knocking on the door of the Australia squad for a middle-order/finishing role as he continues to dominate in T20 leagues following another stunning showing for Lancashire on Wednesday.
Nuwan Thushara appeals successfully for an LBW to pick up Steve Smith•Getty Images
Smith was not required to bat in game one against Sri Lanka but he unsuccessfully challenged an lbw decision on Wednesday night and was out for 5 off 4 deliveries.
“Recent history, we’ve used (Smith) in a different way throughout our middle order, where people have batted around him,” Di Venuto said. “We know his skill level, we know his talent so we’re pretty keen to unlock him as a T20 cricketer and just let him go about his business and show us how good he is.
“If he was playing BBL cricket, he would dominate that competition. Unfortunately, a lot of our best players don’t play that competition because they play Test matches. Steven’s had good success in the IPL in years gone past.
“The skill level is exceptionally high, we’re hoping to unlock him during this period. We’ve got plenty of games leading into the World Cup so hopefully we see the best of Steve Smith.”
Di Venuto said Inglis could not be working harder to earn a recall but will have to bide his time for now.
“We’ve got very good players in our batting order and it’s a hard order to break into,” Di Venuto said. “He’s doing all the work behind the scenes, he’s a very valued member of this squad and waiting for his next chance.”
Tags: Australia in Sri Lanka, Jhye Richardson, Josh Inglis, Michael Di Venuto, Mitchell Starc, Sri Lanka vs Australia, Steven Smith