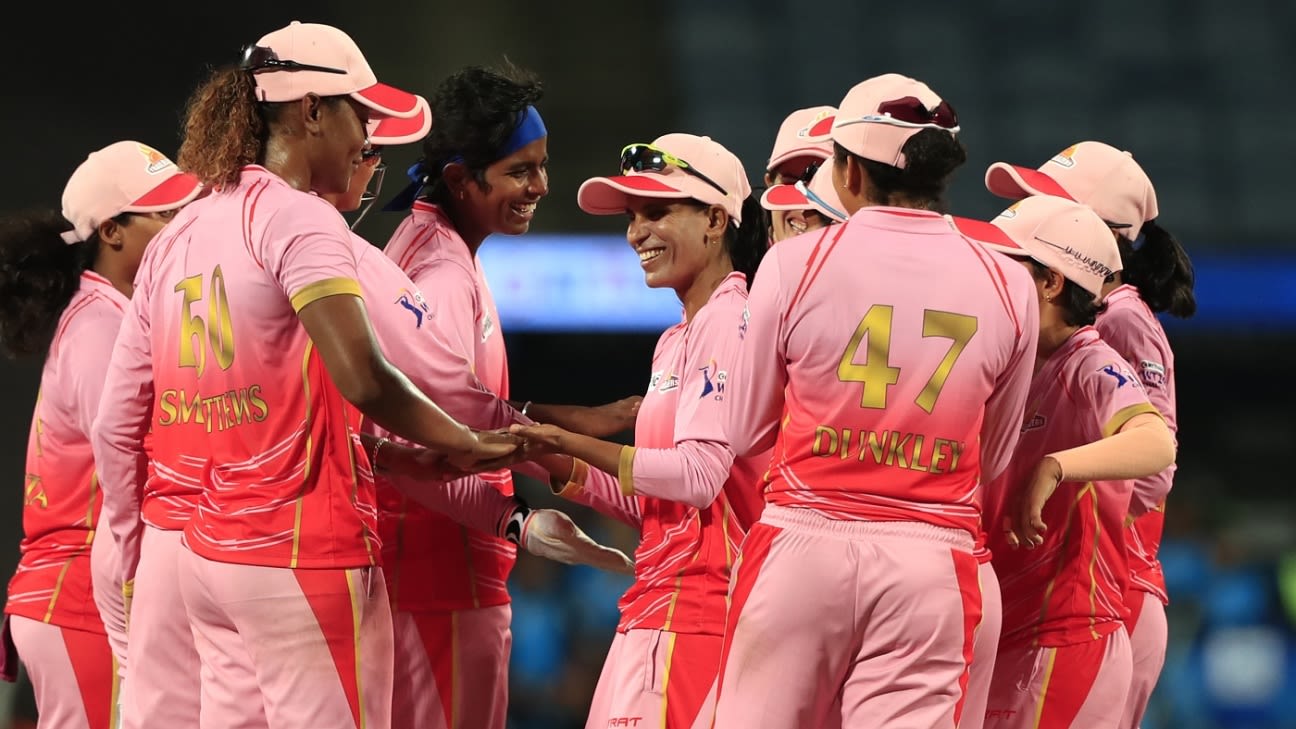 Who are playing?
In the third and final league-stage fixture of the fourth edition of the Women’s T20 Challenge, Deepti Sharma’s Velocity square off against Smriti Mandhana’s Trailblazers at Pune’s MCA Stadium, at 7:30pm on Thursday.
Related
What’s at stake?
A 49-run defeat in their first round-robin game, against Harmanpreet Kaur’s Supernovas, has thrust defending champions Trailblazers into a must-win situation. To make it to the final, not only will Trailblazers need to defeat Velocity but also do so by a substantial margin.
A victory for Velocity sends them into their second final in three seasons given they are the only team, other than the Supernovas, with a win on the board. Supernovas, meanwhile, have already booked their berth in a third straight final by virtue of one win in two games and a superior net run rate (NRR) over the other two sides.
What’s the NRR situation?
If Trailblazers bat first and score 160, they need to win by at least 32 runs to eliminate Velocity. If they chase 160, they would need to overhaul the target in around* 16.1 overs. (*The NRR might change slightly if they hit the winning runs with a four or a six.)
There’s no way both teams can overtake Supernovas’ net run-rate, which is 0.912 after their league-stage campaign, courtesy a win against Trailblazers on Monday and a seven-wicket loss against Velocity on Tuesday.
Velocity’s NRR is 0.736, so if they lose – a requisite for all three teams to be on two points each – their NRR can’t improve. If they win, they set-up a face-off against Supernovas, the side they went down to in the 2019 title clash.
Head to head
The two sides have faced each other only twice. Having been added to the three-team Women’s T20 Challenge set-up one year later than the other two sides, Velocity, led by Mithali Raj at the time, beat Trailblazers by three wickets in Jaipur in 2019. Danni Wyatt and Shafali Verma, then uncapped and only 15 years old, were the architects of that Velocity triumph in Jaipur.
When the two teams met in 2020, figures of 4 for 9 from Sophie Ecclestone, who is part of Supernovas this year, helped bowl out Velocity for just 47 in Sharjah. Trailblazers polished off the target in 7.5 overs with nine wickets in hand.
How the squads stack up
Trailblazers: Smriti Mandhana (capt), Poonam Yadav (vice-capt), Arundhati Reddy, Hayley Matthews*, Jemimah Rodrigues, Priyanka Priyadarshini, Rajeshwari Gayakwad, Renuka Singh, Richa Ghosh, S Meghana, Saiqa Ishaque, Salma Khatun*, Sharmin Akhter*, Sophia Dunkley*, Sujata Mallik, Shradda Pokharkar.
Velocity: Deepti Sharma (capt), Sneh Rana (vice-capt), Shafali Verma, Ayabonga Khaka*, Kiran Navgire, Kate Cross*, Keerthi James, Laura Wolvaardt*, Maya Sonawane, Natthakan Chantham*, Radha Yadav, Aarti Kedar, Shivali Shinde, Simran Bahadur, Yastika Bhatia, Pranavi Chandra
NOTE: * denotes overseas player
Laura Wolvaardt smashed a 35-ball 51 in Velocity’s win against Supernovas•BCCI
Form guide of key players
Laura Wolvaardt: The South Africa top-order batter made an unbeaten 35-ball 51 in Velocity’s win against Supernovas, deftly negotiating windy conditions. With that innings, she became the first overseas player to score fifties across the WBBL, the Hundred, and the Women’s T20 Challenge, where she’s playing her first season. Designated the captain of the Velocity batting group by coach Devika Palshikar, Wolvaardt is the anchor Trailblazers would look to uproot early.
Jemimah Rodrigues: The 21-year-old India batter had a golden opportunity to stamp her authority on Trailblazers’ innings in their loss against Supernovas. But she could manage only a 21-ball 24 at first-drop, flat-batting a catch in the 14th over when she had both the time and the platform to play a more significant innings. With the Birmingham Commonwealth Games scheduled for July-August, a match-winning knock could inject confidence in Rodrigues and the Indian team alike.
Shafali Verma: The Velocity opener smashed the fastest Women’s T20 Challenge half-century on Tuesday, getting to the mark in 30 balls. Her discomfort against Supernovas legspinner Alana King, however, could be the cue for Trailblazers captain Smriti Mandhana to introduce Poonam Yadav in the powerplay. Left-arm spinner Rajeshwari Gayakwad, too, could pose her a challenge early.
Salma Khatun: The Bangladesh offspinner leaked 13 runs in her first seven wicketless deliveries against Supernovas but went at just a run a ball in her next 17 which fetched two wickets. She took out the in-form Harleen Deol for 35, breaking a 37-run stand with Harmanpreet and later removed King. If Trailblazers are to keep a leash on Velocity’s top order, Salma will have to expertly play her dual role of a breakthrough-giver and container again.
What to look forward to
Mandhana vs Deepti: It’s more than just a contest between two captains or a top-flight left-hand opener vs an offspinner who operated with aplomb in the powerplay in the previous game. The bragging rights will be up for grabs as the India and Sydney Thunder team-mates, who have shouldered vice-captaincy duties at the national level recently, go head to head. Deepti, captaining in the Women’s T20 Challenge for the first time, has her nose ahead in the race to the final. Can Mandhana outpace her to the winning post?
Cross vs Matthews England seamer Kate Cross struck twice in her first eight balls on Women’s T20 Challenge debut. The Supernovas top order appeared tentative in the face of the bounce and movement Cross was able to extract, using the wind and change of angles to good effect. With Matthews, who made a 14-ball 18 in the first game, set to continue as opener in the right-left combination with Mandhana, her approach against Cross could make for fascinating viewing in what’s set to be a high-octane clash.
With inputs on NRR by S Rajesh
Tags: India Women, Trailblazers vs Velocity, Women's T20 Challenge