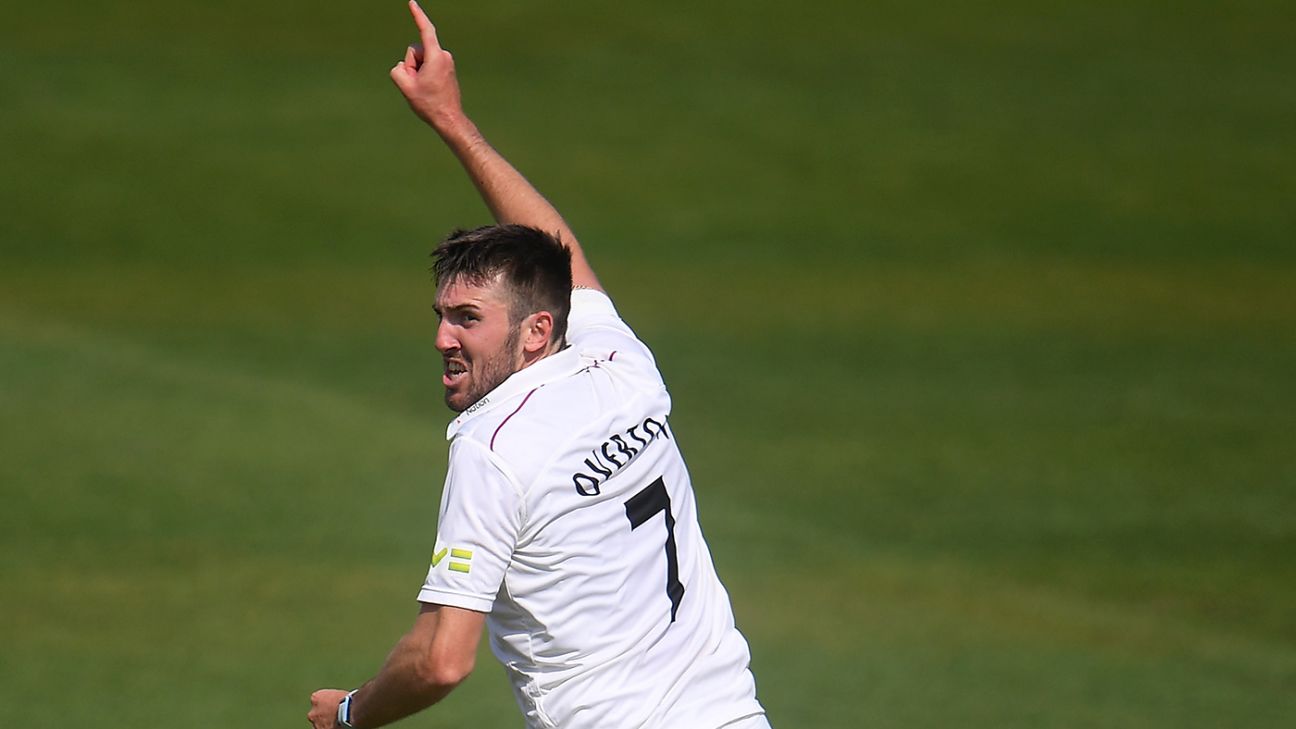 Hampshire 144 for 5 (Holland 49, Overton 3-21) trail Somerset 211 (Overton 44, Abbott 3-60) by 67 runs
Craig Overton claimed his 400th first-class wicket as Somerset fought back strongly at the end of a rain-shortened second day of the LV= Insurance County Championship match with Hampshire at Taunton.
The visitors looked to be cruising towards a first-innings lead when reaching 107 for one in reply to 211, Ian Holland leading the way with 49.
But the final session saw Overton produce an inspired seven-over spell, removing Holland and James Vince, as Hampshire lurched to 117 for four before closing on 144 for five.
The England seamer ended the day with three for 21 from 18 overs, keeping his side in the game as they led by 67 runs.
Early morning rain created a wet outfield and no play was possible before lunch. The action got underway at 1.40pm with Hampshire immediately looking to be positive and make up for lost time.
Felix Organ, unbeaten on 15 overnight, played Overton through the offside for four, but in the same over, the second of the day, he threw the bat at a wide one and edged a chest-high catch to Lewis Gregory at third slip.
New batsman Nick Gubbins faced a testing start. But Somerset’s seam attack, Overton apart, were unable to match the nagging accuracy of their Hampshire counterparts on the opening day.
Some loose deliveries allowed Gubbins and Holland to take the total to 63 for one from 26 overs when a problem with the ball led to it being changed.
It was 69 for one when the rain returned to cause a break in play. Holland had moved to 36, playing and missing at times, but also employing careful shot selection to take few risks.
Play resumed at 3.20pm and Gubbins soon produced the shot of the day, a superbly timed back-foot stroke that sent the ball racing past bowler Gregory for four.
Gubbins followed up with two boundaries off the next over, sent down by Josh Davey, and was looking in ominous form.
He had moved to 26 when more rain sent the players off. Tea was taken, with Hampshire 95 for one from 36 overs, with Holland unbeaten on 44.
Somerset desperately needed a breakthrough when play resumed at 5.30pm with a possible 19 overs left in the day.
They got it when Overton finally found the outside edge of Holland’s bat as he pushed forward and wicketkeeper Steve Davies took a straightforward catch.
Holland had faced 111 balls and hit three fours. It was Overton’s 400th first-class wicket and he continued to be the pick of a Somerset attack, who didn’t enjoy the best of luck.
With his score on 34, Gubbins edged Peter Siddle just short of Overton in the slips, having been beaten by the previous delivery.
Siddle then struck in controversial circumstances when Gubbins, on 36, was judged caught behind by umpire Alex Wharf stretching forward to a ball just outside off stump.
Gubbins stood for several seconds in disbelief over the decision before dragging himself off. Before they knew it, Hampshire were 117 for four as Vince fell lbw to an Overton delivery that nipped back off the seam.
Ben Brown and Liam Dawson quickly added 27 before what proved the last delivery of the day saw Dawson trapped plumb lbw playing across a ball from Gregory.
Tags: County Championship Division One, Craig Overton, Hampshire, Ian Holland, Somerset, Somerset vs Hampshire