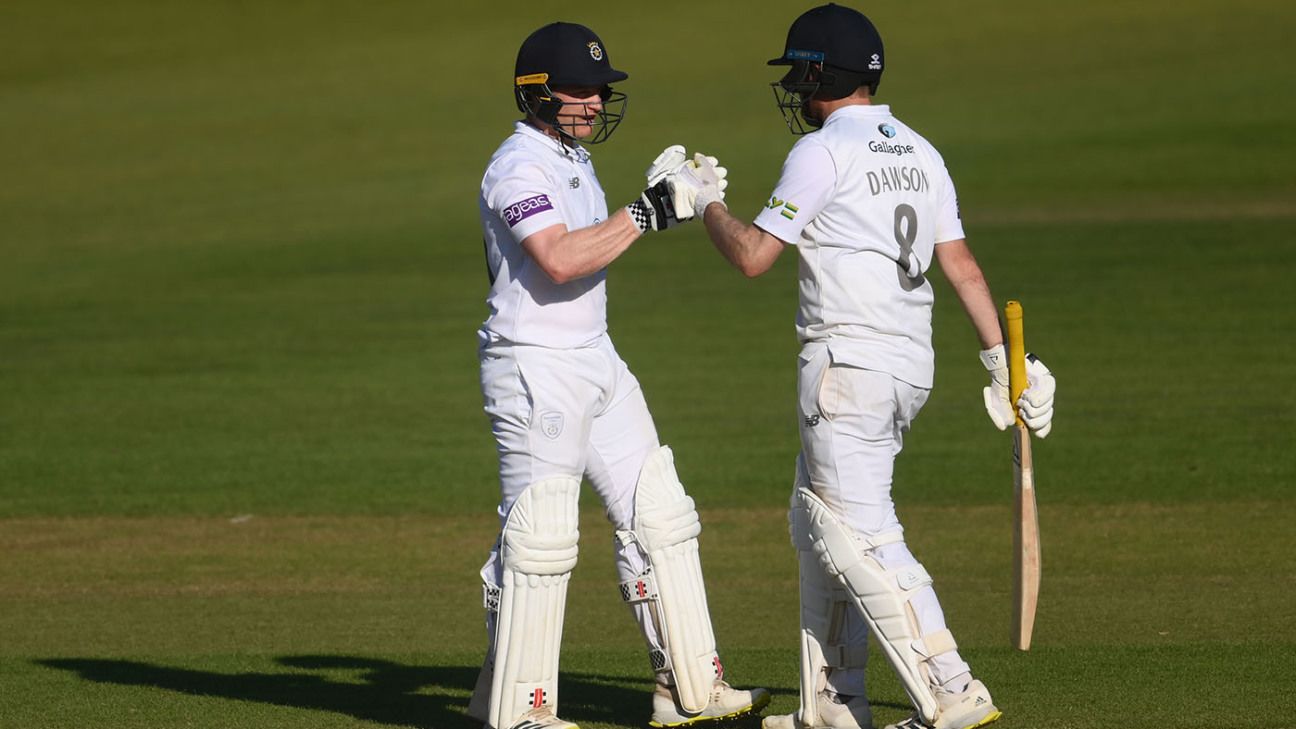 Hampshire 225 for 4 (Dawson 61*, Gubbins 58, Brown 52*) trail Yorkshire 428 (Hill 131, Brook 76, Bess 51*, Wheal 4-59) by 203 runs
Nick Gubbins moved past 500 LV= Insurance County Championship runs for the season with his fourth half-century but Yorkshire remained on top at the Ageas Bowl.
The left-handed Hampshire batter averages 56 this season after two centuries and two other innings which passed fifty as he settles into life on the south coast having moved from Middlesex almost a year ago.
Jordan Thompson had snared both Hampshire openers within the first five overs of the riposte but Gubbins’ 58, coupled with Liam Dawson and Ben Brown’s unbroken 114-run stand, made sure the hosts weren’t blown away, albeit still 203 runs in arrears.
Dom Bess had earlier notched his 11th career half-century, an unbeaten 51, as Yorkshire were bowled out for 428 – with Brad Wheal claiming 4 for 59.
The pitch provided far more pace and bounce than it had on the first day. The pace element was evidenced when Bess edged and was dropped at second slip by Dawson; while the bounce did for Matthew Waite, as Dawson made amends after Keith Barker had found the shoulder of the bat.
After a 44-run partnership with Bess, Thompson fell edging to first slip having failed to cut a ball too close to his body, the first of Wheal’s four tail-end scalps. The Scotland international also wrapped Bess on his gloves, which needed medical attention but he was fine to bowl later in the day.
Bess showed a flair for finding gaps with guided shots for much of his innings, although peeled off an opulent cover drive off Barker, before reaching fifty in 81 balls with a late cut to the ropes off Dawson.
Around Bess, Wheal had Matthew Revis lbw while attempting a straight drive, Dominic Drakes adjudged to have gloved a bouncer behind and sent back Steven Patterson’s off stump to celebrate his 100th first-class wicket, Yorkshire bowled out for 428.
Hampshire had selected Ian Holland and Felix Organ as their openers despite the return to fitness of Joe Weatherley, mainly due to the bowling benefits they bring. Both fell to the new ball to leave Hampshire 12 for 2.
Holland was squared up by a Thompson delivery which moved away off the seam. Organ was undone attempting to drive the quick bowler and was struck on the pads.
Gubbins and James Vince veered Hampshire away from a collapse with an 82-run stand, although the former was given a life on 31 as both Adam Lyth and Will Fraine both dropped the same ball in the slips.
Both departed either side of tea. Vince looked set on 33 but was leg before to Waite and Gubbins was caught behind when Patterson angled a ball in and caught his outside edge. Hampshire were again in danger of caving in at 111 for 4, but Dawson and Brown rectified things.
Neither could initially be described as fluent. Dawson required 11 balls to get off the mark, pinched a three then took another eight deliveries to score again. It took him 48 balls to find the boundary, although the slashed cover drive was worth the wait. In similar patience, Brown was 4 off 21 balls.
Dawson ticked along and reached his fifty with a well-judged cut off 91 balls, with the duo’s century stand arriving in 170 balls as they warmed into the ageing ball. Brown followed his partner to the milestone with a top edge of the keeper in 98 balls. Dawson ended the day on 61, Brown on 52 and Hampshire 225 for 4.
Tags: Ben Brown, County Championship Division One, Dom Bess, Hampshire, Liam Dawson, Nick Gubbins, Yorkshire, Yorkshire vs Hampshire