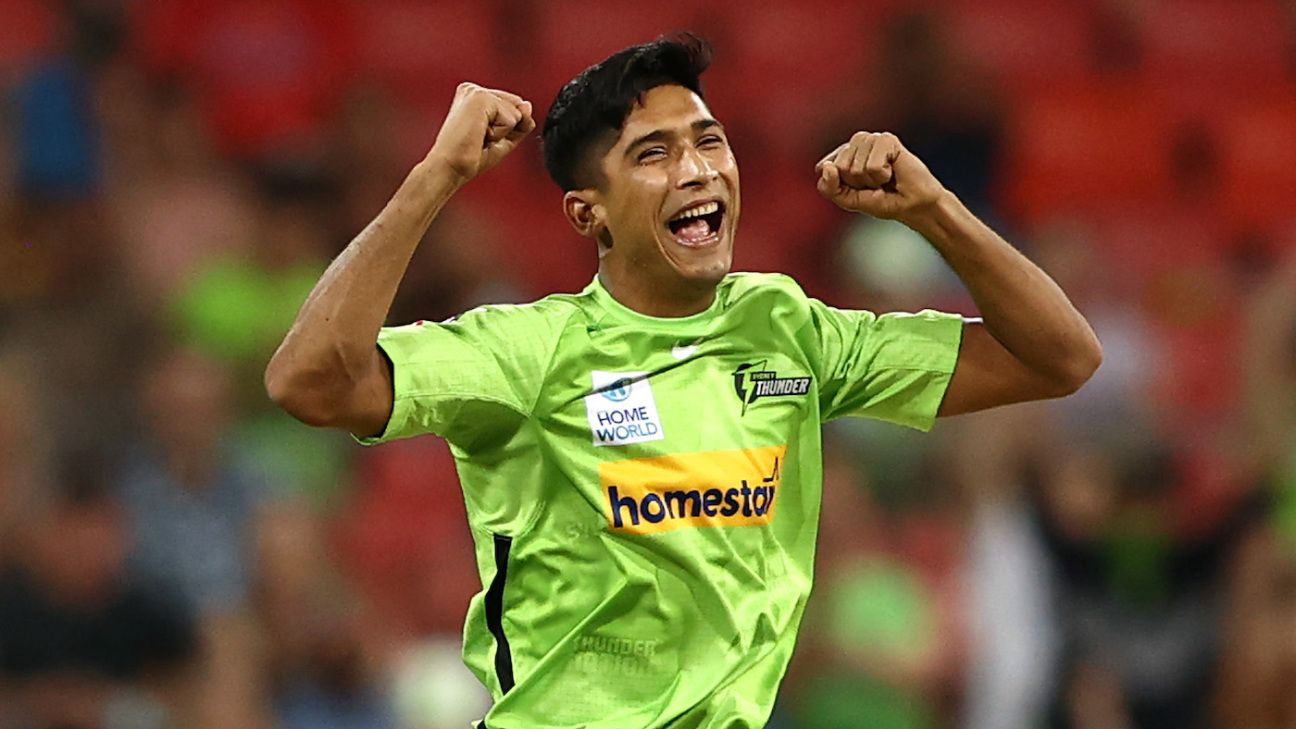 Pakistan quick Mohammad Hasnain and Australia batter Ben McDermott are among the top men’s Hundred overseas wildcard picks for this year’s competition, with India allrounder Deepti Sharma and experienced New Zealand pair Suzie Bates and Lea Tahuhu selected in the women’s draft.
Hasnain has only just been passed as fit to bowl again after having his action reported during the 2021-22 Big Bash. He has been signed by Oval Invincibles, while McDermott, who has been in form for Hampshire after being left out of Australia’s plans, joins London Spirit.
Ashton Turner and Daniel Sams, two others on the fringes of Australia’s T20 squad, were also picked up as overseas wildcards, along with New Zealand batter Finn Allen, Namibia allrounder David Wiese, Afghanistan wristspinner Noor Ahmed, and former South Africa legspinner Imran Tahir.
ESPNcricinfo Ltd
“I’m overjoyed to be joining Oval Invincibles,” Hasnain said. “The Hundred looked like great fun last year and I can’t wait to get involved. The opportunity to play alongside stars like Sunil Narine, Jason Roy and the Curran brothers is hugely exciting. I’m really looking forward to getting back out on the field again.”
The wildcard draft, which sees a fourth overseas player added to each squad, was brought in for the 2022 season as an attempt to offset the disruption caused by players coming and going due to international commitments or injury. Teams in the Hundred will still only be able to field three overseas players in their XI.
In the women’s competition, Sharma moves to Birmingham Phoenix, having played for Spirit in the inaugural season; Bates has joined Invincibles, and Tahuhu signed for Manchester Originals. Elyse Villani and Nicola Carey, who were among the Australian contingent who withdraw due to Covid travel restrictions in 2021, were selected by Trent Rockets and Welsh Fire respectively.
“I’m really excited to be heading to Welsh Fire,” Carey said. “We’ve already got a strong Aussie contingent with Rachael Haynes and Annabel Sutherland and combine that with Tammy Beaumount as skipper and we’ve got the makings of a really strong squad. I’ve never played at Cardiff before and I’m looking forward to seeing the Welsh Fire fans making lots of noise at Sophia Gardens.”
ESPNcricinfo Ltd
Australia allrounder Heather Graham, who impressed for Rockets as a replacement last year, was picked up by Northern Superchargers, while Australia spinner Molly Strano and New Zealand seamer Jess Kerr complete the overseas wildcard line-up.
Women’s teams remain able to make signings up until the end of June, while men’s squads will be completed when Vitality Blast wildcard picks are made on July 7.
Sanjay Patel, managing director of the Hundred, said: “It is brilliant news to welcome 16 more international stars to the Hundred. Players from seven countries have been selected and it’s great to welcome the likes of Mohammad Hasnain, Deepti Sharma and Suzie Bates to the Hundred this year. This continues to take the quality of cricket to another level and we can’t wait for a second summer of incredible sporting action.”