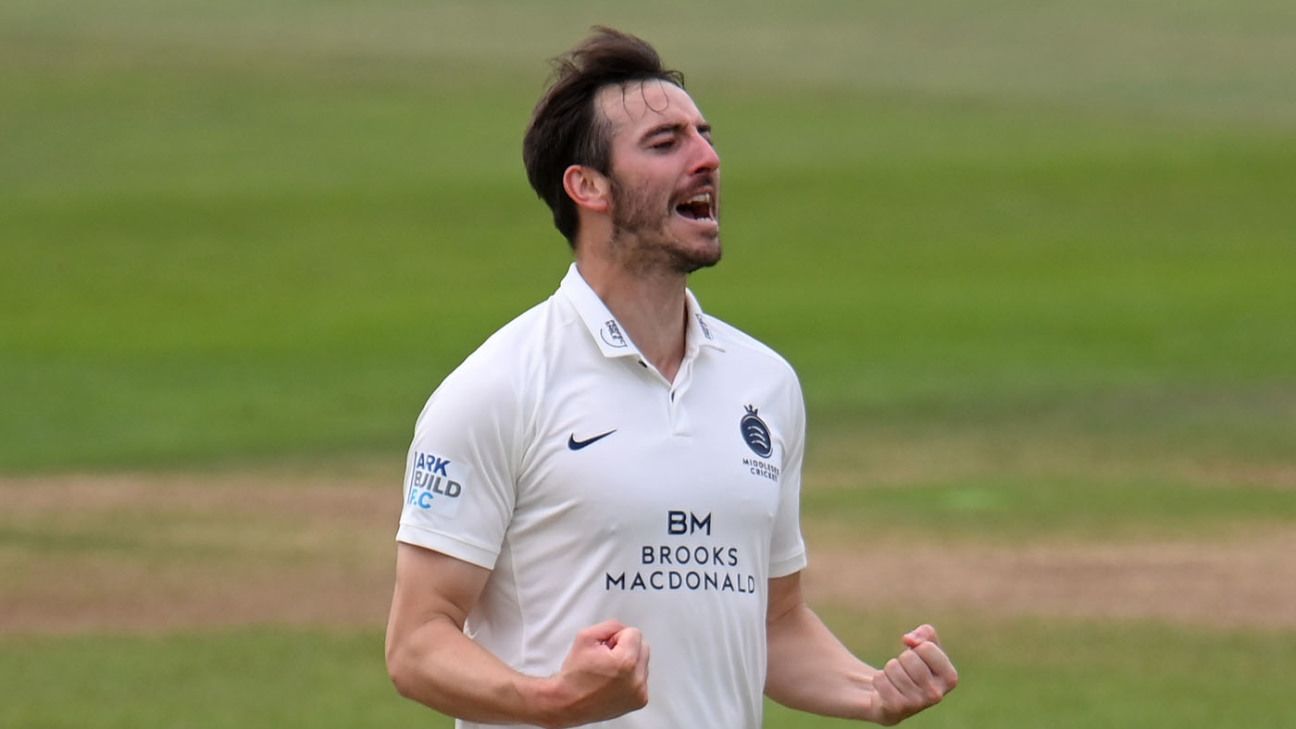 Middlesex 251 and 95 for 3 (Stoneman 60*) lead Derbyshire 229 (Madsen 62; Roland-Jones 5-45) by 117 runs
“Hominem te memento” whispered the auriga in the ear of Roman generals during their triumphs. Remember that you are a man. Perhaps Mickey Arthur should detail a junior member of staff to say something similar to Shan Masood during these weeks in which he is making batting appear the simplest thing on the planet.
Or perhaps not. Masood is enjoying a magnificent season partly because, having experienced failure, he understands the nature of success. The Pakistani opener will only need to recall his uncharacteristically wild slash to a ball from Ethan Bamber in the eighth over of this morning’s play to be freshly aware of his fallibility. Stevie Eskinazi took the catch at first slip and thus ended one of the finest 49s you could ever see. And this match in its tree-ringed paradise may yet hinge on how well Masood bats in the fourth innings
Arthur’s achievement in the East Midlands has been rather different and more complex. Rather than remind Derbyshire’s cricketers of their vulnerability, he has encouraged them to make the most of their strengths. The result is that a team which lost half its 14 first-class matches in 2021 has so far been defeated just once this season. The side’s competitive edge, and thereby Arthur’s influence, was apparent in the first half of this day’s play, never more so than when Wayne Madsen and Brooke Guest were putting on 82 for the third wicket.
But at that point, Arthur might have asked George Scrimshaw, one of Derbyshire’s 12th men, to go out and murmur words of caution in the batsmen’s lugholes. For once Guest had been gated for 40 by a ball angled in to him from Bamber, very little went well for Godleman’s team. Indeed, Middlesex’s bowlers seized control of the day, their efforts led by a man who needs no reminding of human frailty. For given even a regular helping of luck, Toby Roland-Jones would have gained many more than four England caps; instead, his recent career has been wrecked by injury and he must commit himself to Middlesex. Plainly he does not find it a hardship.
Roland-Jones’ devotion to his county’s cause has always been very plain but his spell of 7-4-14-5 this afternoon was extraordinary even by his standards. Maintaining a tight line and using a recently changed ball, he exploited the Derbyshire players’ every weakness – and there was suddenly an abundance of those. The result was that having been well placed on 175 for two and 208 for three, the latter giving a deficit of 43, the home side collapsed like a detonated power station, losing their last seven wickets for 21 runs in exactly 11 overs.
Declines of that magnitude and velocity often determine the outcomes of games. By close of play, Middlesex were 95 for 3, giving them a lead of 117 and the opportunity to bat a couple more sessions of the third day before leaving, or even setting, a target on a pitch which is offering the spinners plenty of encouragement. Mark Stoneman is unbeaten on 60 and has hit eight fours and a six, with all but one of his boundaries on the leg side. The visitors’ advantage is nothing like enough but it is difficult to see them subsiding like Derbyshire did and harder still to see the home side chasing more than 240 unless Masood plays an innings from the Gods. And come Wednesday, Thilan Walallawita and Luke Hollman should enjoy bowling on this Queen’s Park pitch
But it was not the twisters who caused havoc this afternoon. Rather, it was Roland-Jones loping in with those lovely long strides who persuaded Madsen to play a little too far from his body and thick-edge a catch to Sam Robson in the gully. For all that Masood is by five furlongs his side’s best batter, Madsen is still the player his colleagues look to when their ship’s listing in rough water. It was almost natural that his dismissal began the submersion.
Next over, Leus du Plooy came half-forward to Tim Murtagh but merely edged Eskinazi the second of his three slip catches. Ten minutes later, Anuj Dal missed a straight one from Roland-Jones, who was to bowl similarly probing deliveries to Alex Thomson and Sam Conners before either had scored. The batsmen trusted their pads; it was not a wise move. At one stage, Roland-Jones had taken four wickets for absolutely spit in 21 balls. On the first day of this match the public address system had gone on the blink; this afternoon, some of the locals – flat vowels, warm hearts – probably wondered if someone could smash the bloody thing again. Derbyshire’s innings ended when Luis Reece hoisted Murtagh into the heavens and Max Holden took the catch at deep square leg.
Middlesex’s lead was 22. It’s now 117 and feels much larger than that. Beyond a doubt, it does not seem 24 hours since Masood had hit five blissful fours off Murtagh’s new-ball bowlers, the skipper being among the sufferers. Four of those boundaries were conceded by Roland-Jones, though, the man who this afternoon ran through Derbyshire’s batsmen like ten pints of Hook Norton coursing through an Oxonian’s bowels.
Tags: County Championship Division Two, Derbyshire, Middlesex, Middlesex vs Derbyshire, Toby Roland-Jones, Wayne Madsen