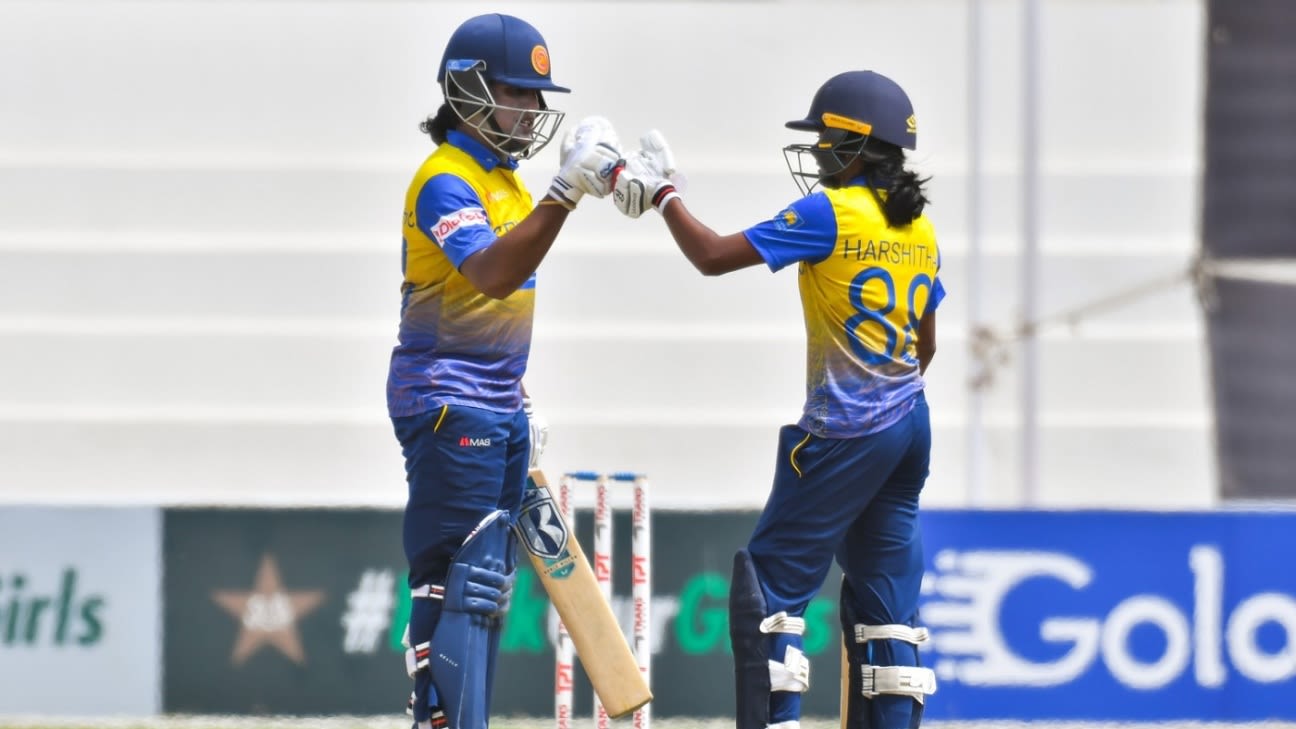 Sri Lanka 260 for 7 (Athapaththu 101, Madavi 75, Amin 2-43) beat Pakistan 167 (Riaz 56, Athapaththu 2-20, Ranasinghe 2-29) by 93 runs
An all-round performance from Sri Lanka captain Chamari Athapaththu helped her team to a convincing consolation win on the final day of their tour of Pakistan. After electing to bat, she scored her sixth ODI hundred, a 95-ball 101, before taking 2 for 20 with the ball to help rout Pakistan by 93 runs.
It looked like a miserable tour for Sri Lanka would end with another defeat when they lost two wickets for four runs. Hasini Perera was – you guessed it – run out on the fifth ball of the innings before Anam Amin trapped Hansima Karunaratne in front. But Athapaththu consolidated with Harshitha Madavi in a splendid third-wicket partnership that accumulated 152 runs. While Madavi was circumspect in her approach, her captain was far more aggressive, taking the fight to spinners and fast bowlers alike and putting Pakistan on the ropes for the first time all series.
A number of curious captaincy decisions by Bismah Maroof, who had a torrid day, didn’t help. She brought herself on when a wicket was needed, though it was quickly apparent she wouldn’t be the one to deliver it. An increasingly emboldened Athapaththu was taking on every bowler at that point, and she wasn’t spared. When Diana Baig did come on, she was accosted with three fours off her first three balls.
When Nida Dar finally had Athapaththu stumped, she had brought up her hundred, and a number of cameos lower down the order took the visitors to 260. Pakistan had only ever managed more than that in a second innings once and, against a buoyant Sri Lanka, they had their work cut out if they were to manage something similar.
The chase followed the expected script as Pakistan couldn’t even come close. The fall of Sidra Ameen was perhaps unfortunate, with the batter getting an inside edge onto her pad though she was given out lbw. However, what followed was Pakistan’s own doing. An ordinary call for a non-existent single from Maroof saw Muneeba Ali run out. Soon, Maroof was bowled for a duck by Oshadi Ranasinghe while Nida Dar was cleaned up by Athapaththu.
Aliya Riaz’s half-century brought some respectability to the scorecard for Pakistan, but the target was a way away. Sri Lanka kept chipping away as Pakistan waited for the inevitable and, with more than eight overs to go, folded for 167. Sri Lanka may not leave with either of the two trophies they fought for in Karachi, but they had the consolation of the last laugh.
Tags: Chamari Athapaththu, Harshitha Samarawickrama, ICC Women's Championship, Pakistan, Pakistan Women, SL Women vs PAK Women, Sri Lanka, Sri Lanka Women, Sri Lanka Women in Pakistan