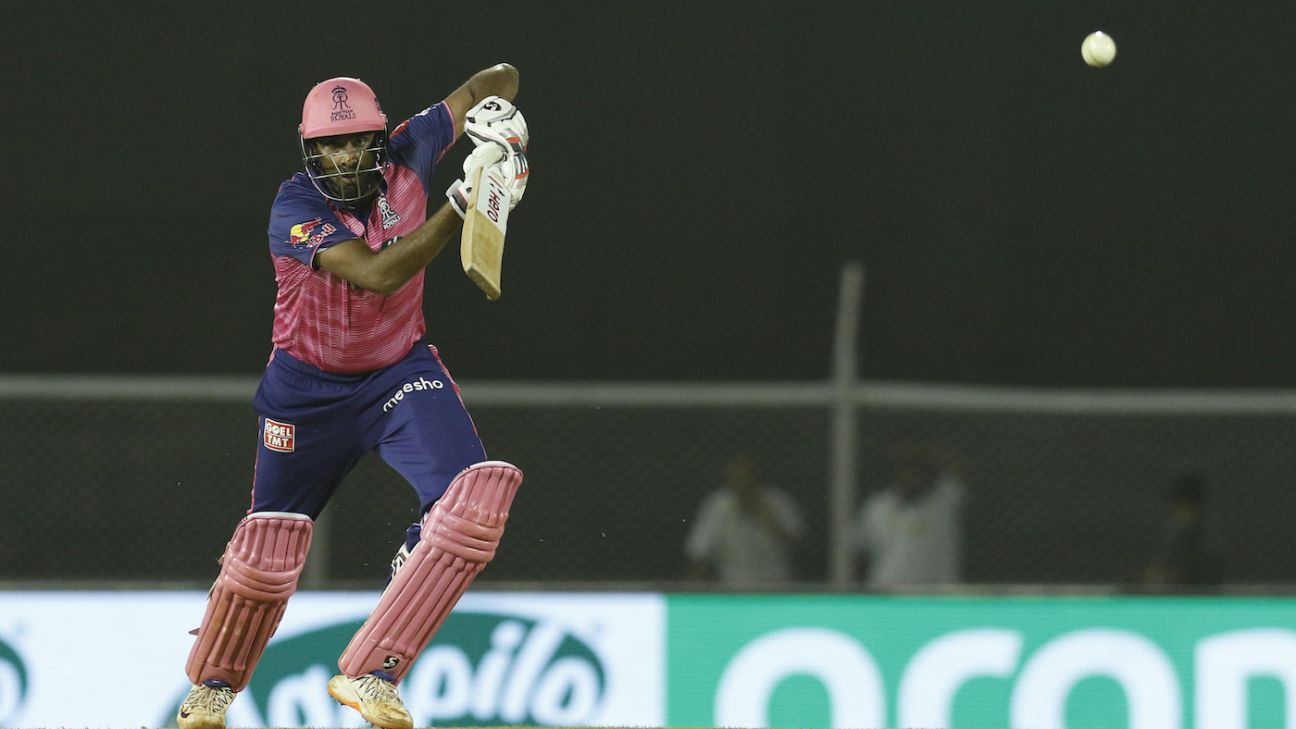 Rajasthan Royals 151 for 5 (Jaiswal 59, Ashwin 40*, Solanki 2-20) beat Chennai Super Kings 150 for 6 (Moeen 93, Dhoni 26, McCoy 2-20) by 5 wickets
R Ashwin the allrounder carried Rajasthan Royals to a top-two finish with a tense win over Chennai Super Kings, the team that represents his hometown, in their final league match. On a slow pitch, both sides made superb use of the powerplay before struggling once the fields went out. Knowing their target played a part in Royals being able to plan their innings better than Super Kings.
Super Kings’ slowdown was drastic: they could only double their powerplay score of 75 despite the set batter Moeen Ali batting almost through the innings. But he too went from 59 off 21 to 93 off 57. Royals scored 47 off their first five overs but the next eight overs brought them just 37 runs at the loss of two wickets. In the end, Ashwin, promoted at No. 5, hit three sixes in his 23-ball 40 not out to go with his bowling analysis of 4-0-28-1 to ease Royals home from 43 required off the last four.
Moeen special
It might be all gloom for Super Kings this season but it is not possible to be gloomy when Moeen is on song. That he had come in early meant Super Kings began the acceleration in the fourth and not the customary fifth over. First he went after the hard lengths of Prasidh Krishna, which is usually a good bet against Moeen. Then Ashwin’s away turn didn’t matter as he took 16 off the fifth. The last over of the powerplay was the best of the lot: he hit Trent Boult for boundaries to square leg, midwicket, long-on, third man, point and extra-cover. He brought up his half-century off the 19th ball, the second-fastest fifty for Super Kings.
The slowdown
It began with Ashwin making a comeback in the eighth over. Devon Conway went to sweep him but the ball turned out to be too full, trapping him lbw. Obed McCoy then used his slower ones to use the slow surface. Add Yuzvendra Chahal and an experimental middle order to the mix, Moeen found himself taking on more responsibility than he would have liked.
Not that it was easy to hit out. MS Dhoni, who had earlier announced he was going to play at least one more season for Super Kings, was dropped twice but he couldn’t find any timing either. At one point 45 balls went without a boundary, a drought Dhoni broke with a four off Chahal in the 15th over. However, the trio of Ashwin, Chahal and McCoy continued to stifle the life out of the innings with only 30 coming off the final four overs.
Moeen Ali’s 93 off 57 balls went in vain•BCCI
Jaiswal’s impetus

Jos Buttler had a sensational start to the tournament but he has now scored 63 in his last five innings at a run a ball. Thankfully for Royals, Yashasvi Jaiswal has stepped into the breach after being reintroduced to the XI mid-season. He single-handedly made the powerplay count after Buttler got out in the second over and Sanju Samson kept finding fielders. Jaiswal raced away to 31 off 17 even as the other 13 balls in the first five brought them just 16 runs.
The Royals slowdown

The spreading of the fielding and the introduction of spin, however, brought a similar challenge for Royals. When Samson went to force the pace, he found the tall Mitchell Santner in the way of a straight drive. Devdutt Padikkal got frustrated too and tried a big slog sweep off Moeen, only to be bowled for 3 off nine.
The Ashwin endgame
This is when Royals promoted Ashwin, whom they have previously used as a pinch anchor and a pinch hitter but not in such a critical situation. As Ashwin got himself in, the ask went up to 67 off the last seven overs with Jaiswal too finding it tough to maintain the scoring rate of the powerplay.
Ashwin then skipped down the track and lofted Moeen for a six. Jaiswal repeated that dose to legspinner Prashant Solanki but holed out when he attempted again. Dhoni gave Solanki an over at the death in which he got rid of Shimron Hetmyer with a slider. With 38 required off 19, though, Ashwin slogged Solanki from wide outside off and against the turn to target the short boundary. He nailed it.
The slinger Matheesha Pathirana didn’t have many runs to work with but it was 24 off 14 when Ashwin ramped him over short third man to ease the pressure again. In the 19th over, Ashwin targeted the short boundary against Mukesh Choudhary’s left-arm angle before sealing it by steering Pathirana behind point in the last over.
Tags: Chennai Super Kings, Indian Premier League, Moeen Ali, Rajasthan Royals, Ravichandran Ashwin, Super Kings vs Royals