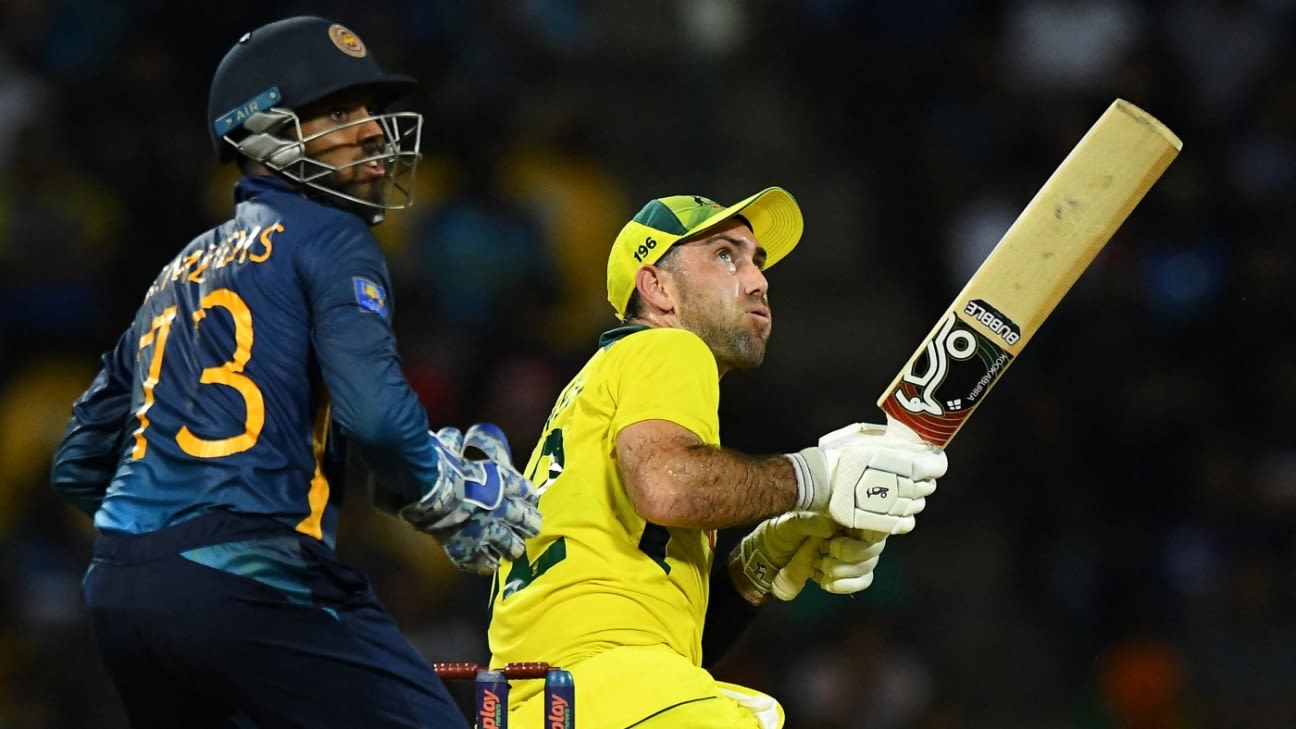 Australia 282 for 8 (Maxwell 80*, Smith 53, Hasaranga 4-58) beat Sri Lanka 300 for 7 (Mendis 86*, Nissanka 56, Gunathilaka 55) by two wickets (D/L method)
Sri Lanka put up a commanding score, got early wickets, were decent through the middle, and looked for much of the chase like they would defend the rain-adjusted 282 off 44 overs. But then, Glenn Maxwell, pulled the rug from under them with 80 not out off 51.
He arrived with Australia needing 93 off 84 balls, with five wickets remaining, and immediately took on the role of aggressor, on a Pallekele surface offering significant turn. Clearly he loves this ground, since he’d also struck a 49-ball T20I hundred here in 2016.
But this innings was more methodical. He waited for errors in length, and used the reverse sweep to good effect, to keep Australia’s requirement at roughly a run-a-ball. He trusted the lower order up to a point, but then was also good at farming the strike towards the close. He faced 15 of the 18 balls in the ninth-wicket stand with Jhye Richardson. And when he got balls in his area, he struck successive sixes off Dushmantha Chameera to win the match with nine balls to spare.
Wanindu Hasaranga, who was limping for much of the match, claimed four wickets to keep Sri Lanka in the hunt as well. Debutant left-arm spinner Dunith Wellalage also contributed two wickets, including that of Steven Smith. But Maxwell took both for plenty of runs, hitting 20 off 12 against Hasaranga, and 18 off 10 against Wellalage. That, essentially, is where he won the match.
Maxwell dominated the legside. All but one of his six sixes came in the arc between backward square leg and wide long-on. Only once did he seem slightly uncomfortable, and that was against the pace of Chameera, who by the end he had walloped for three sixes.
Wanindu Hasaranga worked through injury to produce a fine all-round performance•AFP/Getty Images
Earlier in Australia’s chase, Smith had hit 53 off 60, Finch made 44 off 41, and Marcus Stoinis provided the middle-order impetus following a long rain break, with his 44 off 31 balls, which featured four fours and two sixes. In all this, the highest partnership was the 67-run stand between Finch and Smith, and there was only one other fifty-plus stand. Sri Lanka kept taking wickets, but never in serious clumps.
Through Finch, Smith, Stoinis, Maxwell, and even Marnus Labuschagne and Alex Carey – who both got scores in the 20s – Australia kept pushing themselves closer, and crucially, puttered along at a good run rate. Rains came down when Australia were 72 for 2 in the 13th over, clipping six overs from the chase. Perhaps the slightly slippery ball and deliveries skidding on to the bat helped Australia somewhat. But there was rarely a point at which their batters did not look composed.
When they had begun the chase, the target was 301 off 50 overs, and Sri Lanka had mounted a score of 300 for 7 thanks to their openers, who put on 115 together, and Kusal Mendis, who hit 86 not out off 87. For the hosts, Pathum Nissanka made 56 off 68, and Danushka Gunathilaka hit 55 off 53, surging through the first 19 overs, before their wickets in quick succession slowed Sri Lanka’s progress. Mendis massaged them through that period however, with no little help from Charith Asalanka, with whom he forged a 77-run stand.
Sri Lanka seemed headed for a score of around 280 off their 50 overs, which seemed pretty good on a slow track, until Hasaranga crashed five successive fours off Jhye Richardson in the 49th over, and put Sri Lanka in the vicinity of that 300 mark. Hasaranga’s 37 came off 19 balls.
It seemed at that point that Sri Lanka had a fantastic chance of defending this total, because they had three frontline spinners in the XI, and Australia’s best bowler had been Ashton Agar, who took 2 for 49 from his 10. But these predictions clearly didn’t account for Maxwell. Sri Lanka will feel like they should have won this one. Maxwell’s hitting was just a little too good.
Tags: Australia, Australia in Sri Lanka, Dunith Wellalage, Sri Lanka, Sri Lanka vs Australia