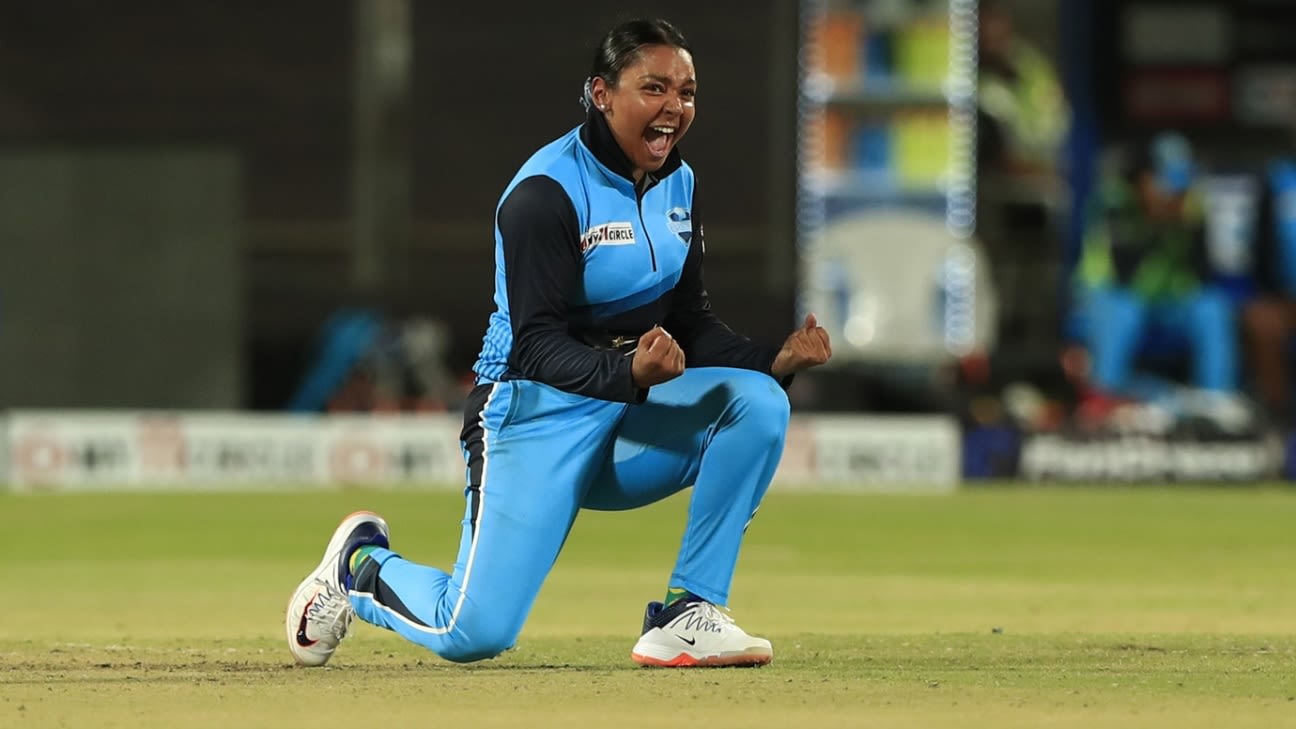 Australia legspinner Alana King has added her voice to those hoping that a women’s IPL is launched in the very near future having recently seen firsthand the “scary” depth of Indian domestic cricket.
King was part of the Supernovas team that won the Women’s T20 Challenge in Pune late last month, taking 3 for 32 in the final against Velocity. It was her first experience playing cricket in the country of her parents, Leroy and Sharon, who became familiar faces in the crowd during the last Australian season as King made an impressive start to her international career.
They immigrated to Australia in 1988 and King’s recent trip to the Challenge tournament was her first visit to India since 2016 – there is very likely to be another in December with five T20Is scheduled, but for the growth of the game all eyes on when the women’s IPL gets off the ground.
March 2023 has been mooted and it’s understood Cricket Australia has started to factor a window into their future planning.
“A lot of the girls are crying out for something like the IPL to start up,” King told ESPNcricinfo. “We’ve got the Big Bash, there’s the Hundred and the women’s IPL will be a really good tournament to showcase the Indian domestic players that I came to play alongside and get to know a bit.
“It’s scary to see the talent they’ve got in their domestic system. It will do Indian cricket a world of good as well as world cricket and I think everyone is just excited. The talk was hopefully there’s a proper IPL next year and I’ll definitely be putting my hand up for it…hopefully there’s enough traction. There’s definitely enough talent within India to start it up.”
Related
King said she had never experienced a crowd noise like the one made by 8621 who watched the final in Pune. “It was electric to be honest. I’ve never played in front of a crowd that was so loud you could barely hear yourself think.”
At the end of it, King was able to hold another piece of silverware to continue what has been an extraordinary year, at the start of which she had not even made her Australia debut. Since then she has played every international, slipping seamlessly into the vacancy created by Georgia Wareham’s long-term ACL injury, winning the Ashes and the ODI World Cup where she was the team’s second-highest wicket-taker.
The break after the World Cup was a welcome moment to take stock before she returned to training for the brief trip to India where she was the only Australian player involved.
“I have reflected a fair bit in the downtime of what’s happened with being called up then winning the Ashes and World Cup. It’s been a whirlwind six months,” she said.
The Australia squad will come together for the first time since the World Cup at a training camp in Brisbane next week which will mark the start of the post-Matthew Mott era after he left to take up the England men’s white-ball coaching job. Ben Sawyer, who was an assistant coach, is also set to be announced as New Zealand women’s new head coach on Monday.
Shelley Nitschke is the interim head coach for the upcoming tour of Ireland and Commonwealth Games and considered a frontrunner for the full-time role if she wants it. She has recently signed a two-year extension as head coach of Perth Scorchers in the WBBL, a job share she has done for the previous two seasons while an assistant to Mott in the national set-up.
King has the experience of playing under Nitschke as a head coach having joined Scorchers last season where she played a key role in their maiden WBBL title.
“Think it will be a very smooth transition for Shell,” she said. “Her and Motty have been working together for a fair few years now so operate quite similarly. Having a taste of what Shell’s like as a head coach at the Scorchers was everything I thought she would be.
“A cool, calm, collected human who has a bit of fun along the way. But when it’s time for business, it’s time for business. Think she’ll fit in seamlessly and I’m excited to be working under her.”
Tags: Alana King, Australia Women, Women's T20 Challenge