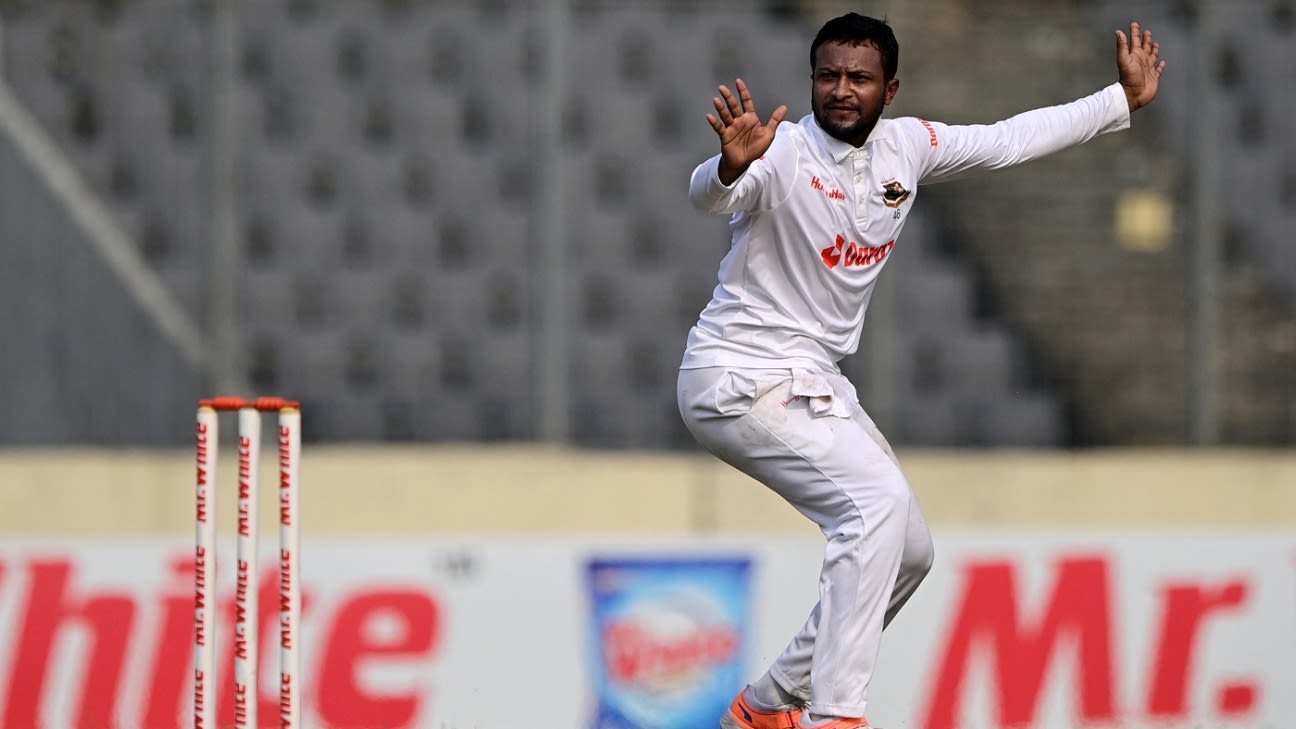 “We have to work on our mentality. I think there’s fear of failure among us”, Shakib Al Hasan said after Bangladesh slipped to 23 for 4 on the fourth evening, which seemed like a carbon copy of their collapse on the first morning, when they were 24 for 5.
The collapse could be decisive, with Sri Lanka needing only six wickets on the final day to clinch the Test series. Although Bangladesh have Mushfiqur Rahim and Litton Das, the two first-innings heroes, at the crease, with Shakib due to bat, their plight remains exposed.
Tamim Iqbal bagged the first pair of his Test career as the Bangladesh openers made it only the ninth occasion in Test history where the top-two batters got three ducks between them in a Test.
Bangladesh have scored eight ducks in the match so far, for the second time in their history. The top four scored just 34 runs in the match, their second lowest in a match.
Related
Shakib, who spoke at a press conference after a while, was repetitively asked for the cause of Bangladesh’s frequent collapses. He claimed that it was their mentality, not the lack of physical fitness, which bogged them down.
“I think we are one of the fittest teams in the world,” Shakib said. “We spend most of our time fielding in matches. I think we fielded around 400 overs [408] in this series. We are definitely fit, look at Litton who kept for 400 overs but came out and scored 141. Mushfiq bhai made 175 [in the first innings]. I think we are physically fit, but we are behind mentally. We have to work on our mentality. I think there’s [a] fear of failure among us. If we think otherwise, we might get better results.”
“We weren’t able to handle the pressure, and it has been happening like this recently. It happened when I was not in the team, and now it’s happening when I am in the team. We are failing in the second innings in the recent past. We had a chance to improve upon it, but we failed today as well. But we shouldn’t call it ‘the end’ before it ends.”

I am usually very confident with my bowling. I think I lost confidence only once or twice, but it is rare that I have worried about my bowling. The four [DPL] matches were enough. After playing for so long, a player doesn’t need 10 or 15-day camps. He needs three to five sessions.
Shakib Al Hasan on managing his bowling after a break

Shakib said that Najmul Hossain Shanto’s run-out, created by an unnecessary mix-up, was a consequence of the batters not being calm.
“It is disappointing for us,” Shakib said. “Run-outs, at this stage of the Test, is quite dangerous. One needs to be calm in these situations. There will be nervousness, people will have fear. But it is important to handle pressure in these moments. This is where Test cricket gets interesting.”
Shakib said that one way out of it is to remember how the player was successful in similar conundrums, and apply those learnings to overcome them.
“We have all faced similar problems in the past. We have seen both sides – success and failure. What is important is to remember what formula helped us become successful. Since we are not used to such a state of mind, it is vital that we keep it in our memory.
Shakib said that the remaining Bangladesh batters can save the game on the fifth day. But only if they can survive the first session without losing more than one wicket.
“I can help my team by batting for at least three hours,” he said. “If the overnight unbeaten batters can see off the first session, I can bat for another three hours, it will help the team [get to safety].
“It is hard to get batters out when they are set in this wicket. Their pacers will bowl five or six-over spells. We have to manage their threat. When the ball gets old and the bowlers get tired, the batsmen are set.”
Mominul Haque, has had low returns since becoming Bangladesh Test captain•AFP/Getty Images
Shakib, however, had a better day than most of his team-mates, as he got his 19th five-wicket haul in Test cricket. There was concern around his match fitness, ahead of the Test series, when he came into the Chattogram game two days after testing negative for Covid-19.
Shakib shrugged off those concerns by saying that he doesn’t need a long fitness camp at this stage of his career to get back into shape.
“I am usually very confident with my bowling,” Shakib said. “I think I lost confidence only once or twice, but it is rare that I have worried about my bowling. The four [DPL] matches were enough. After playing for so long, a player doesn’t need 10 or 15-day camps. He needs three to five sessions.”
“When I am not playing, I need five or six sessions. If you have fitness, you wouldn’t need anything more. Training isn’t important after playing for so long, but whether you are doing it purposefully or not [is].”
Shakib also backed Mominul Haque, who was dismissed for a single-digit score for the seventh innings in a row, to continue as captain.
Mominul averages 16.20 this year, and 31.44 as captain since 2019. Before being appointed captain, he used to average 41.47.
“It is a tough time for a captain but it is important for us to support him,” Shakib said. “We don’t have a better option that Mominul given our current situation in Test cricket. It is a matter of one inning, which will change everything.”
Tags: Bangladesh vs Sri Lanka, ICC World Test Championship, Mominul Haque, Shakib Al Hasan, Sri Lanka in Bangladesh