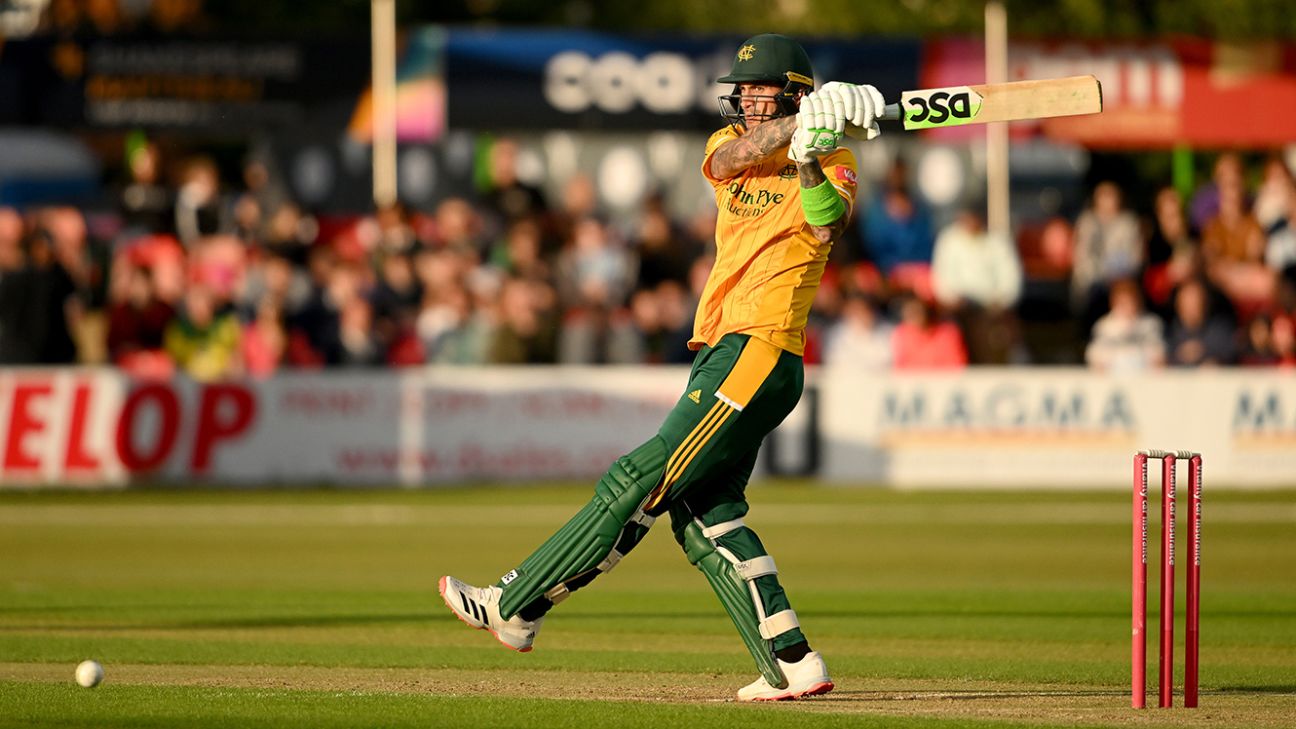 Nottinghamshire 127 for 5 (Hales 44, Duckett 44*) beat Leicestershire 123 (Mulder 32) by five wickets
Notts Outlaws kept their Vitality Blast campaign alive with a thumping win over Leicestershire Foxes at the Uptonsteel County Ground.
Having bowled out the home side for a dismal 123 in 19 overs, Outlaws were home and hosed with 6.4 overs to spare after opener Alex Hales had launched their reply by smashing 44 off 16 balls. Ben Duckett’s unbeaten 44 completed a five-wicket victory.
The Outlaws were missing leading wicket-taker Jake Ball, but Dane Paterson, Calvin Harrison and Luke Fletcher took two each in an efficient Outlaws bowling display on a pitch offering a modicum of help, only South African Wiaan Mulder, with 32, and Rishi Patel, 28, even remotely threatening to make a game of it.
Four-times semi-finalists and twice Blast champions in the last six seasons, Notts have won only three matches at the halfway stage of this year’s competition but with fixtures in hand over all their rivals in the North Group will still fancy themselves to book a quarter-final place. Leicestershire also have three wins but from two more matches and have lost all four home fixtures thus far.
Related
Skipper Colin Ackermann opted to bat first but a disappointing powerplay had left his side 31 for 3. Fletcher dismissed Lewis Hill and Arron Lilley off consecutives balls in the opening over and though Ackermann struck three boundaries he was stumped giving offspinner Matt Carter the charge, after which posting a competitive total looked a tall order for the Foxes.
Only Mulder – drafted in for his first appearance in the competition after New Zealand’s Hamish Rutherford was summoned as cover at Trent Bridge – cleared the ropes in the first 10, which also saw Scott Steel caught at midwicket for a stodgy 12.
Mulder lofted Harrison over long-on for a second six and Rishi Patel followed suit against his namesake, Samit, but when Mulder tried to repeat the treatment against Harrison’s legspin he sliced straight to long-off.
A strong finish was required but instead Leicestershire lost their last five wickets for 17 in 19 balls. Ben Mike was lbw as Harrison found some turn and Rehan Ahmed was beaten by Joe Clarke’s throw. Patel’s 28 off 29 ended when he was bowled trying to reverse-sweep before Paterson bowled Naveen ul-Haq and Will Davis to wrap the innings up.
Clarke and Hales needed only 14 deliveries to better the home side’s powerplay, and when Mike’s opening over went for 25, including 24 off the bat of Hales, the Outlaws’ boundary count was already higher than the Foxes managed in their entire innings.
Both openers then holed out in Naveen’s second over, which necessitated some regrouping by the visitors with two new batters at the crease, but Duckett ended the powerplay with three consecutive boundaries to make the score 81 for 2 and leave only 43 needed.
A couple of wickets for Callum Parkinson, who dismissed Samit Patel and Steven Mullaney with consecutive deliveries, and one for teenage legspinner Ahmed ensured that the Outlaws would not have everything their way but Duckett’s eight boundaries ensured there was no unexpected twist.
Tags: Alex Hales, Ben Duckett, Leicestershire, Leics vs Notts, Nottinghamshire, Vitality Blast