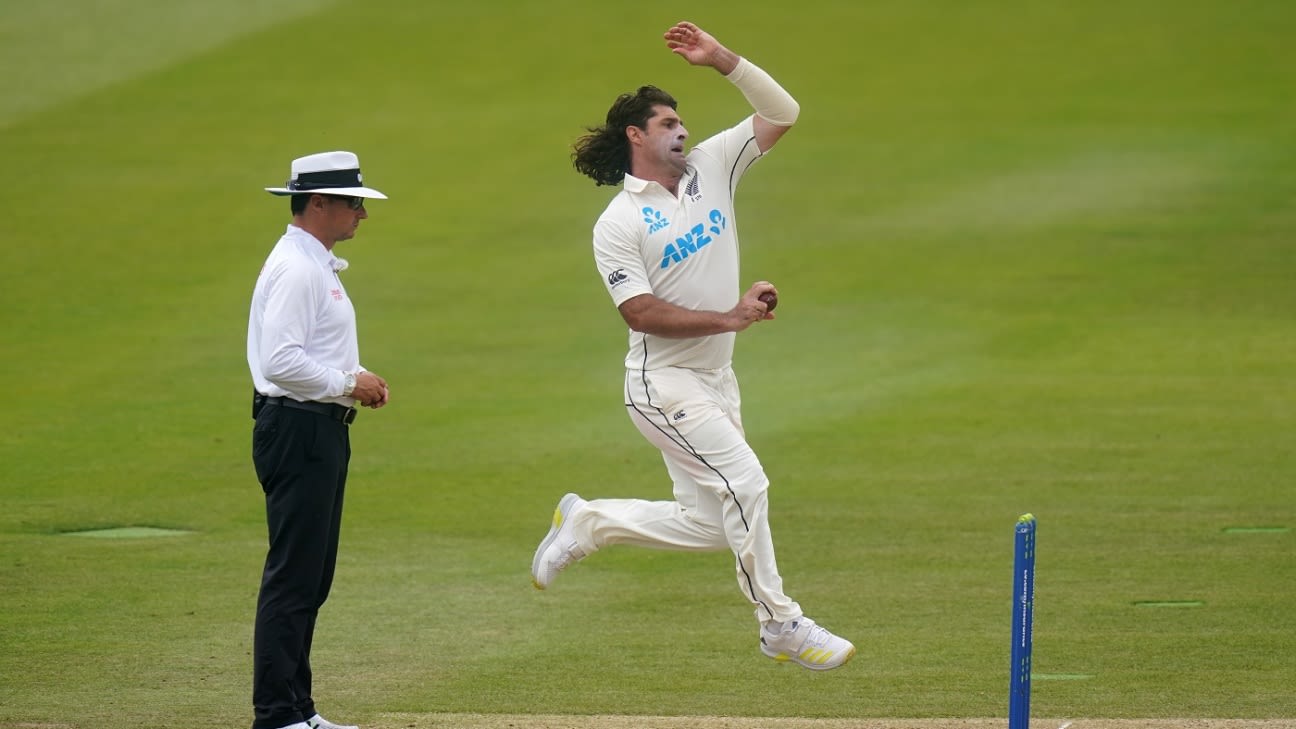 New Zealand 342 for 3 declared and 44 for 0 (Latham 20*, Young 20*) lead Sussex 247 (Orr 59, Haines 41, Duffy 2-17, de Grandhomme 2-26, Henry 2-36, Patel 2-84) by 135 runs
New Zealand’s bowlers had their day in the sun at Hove to keep their side in front heading into the final day of their pre-Test-series warm-up against Sussex.
Jacob Duffy, Colin de Grandhomme, Matt Henry and Ajaz Patel claimed two wickets each to bowl the home side out for 247, still 95 runs adrift. Duffy did what he could to press his claim for a Test debut when the Black Caps face England next month as arguably the pick of the visiting bowlers with 2 for 17 from 12 overs, while Kyle Jamieson bowled with good pace but went unrewarded, conceding just 37 runs from his 14 overs.
New Zealand openers Tom Latham and Will Young then guided their side to stumps without loss in their second innings, both closing unbeaten on 20 and no doubt hoping for some more time in the middle on Monday, although a return of the rain which washed out the opening day could have yet more influence on this match.
Related
New Zealand declared on their overnight score of 342 for 3, built on half-centuries to Latham, Young, Michael Bracewell and Tom Blundell.
Ali Orr, the 21-year-old Sussex opener, reached his half-century, including twin sixes down the ground off one Patel over and another carbon copy, again off Patel, a little while later. Left-hander Orr shared a 56-run stand with Tom Haines, who was on 41 when he fell to de Grandhomme, caught at first slip by Young.
It was the first of a clutch of wickets to fall as Sussex lost three for nine in the space of three overs as Duffy had Tom Alsop caught behind and then trapped Tom Clark lbw, both departing for a duck.
Orr finally fell lbw to Henry before Fynn Hudson-Prentice, the bowling allrounder making his way back from a stress fracture in his back and therefore playing as a batter in this friendly match, added a confidence-boosting 34 from 64 deliveries, including six fours, before providing de Grandhomme’s second scalp, falling to a gem that ripped out middle stump.
Oli Carter and Danial Ibrahim put on 49 runs for the sixth wicket and the hosts were 181 for 5 when Rachin Ravindra entered the attack on the cusp of the tea break.
Ravindra dragged his first ball down short and Carter duly smacked it towards midwicket but only managed to get two for it. His second ball was a short one down the leg side which Carter pulled for four, but Ravidra broke through with his fourth ball of the over, bowling Ibrahim round his legs with a full delivery.
Carter followed for 31 shortly after the post-tea resumption when Henry sent his off-stump cartwheeling.
Patel picked up the wickets of Delray Rawlins and Jamie Atkins but Ollie Robinson – who after being overlooked for the first two Tests against New Zealand amid concerns over his fitness managed 18, albeit wicketless, overs during the visitors’ first innings – compiled an entertaining knock of 36 from just 23 balls.
Robinson struck Patel twice over mid-on and then through midwicket for three fours in four balls and collected two more in four deliveries from off the left-arm spinner, swept through fine leg and cut towards point, before he was the last man out, caught by Duffy off Bracewell.
With Haines off the field late in the evening session, Robinson assumed captaincy duties and is yet to bowl in New Zealand’s second innings.
Henry said he and his team-mates enjoyed the hit-out and he praised the efforts of fellow seamer Duffy.
“It was important for us to get that time in the legs and adapt to the conditions and the ball here so I think the guys would be really happy with that,” Henry said. “Just getting that competitive edge, getting going, and I think everyone enjoyed that, getting in the fight out there. It’s very different to being in the nets, the time on the feet, getting used to multiple spells was really good.
“He [Duffy] has done a great job for a long time really at home and I think there’s no surprise that he would suit the English conditions as well, that beautiful outswinger he’s got, so it was really good for him today to get the opportunity to just test where he’s at and he did a great job.”
Tags: Ali Orr, Colin de Grandhomme, Jacob Duffy, Matt Henry, N Zealanders vs Sussex, New Zealand, New Zealand in England, Ollie Robinson, Sussex, Tom Latham