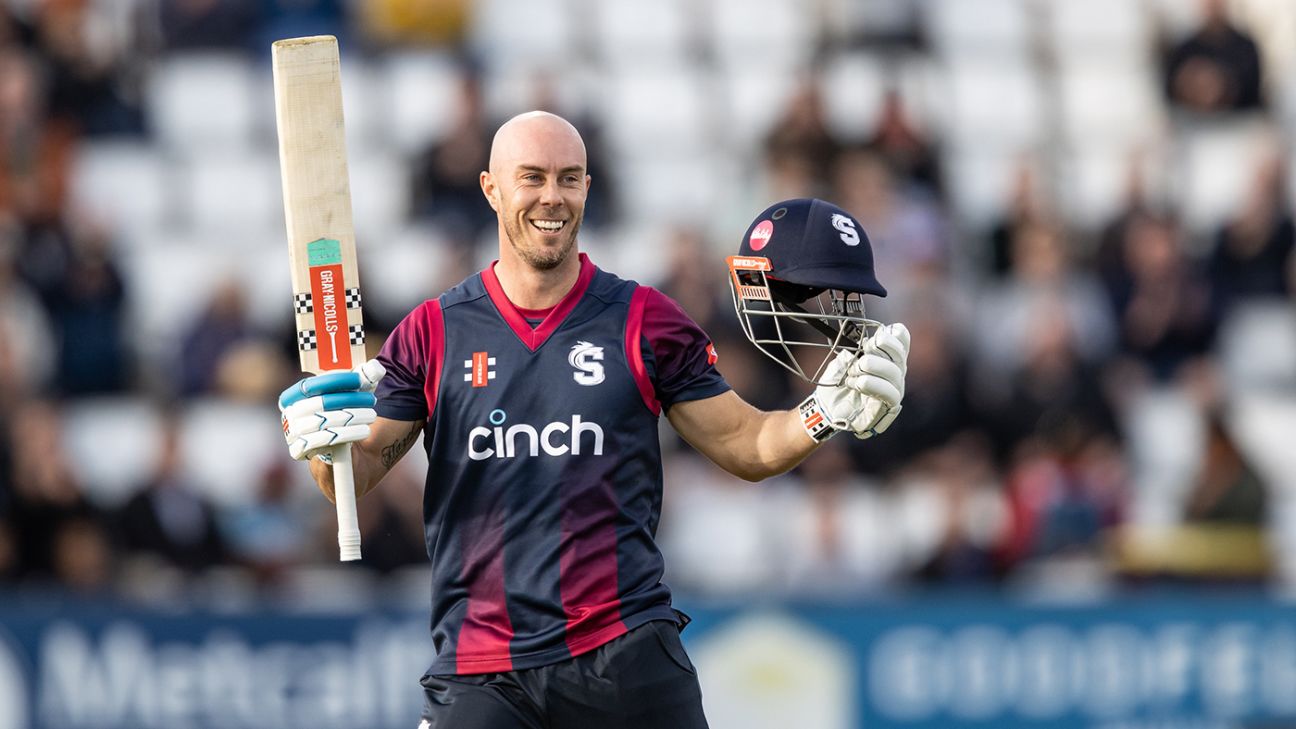 Northamptonshire 220 for 3 (Lynn 113*, Cobb 50) beat Worcestershire 147 (Barnard 42, Cobb 5-25) by 73 runs
Chris Lynn continued his purple patch with another unbeaten century as Northamptonshire Steelbacks cruised past Worcestershire Rapids by 73 runs to climb to second in the Vitality Blast North Group.
The Steelbacks opener struck 113 not out from 57 balls, despite batting with a runner for part of his innings, to equal his highest score in T20 cricket and set up Northamptonshire’s third straight victory. It was a second Blast hundred for Lynn, who averages almost 95 in the tournament so far, and his second-wicket stand of 115 from 62 with skipper Josh Cobb laid the foundations for their side’s winning total of 220 for 3 at Wantage Road.
Worcestershire, who have now lost six of their seven matches, never looked like getting close and subsided tamely to 147 all out, with Cobb claiming career-best figures of 5 for 25.
Rapids handed a T20 debut to Jacques Banton – younger brother of Tom – and also entrusted the left-arm spinner with the new ball, a move that brought instant rewards as Ben Curran reverse-swept his third delivery into the hands of backward point.
Aside from two isolated sixes off Dillon Pennington, Lynn looked relatively sedate at the other end and initially it was Cobb, hitting over the leg-side infield, who brought impetus to the Steelbacks’ innings. But Lynn began to get into his stride after the powerplay, with Pennington taking the brunt of the assault as the Australian dispatched two colossal maximums over midwicket to bring up his half-century from 25 balls.
Cobb was just two deliveries slower to that landmark – his second successive 50 – but the captain got no further, drilling Dwayne Bravo to long-off, where Moeen Ali stretched to take the catch above his head.
Despite being hampered by a niggle that meant Curran returned to act as his runner, Lynn continued unabated, clattering Ed Barnard for three consecutive sixes and advancing to his hundred. The shrewd Bravo, with figures of 2 for 15, was the only bowler to establish any kind of control as Saif Zaib and Jimmy Neesham, with an unbeaten 24 from 11 balls, steered Northamptonshire beyond 200.
The visitors immediately sank into trouble when they replied, with Jake Libby patting the second delivery of the innings straight to square leg before Tom Taylor ripped out Moeen’s middle stump. Taylor had Colin Munro caught behind two balls later to leave Worcestershire teetering at 16 for 3, but Jack Haynes launched a brief bid to rescue the situation single-handedly, with some clean hitting producing a string of boundaries.
Once Haynes had holed out to long-off for 33, Rapids continued to crumble, with Cobb’s offbreaks accounting for five wickets, including those of Ben Cox and Banton in successive balls.
Barnard prolonged the visitors’ resistance with a defiant 42 from 29 before he was the last man to depart, caught by Freddie Heldreich at backward square with 20 balls unused.
Tags: Chris Lynn, Josh Cobb, Northamptonshire, Northants vs WORCS, Vitality Blast, Worcestershire