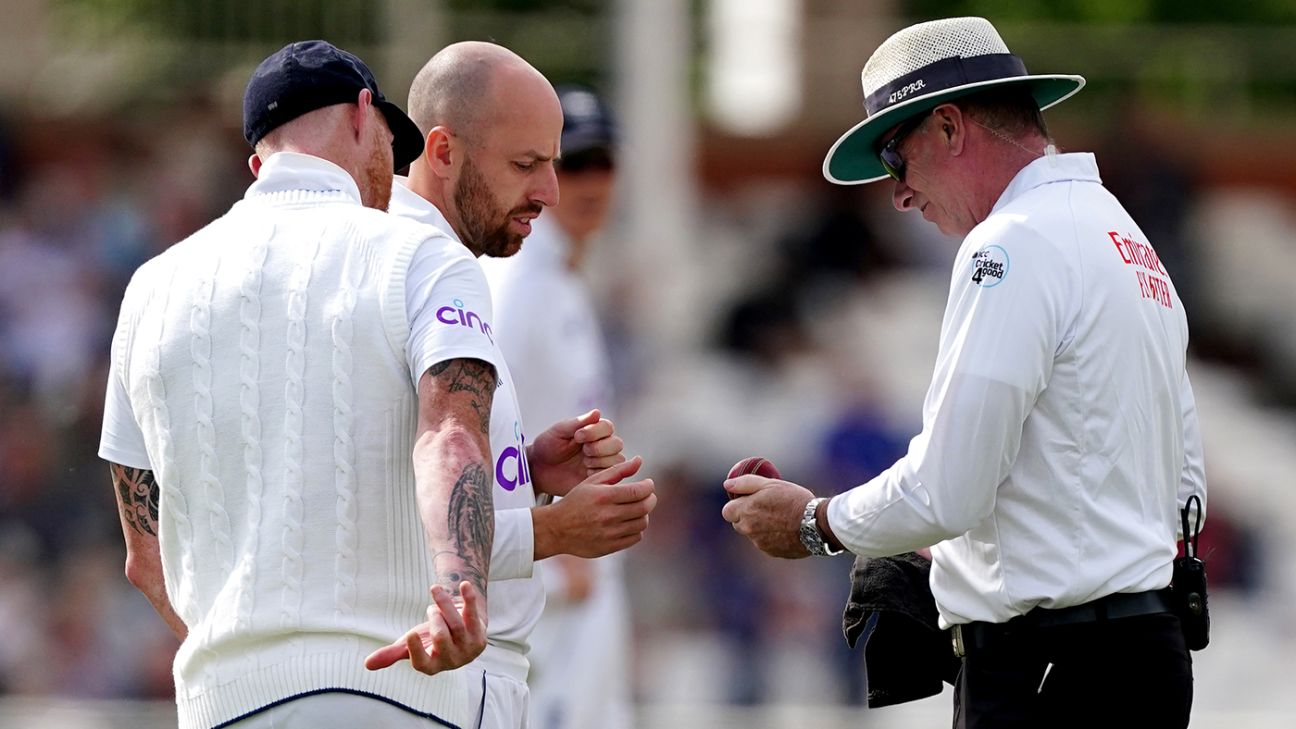 When Daryl Mitchell struck Jack Leach into the crowd in front of the pavilion during the evening session at Trent Bridge, it didn’t just cost the England spinner six runs. Mitchell’s blow landed with a splash in a spectator’s pint, and might well have contributed to the day going flat for the home side.
The ball, which was 55 overs old at the time, had to be vigorously wiped down after coming back covered in beer (or possibly cider). Although England had tried to get the ball changed on more than one occasion previously, they were told to continue with it and struggled to make further inroads as Mitchell and Tom Blundell put on an unbroken stand worth 149 come the close.
England’s seamers had enjoyed their best spell during the afternoon, finding swing with the older ball. New Zealand batter Devon Conway said after play that it “certainly didn’t swing as much” after going for a dip, and admitted that the tourists had been surprised that the umpires didn’t call for a replacement.
Related
“We were quite shocked that they didn’t change the ball, with all the Covid protocols put in place these days, we thought that they might have looked to have changed it,” Conway said. “I think certainly it didn’t swing as much. So I think Daryl played a very smart role there, to make sure the ball didn’t swing as much. Yeah it was an interesting period. I think I did see the umpire trying to dry it as much as he could with a towel. If that did play a role, I don’t know.”
It also transpired that New Zealand had arranged to buy a replacement pint for the female spectator whose drink was so dramatically dive-bombed, with Conway jokingly suggesting that Mitchell should cover the cost after finishing the day on an unbeaten 81.
England, after opting to bowl, might have felt events were beginning to transpire against them. If Joe Root had held a regulation outside edge when Mitchell had made 3, New Zealand would have been 170 for 5; in the end, England managed just the four wickets and saw four clear chances go begging, as they were thwarted for the second time in as many weeks by Mitchell and Blundell.

The question of whether this year’s batch of Dukes balls have been as swing-friendly – or even durable – has been a theme during the early part of the season, and England could be seen repeatedly in discussions with the umpires about whether this one had gone out of shape, before and after the dunking. Jon Lewis, England’s bowling coach, acknowledged there had been some concerns but said it was a problem they would have to learn to deal with.
“I wasn’t out there, I haven’t spoken to the boys about it,” Lewis said. “It did swing a little bit less [after landing in the cup], but it’s just I think the ball was really soft. When the ball goes soft it’s hard to get it past the bat with any pace. It changes the game a little bit.
“I think we’ve just got to find a way [to take wickets]. It’s obvious that the balls are going a little bit soft, and a little bit out of shape, but they’re still going through the hoops. It’s something we’ve got to find a way to take wickets with the balls that we’re given to play with.”
Tags: Daryl Mitchell, England, England vs New Zealand, Jack Leach, Jon Lewis, New Zealand, New Zealand in England