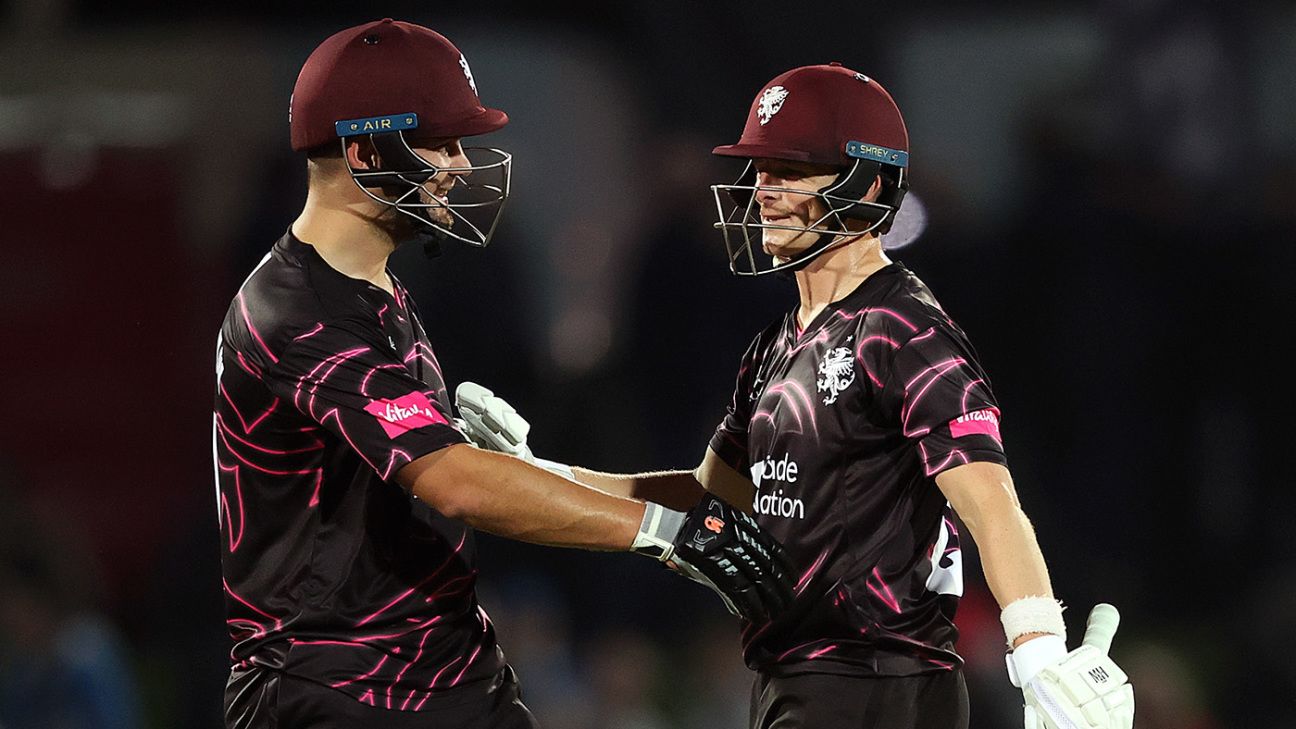 Somerset 166 for 2 (Rossouw 81*, Abell 48*) beat Kent 162 for 6 (Leaning 72*, Gregory 3-25) by eight wickets
Somerset’s decision to recruit an extra overseas batter for the Vitality Blast paid instant dividends on the competition’s opening night at Canterbury, as Rilee Rossouw’s 81 not out helped them exact revenge on Kent in a rematch of last year’s final.
With Peter Siddle and Marchant de Lange both initially under contract for the Blast, it came as something of a surprise when Somerset delved back into the market last month but Andy Hurry, their director of cricket, was keen to add an experienced player – and, crucially, a left-hander – to their talented young batting line-up. That left Siddle, the BBL’s leading wicket-taker last year, surplus to their T20 requirements.
Rossouw, who had already signed for Oval Invincibles, fitted the bill and agreed to fly over two months ahead of schedule. His capture did not elicit much of a response – “not exactly Babar Azam or Devon Conway. Would struggle to get into a first-choice Somerset T20 team,” one local broadcaster tweeted – but his innings on debut took them over the line in a tricky chase.
Kent’s success last season hinged on a simple gameplan: win the toss, post an above-par score and trust their bowling attack to defend under pressure. Eleven of their 12 wins came batting first, including all three of their knockout games.
Related
But Sam Billings, back home after a frustrating IPL season which saw him come in and out of Kolkata Knight Riders’ side, admitted he made a mistake by choosing to bat on the night: “In hindsight, of course it was the wrong decision,” he said. On a slightly damp, two-paced wicket offering early movement for the seamers, Kent slipped to 33 for 4.
They rebuilt admirably, with Jack Leaning – whose key role in their title last year slipped under the radar – leading the way. Recognising that 140 wouldn’t cut it, he played with attacking intent from the start and swiped five sixes in his unbeaten 72, all of them over the leg side.
The innings turned in the 16th over when Tom Abell, in his first game as Somerset’s full-time T20 captain after taking over from Lewis Gregory, threw the ball to his left-arm spinner, Lewis Goldsworthy. Jordan Cox had chipped him to cover in his first over, which cost only four runs, but Abell failed to account for the fact that the new batter, George Linde, was a left-hander.
That meant he could target the short leg-side boundary, hitting with the spin. Linde lofted two sixes and a four to that side, the over cost 20, and Abell learned that next time, he should listen to the analyst’s pre-match advice about match-ups. “I probably made a few tactical errors,” he reflected with a smile.

What an innings in his first match for the club!#Blast22 pic.twitter.com/HWOKBYCOlw

It was a smile he could afford, after his own part in an unbroken stand of 121 in 12.1 overs with Rossouw. It was at Canterbury four years ago when Abell was confronted with the reality of his T20 shortcomings, making 21 not out off 18 balls as Somerset fell just short in a 457-run game; it proved a wake-up call, and he has been one of the country’s most-improved short-form batters in the years since.
He could afford to play second-fiddle for most of his innings, as Rossouw paced his innings to perfection. Kent’s two overseas players, Qais Ahmad and Linde, were both spinners whose stock balls turns into the left-hander and Rossouw’s presence rendered them unusable from one end, with Billings rightly spooked by Linde’s own takedown of Goldsworthy.
Rossouw ensured it was an expensive night for them regardless, playing expansively through the off side as the spinners looked to defend the longer boundary up the hill. “Come on, Qais bhai,” Billings said over the stump mic as Rossouw charged down and lofted him over extra cover for six but the Afghan legspinner endured a rare off-night, with Abell slog-sweeping him for six more over long leg as he struggled to grip the ball in the dew.
Rossouw played three seasons of Blast cricket as a Kolpak player at Hampshire and rarely fired, but his record around the world – particularly in the PSL for Multan Sultans earlier this year – is excellent and Abell had no hesitation in labelling him “world-class”. He made 156 in a 50-over game at Taunton five years ago and will enjoy the short boundaries there this season.
Billings had to rely heavily on his seamers, but despite the early dismissals of Tom Banton and Will Smeed, they struggled for potency and with wickets in hand, the chase was a cruise. “We just got outplayed, unfortunately,” Billings reflected. “They played outstandingly well. It’s a long tournament and it’s good to get a performance like this out of the way early on.”
Tags: George Linde, Jack Leaning, Kent, Kent vs Somerset, Rilee Rossouw, Somerset, Tom Abell, Vitality Blast