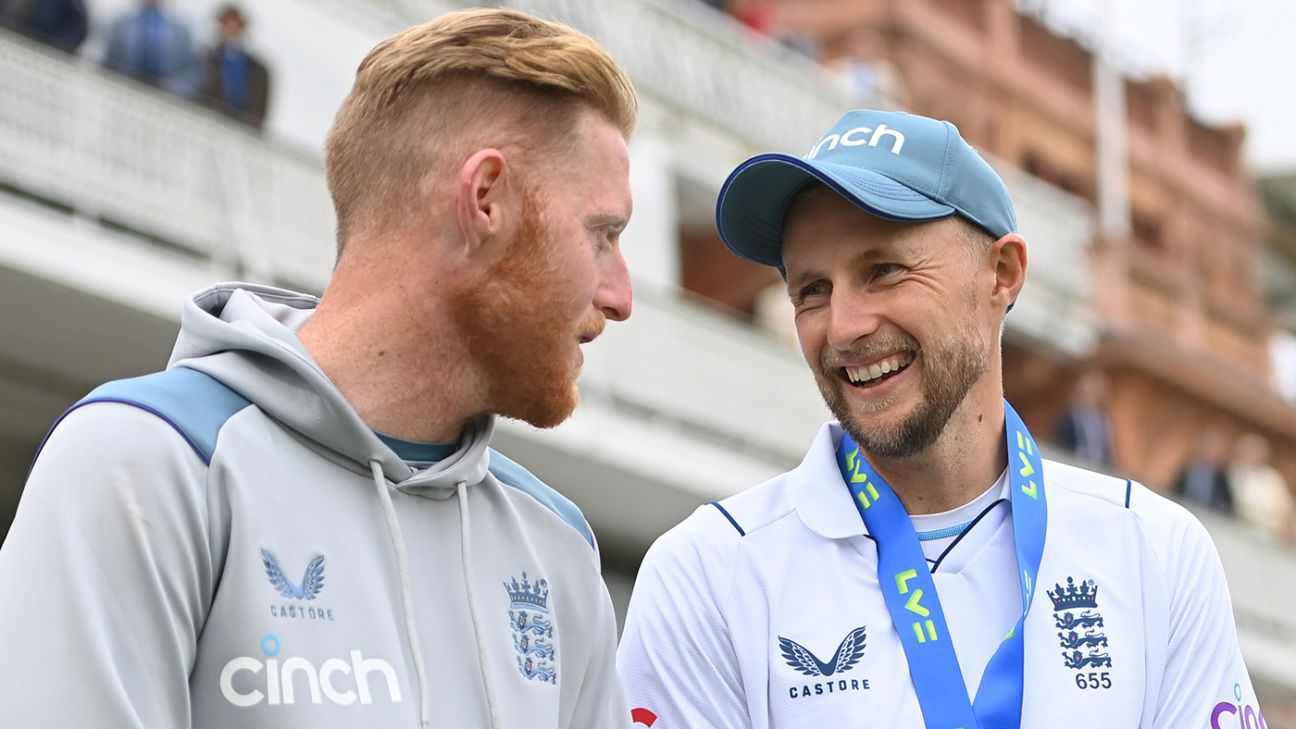 The emotion was plain for Joe Root as he soaked up the acclaim from an enraptured Lord’s crowd. A phenomenally composed 115 not out, his 26th Test hundred but his first in the fourth innings, had guided England to a gripping five-wicket win over New Zealand in the first Test of the English summer, and ended a barren run of results that stretched back 10 months to the Headingley Test against India.
But perhaps more significantly, it was a century in Root’s first appearance back in England’s ranks, after stepping down from a role that he had held with pride for five years and a national-record 64 matches, but which he admitted after the match had become an “unhealthy relationship” in its grim final throes.
England won just one of their last 17 Tests under Root’s leadership, including a 4-0 defeat in the Ashes and a further 1-0 reverse in the Caribbean in March. And though he insisted in the immediate aftermath of that campaign that he still had the drive to take the team forward, Root conceded upon his return to the UK that the pressures had become too much to bear.
“It had become a very unhealthy relationship to be honest, the captaincy and me,” Root admitted after his innings on Sunday. “It started to really take a bad toll on my own personal health. I couldn’t leave it at the ground any more, it was coming home. It wasn’t fair on my family, on people close to me, and it wasn’t fair on myself either.
Related
“I had thrown everything at it and I was determined to help turn this team around but I realised over that time at home that it would have to be in a different way. I’m very excited to do that now and to do everything I can to help Ben [Stokes] really turn this team around and make this team the force it should and can be.”
There was little about Root’s form with the bat in the latter months of his captaincy that let on about the mental toll the role was taking – quite the contrary in fact. He amassed an England-record 1,708 runs at 61.00 in 2021, just 80 runs shy of Mohammad Yousuf’s all-time record, and though he endured a dip in form towards the end of the Ashes, his back-to-back hundreds in Antigua and Barbados earlier this year seemed to have signalled his determination to keep leading from the front.
Privately, however, Root acknowledged he was feeling the strain of propping up an under-performing team, and while taking a break from cricket at the end of the Caribbean tour, he announced it was time to step down.
“I obviously tried as much as I could, but I think I was unaware of how much it was grabbing hold of me,” he admitted. “I just needed to make the decision, and I knew it was the right thing to do. I felt like a big weight had been lifted and I immediately felt a lot better.
“As hard as it was, obviously it’s been a huge privilege and something that I’m extremely proud to have done, but it’s time for a new phase in my career. And it’s one that I’m very much looking forward to, seeing one of my best mates now take this team forward and start in a way that he has.”
Stokes himself played a big part in securing victory in his first outing as official captain, scoring a chancy but vital 54 to help break the back of a 277-run chase on the third afternoon. But, once he fell to Kyle Jamieson with 118 runs still needed, Root stepped up his own tempo to score his final 81 runs from 81 balls, and ease England home in company with Ben Foakes.
“This is a very nice feeling,” Root said in the aftermath of England’s win. “It’s felt like a long time. But it’s one that you want to feel over and over again. So, again, having experienced that this week, it’s one that we want to make sure that, when we turn up to Trent Bridge, we’re on the right side of it again, and can feel it again.”

The reception for Root in the Lord's pavilion

In the moment of victory, Root paused on the edge of the boundary, shaking hands with the New Zealand players and support staff before taking a memorable walk of honour through the pavilion, where he was applauded by the members, and greeted by a line-up of his team-mates, led by Stokes, with Jonny Bairstow, Stuart Broad and James Anderson close behind.
“It meant a huge amount to me,” he said, “not just personally, but when you walk through the dressing-room or through the Long Room and you’re high-fiving the rest of the group, and you can see the genuine joy and elation on their faces. That’s the one thing that I’ve missed the most, I suppose, over the last year and a bit. And one thing I’m really looking forward to seeing a lot more of, hopefully, this summer.”
Root admitted that the chance to pay Stokes back for the many match-winning displays under his own captaincy had been an additional motivating factor in his performance.
“It’s my turn now,” he said. “That’s a great motivator for me moving forward, with the amount of amazing things Ben did for this team under my leadership. It’s a great opportunity for me in the next phase of my career to do that for him. I’m not sure I’ll be able to do some of the things he has done but I can certainly try. It’s nice to do that today.”
Stokes, however, dismissed his team-mate’s modesty. “There is never any doubt about Joe stepping up on the big occasions,” he said. “He didn’t have to speak so nicely about me, because he’s playing the next game whatever happens.
“Everything that he’s spoken about with the captaincy, to see him walk off there, leading the team to victory, seeing the emotion of pure joy and happiness to win a game for England in his first game after stepping down as captain was amazing.
“We are very close, we’re not just work colleagues together. As emotional as it was for him, it was fantastic for me to see a very close friend walk off after leading England to victory. It was a great day.”
Tags: Ben Stokes, England, England vs New Zealand, ICC World Test Championship, Joe Root, New Zealand, New Zealand in England