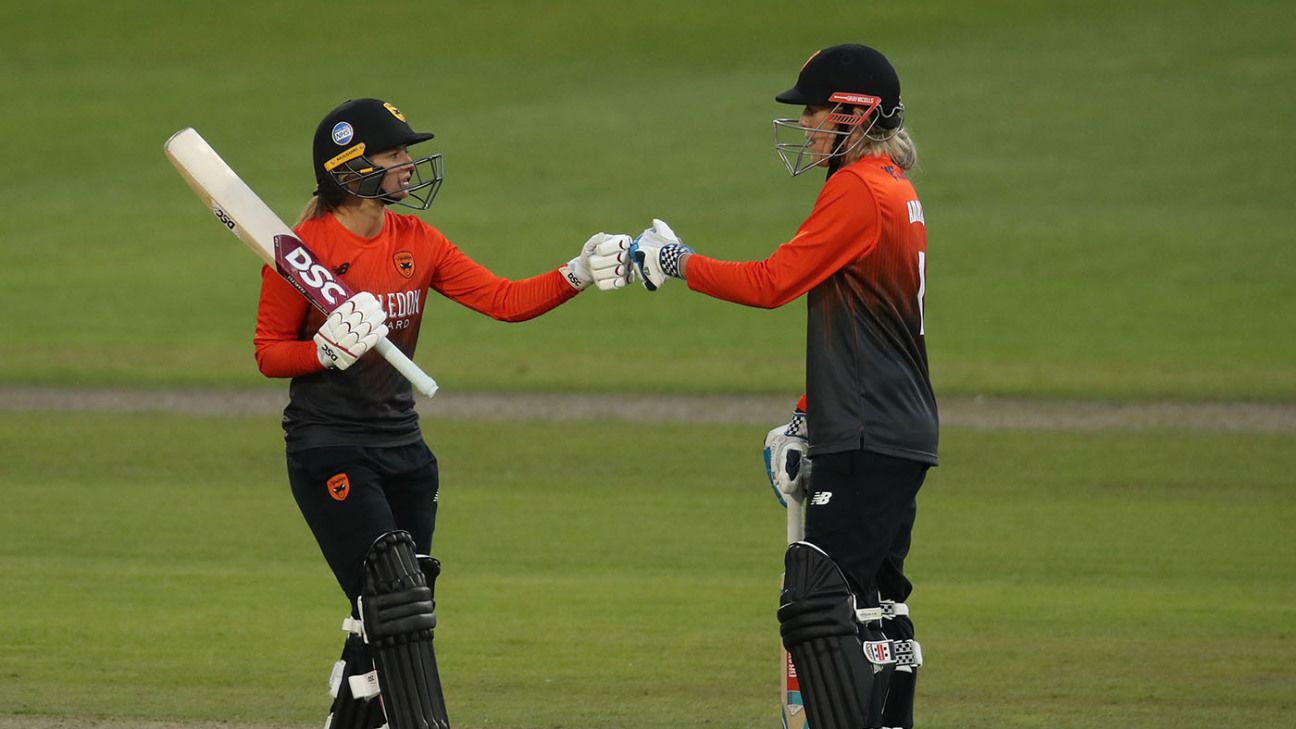 Southern Vipers 144 for 4 (Adams 47, Wyatt 35) beat Northern Diamonds 141 for 4 (Sciver 50, Armitage 48*) by six wickets
Sweet hitting from Danni Wyatt and Georgia Adams made sure Southern Vipers completed the Charlotte Edwards Cup group stage with a 100 percent record, ending Northern Diamonds’ campaign in the process.
England opener Wyatt thrashed an exhilarating 35 off 16 balls before Adams all but finished off the job with 47 – with Vipers already qualified for next Saturday’s final at Wantage Road in Northampton.
Nat Sciver scored a classy fifty in her first match since her marriage to England and Diamonds team-mate Katherine Brunt as Diamonds set a target of 142 in a game they needed to win to hold any hope of progressing.
But Wyatt and Adams knocked off the runs with 10 balls to spare to celebrate a six-wicket victory and gain atonement for losing out to the Diamonds in last year’s Eliminator.
Wyatt was ostentatious. First ball: cut forcefully. Second ball: driven square with power. Fourth ball: advance and splice over point. Sixth ball: smashed over cover. Seventh ball: guided down to the third ropes. All five balls went to the boundary as the experienced batter rushed to 21 in seven balls.
She used Sciver’s pace to find fours on either side of the wicket, but her fun ended in the fourth over when she anticlimactically cut Katie Levick to point. But the damage had been done.
Adams was given two lives – a steepling chance dropped and then a missed stumping – during a scratchy start to her innings, while Ella McCaughan was also twice put down.
Adams struck herself into form with a straight six shadowed by three languid swings to the boundary in the following five balls. She was dropped again but made sure Vipers’ chase was in complete control.
Her luck ran out when she was caught at square leg before Charlie Dean was caught and bowled two balls later. But McCaughan and Freya Kemp knocked off the final 16 runs in front of 2,400 spectators at the Ageas Bowl.
Earlier, having been asked to bowl, Vipers’ Dean took her competition tally to 10 as she pinched the early wickets of Bess Heath and Stere Kalis. The off-spinner returned figures of 2 for 24.
Sciver largely went under the radar as she nudged her score upwards. Her first three boundaries were all helped around the corner, before finally showing her more usual bombast by powering through midwicket.
She unleashed back-to-back fours off England hopeful Lauren Bell – firstly straight and then freeing her arms through point. A superb scoop took her boundary count to seven as she reached a half-century in 37 balls before she was run out by Maia Bouchier’s direct hit.
Hollie Armitage was also circumspect, punishing width and shortness with disdain during her 69-run stand with Sciver. She ended up unbeaten on 48 as Diamonds finished up on 141 for 4 – with 15 coming off the 20th over.
Tags: Charlotte Edwards Cup, Danni Wyatt, Diamonds vs Vipers, Georgia Adams, Hollie Armitage, Nat Sciver, Northern Diamonds, Southern Vipers