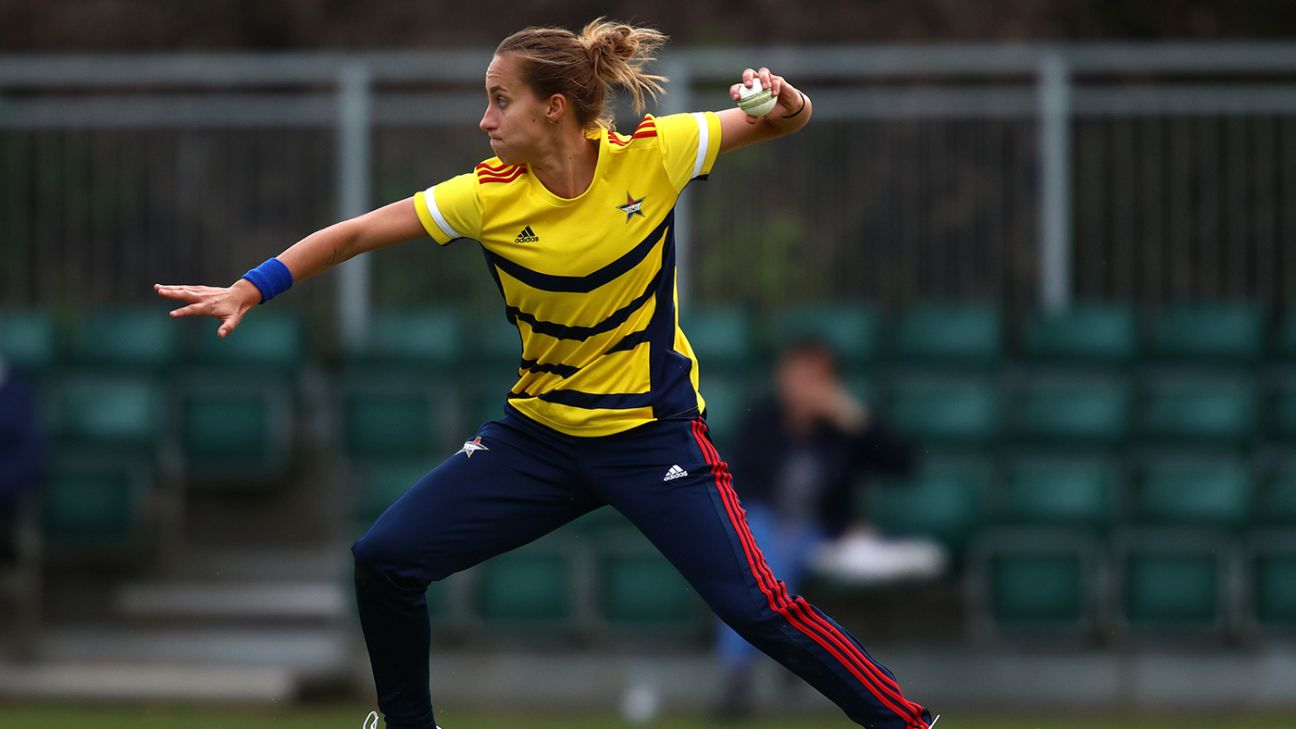 Tash Farrant, the England seam bowler, has been ruled out for the season with a stress fracture in her back.
Left-armer Farrant felt some discomfort after playing for South East Stars in the Charlotte Edwards Cup earlier this month and scans revealed the fracture.
She is expected to be sidelined for six months, possibly returning to regional cricket slightly earlier as a batter if her recovery goes to plan, but she will miss England Women’s home series against South Africa and India, as well as Oval Invincibles’ defence of their women’s Hundred title.
“England and South East Stars bowler Tash Farrant has suffered a lumbar spine stress fracture,” the ECB said in a statement. “The medical teams at England and South East Stars will work together on her rehabilitation.”
Farrant was one of a handful of young seamers hoping to stake a claim for an extended run in the England team after Anya Shrubsole’s retirement from international cricket following the World Cup in New Zealand, but her injury is likely to see Freya Davies get first crack at the vacancy.
It is a cruel setback for Farrant, who recently returned to the England fold after nearly three years on the outer. She regained her central contract for the 2022 season, having lost her deal in early 2019. Following impressive domestic performances in the Rachael Heyhoe Flint Trophy in 2020, she was selected for England’s tour of New Zealand at the start of 2021.
Related
Having played two ODIs and one T20I on the tour of New Zealand, Farrant was the leading wicket-taker in the inaugural women’s Hundred competition last year, with 18 wickets at an average of 10.27. She was instrumental in securing a place in the final with her 4 for 10 from 19 balls in the eliminator against Birmingham Phoenix.
She was part of England’s Test, ODI and T20I squads for the multi-format series with India last June and July without playing a game, and returned to international action for England’s white-ball series with New Zealand later in the summer.
Farrant was part of the England Women’s squad which reached the final of the ICC Women’s World Cup in New Zealand in April, although she did not play any matches during that tournament.
Her most recent appearance for England was against Australia in the third ODI in Melbourne, her only match of the Ashes series, when she scored 7 then went wicketless and conceded 44 runs from 6.2 overs. She last played T20Is when New Zealand toured England in September 2021.
In early May, she was part of the Sapphires side at the FairBreak Invitational Tournament in Dubai shortly before linking up with South East Stars for the Charlotte Edwards Cup.
Tags: Charlotte Edwards Cup, England Women, Oval Invincibles (Women), South East Stars, Tash Farrant, The Hundred Women's Competition