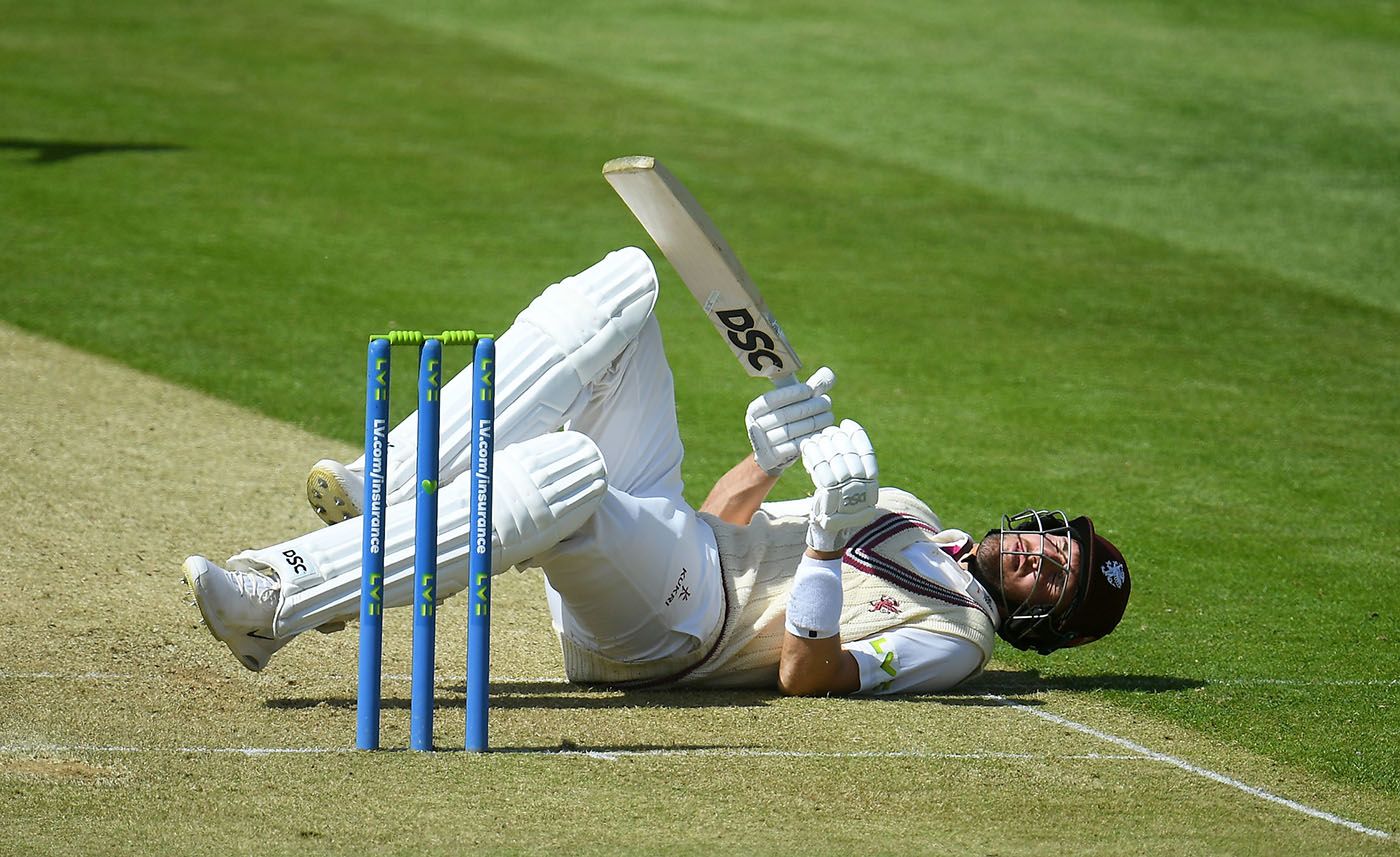 Surrey 56 for 1 (Burns 35*, Amla 19*) trail Somerset 180 (Worrall 3-28, J Overton 3-34, Atkinson 3-40) by 124 runs
Craig Overton and Jamie Overton had always played on the same side since childhood and judging by the outcome at Taunton on Sunday, perhaps it was just as well. It took only two balls before the sound of ball against helmet clanged around the ground and Craig fell to the ground. This was very much Jamie O’s day.
Jamie Overton at his most potent was a fine sight, reviving faded hopes that he might yet follow his twin brother into the England side, but it was probably more disconcerting for Craig as he took guard 22 yards away. That their confrontation would result in a short ball or two was inevitable, as was the attempted hook shot in response, but Craig failed to make contact and took a sickening blow on the side of the helmet.
Jamie had anticipated the match-up with relish at the start of last season, only for Craig to be missing from both four-day matches as he began to build an England career. “Knowing what we’re like, we will be very competitive,” Jamie had reflected. “And we won’t be taking it easy on each other, that’s for sure.” An extra year’s wait had not dimmed his enthusiasm for the fray: Jamie faced 11 balls from Craig at The Oval in April, but this was the first time he had bowled to him in the Championship.
As Craig lay poleaxed on the ground, and Somerset’s physios ran on to gently extricate him from his helmet, Jamie’s massive frame briefly passed by, only for him to keep walking in search of an energy drink. The Somerset player he did share a chat with was the non-striker, Josh Davey, who appeared to see the light-hearted side as Craig received treatment.
Craig retired not out, on 20, for a concussion assessment, pride hurting most of all, and it needed to be a quick assessment because in his next over Jamie also hit Davey on the helmet as he ducked into another menacing short ball. Davey also departed, to be replaced by Craig, who had been passed fit to resume. Davey was not so fortunate and he was forced to withdraw from the match with Kasey Aldridge called in as a concussion substitute.
“Of course, I didn’t want to hit Craig,” Jamie said. “He made it clear straight away that he was ok. I knew there was no cause for concern, but it was the first time I had bowled to him since moving to Surrey and quite a strange experience. To be honest, he didn’t play the delivery too well!
“Unfortunately, I then hit Josh Davey as well, but I have seen him since and he is okay too. I bent my back in that spell. It wasn’t that quick a pitch.”
Related
It was quality fast bowling, from a formidably-built quick bowler doing the basics well, although he did have the advantage of coming out of a dirty sheet of a sightscreen that presumably used to be used as winter cover for one of Shanty Jack’s cargo boats in Watchet harbour. A sea shanty about the day the Overtons came up against each other would be a suitable response.
There was to be no let up in hostilities when Craig emerged, a touch grouchily, for a second time. Jamie welcomed him with another short ball, by now such an ingrained response that one half expected him to follow up with a shout of “that’s for stealing my colouring book”, but it was Gus Atkinson who dismissed him, for 29, lbw to an inswinger. It had been a frenetic innings from the moment that he was struck on his left hand by Dan Worrall as he fended off another short ball. There was decent pace in this Taunton pitch and Surrey made the most of it as they dismissed Somerset for 180.
Taunton has witnessed such hostility from Jamie before, but never as consistently as Somerset would have wished. Too often his performances were cumbersome or he was afflicted by another injury setback. Surrey’s bowling coach, Azhar Mahmood, appears to have brought positive benefits. Perhaps a change of scene has also helped. His run was a little shorter, his rhythm excellent and he looked every inch a fast bowler. He had also dismissed Steve Davies and Lewis Gregory in successive overs after lunch, Davies undone by a delivery that reared shoulder high from just short of a length.

He welcomes brother Craig back with a sharp bouncer after retiring hurt!

The Overton twins are 28 now, the time when they should be approaching their peak, but since they both briefly appeared in the same England squad seven years ago it is Craig’s career that has kicked on most. He came into this match with 402 first-class wickets, exactly double Jamie’s tally, and his bowling average is substantially lower – 30.53 compared to 23.11. He also has eight Test caps while Jamie can only believe that better times still lie ahead. But Jamie will always recall the day he felled his brother at Taunton and will quietly be relieved that he emerged unscathed.
That Craig top-scored with 29 encapsulated Somerset’s batting woes. The one-match absence of Matt Renshaw, who has been called up by Australia A, exposed their lack of options at the top of the order, and the absence of James Hildreth, who was reportedly ill, placed further pressure on a young batting order that remains much more at home in T20 than in red-ball cricket.
Ben Green has the feel of a sticking-plaster opener and he fell at second slip, driving at an outswinger; Tom Lammonby, capable of brilliance in T20, played around his front pad to fall lbw to Worrall; Tom Abell cut to point. Lewis Goldsworthy did try to dig in, labouring 85 balls for his 21, his end coming against an outswinger, held by Ryan Patel at third slip at the second attempt.
Most disappointing, though, is the form of Tom Banton, whose lack of method in the four-day game is in danger of becoming a fungal infection weakening his T20 self-belief. For Banton, one of the most destructive batters in the country, to be bowled by Atkinson’s inswinger, playing no shot, summed up his self-doubts. His search for betterment is admirable, but it might be that he needs to bat at No. 5 with adventure, as Peter Trego did before him.
The same has been observed of Jos Buttler’s failures to translate his T20 brilliance into Test cricket; indeed, Somerset appear to have a production line of players whose emotional connection appears to be with cricket’s fastest format. They must get the harvest in quickly around here.
Tags: County Championship Division One, Craig Overton, Daniel Worrall, Gus Atkinson, Jamie Overton, Somerset, Somerset vs Surrey, Surrey