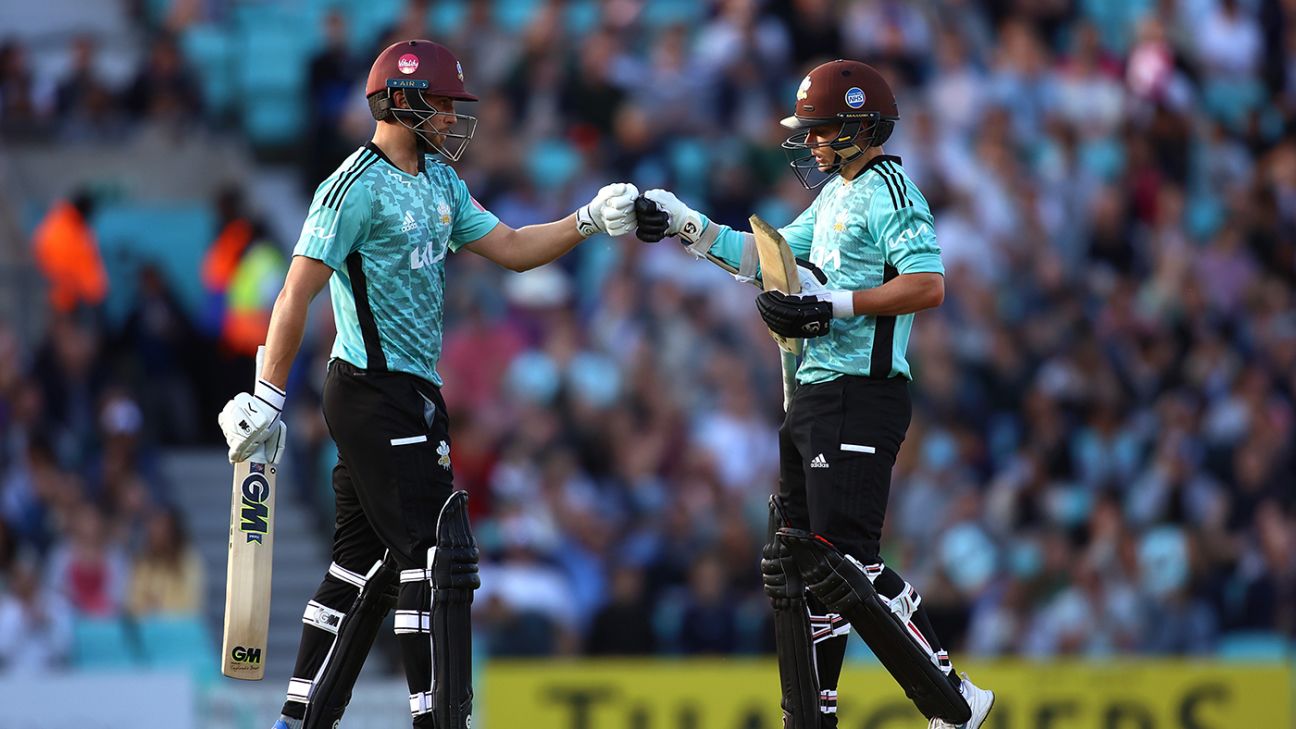 Surrey 228 for 4 (Curran 69, Jacks 64, Narine 52) beat Hampshire Hawks 156 (Curran 5-30) by 72 runs
Sam Curran produced an outstanding performance with bat and ball as Surrey thrashed Hampshire by 72 runs to move to the top of the South Group and maintain their 100 per cent record in this year’s Vitality Blast.
The 23-year-old made 69 off 38 balls as Surrey piled up 228 for four – their second-highest total in T20 history – before taking a career-best five for 30 including three wickets in an over as Hampshire were dismissed for 156.
A Kia Oval crowd of 15,000 was treated to some spectacular hitting, first by Curran and Will Jacks, who hammered 131 from 73 balls for the second wicket, and then by Sunil Narine, who added 52 from 23 deliveries.
It was Surrey’s highest total at The Kia Oval for seven years and too much for a Hampshire side hampered by the absence of their best batsman James Vince through illness. James Fuller top-scored with 43 in their reply but they remain winless after four games.
Yet it started well for them. After electing to bowl first they made a breakthrough in the first over when Liam Dawson spun one through Jason Roy’s defences.
But Jacks and Curran were soon flaying their attack to all parts. Between them, they hit ten sixes and nine fours in a partnership that was Surrey’s third-highest in T20 and eclipsed their previous best against Hampshire when Jacks and Laurie Evans put on 118 at the Ageas Bowl two years ago.
Jack hit 64 off 36 balls with five sixes – his second fifty in this season’s competition – and Curran also cleared the rope five times, including successive blows off Mason Crane to take him to his fifty. Crane’s three overs of leg spin disappeared for 58 runs.
Dawson briefly dragged things back by dismissing both batsmen in the 13th over. Jacks was brilliantly caught by the diving Crane at wide mid-off before Crane took a far easier catch in the covers to dismiss Curran for 69 off 38 deliveries.
But Hampshire’s suffering was far from over. Narine showcased spectacular timing and power to smash 52 from just 23 balls with five fours and four sixes and their reply began badly with Nick Gubbins acrobatically caught in the covers by Kieron Pollard off Reece Topley’s second ball.
Ben McDermott and Tom Prest briefly raised Hampshire hopes by adding 54 off 23 balls with McDermott depositing a delivery from Topley onto the Harleyford Road before Curran produced his decisive burst, bowling Prest as he swung across the line, deceiving McDermott with a slower ball which the Australian chipped to mid-on and having Donald taken at mid-off off a top-edge.
Curran then returned to bowl Nathan Ellis and pin Fuller lbw to complete an impressive night’s work.
Tags: Hampshire, Sam Curran, Sunil Narine, Surrey, Surrey vs Hampshire, Vitality Blast, Will Jacks