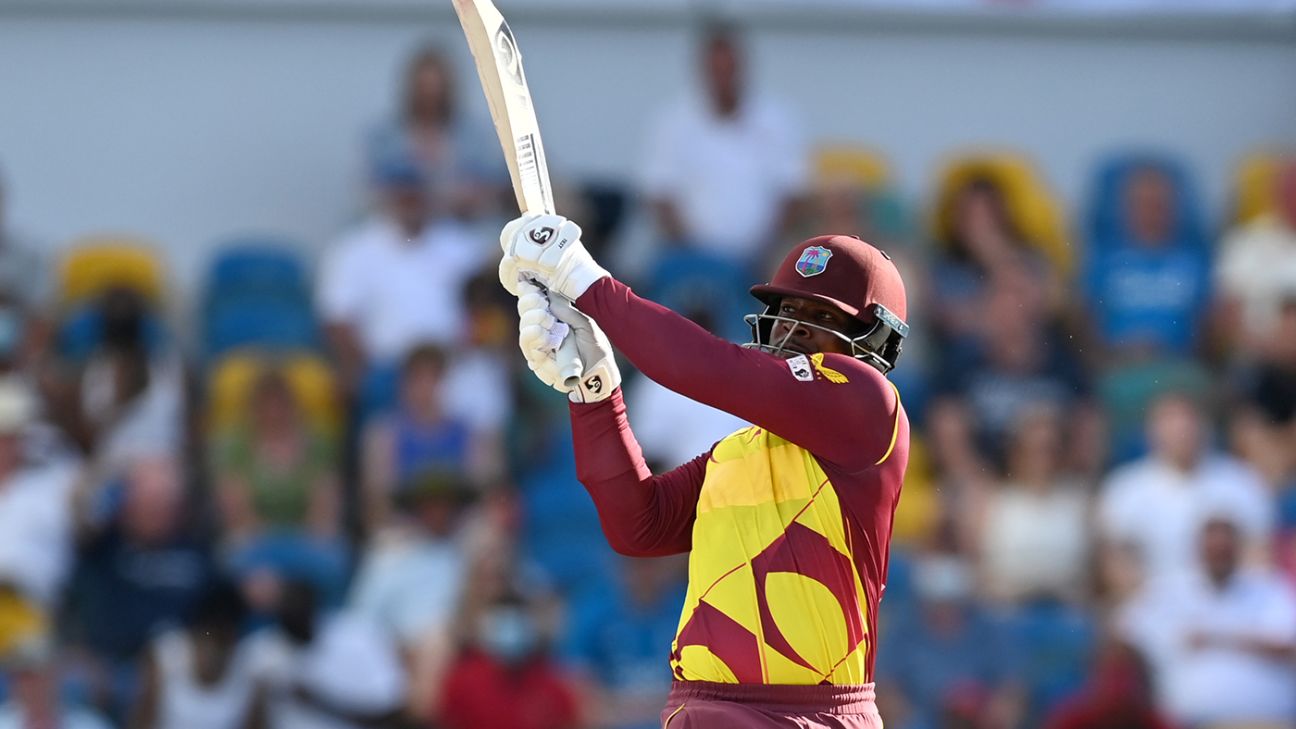 West Indies 308 for 5 (Mayers 120, Brooks 101*) beat Netherlands 288 (O’Dowd 89, Vikramjit 54, Lewis 3-67) by 20 runs
Maiden ODI hundreds from Kyle Mayers and Shamarh Brooks along with crucial strikes from Hayden Walsh and Akeal Hosein helped West Indies complete a 3-0 whitewash of Netherlands at Amstelveen in the final ODI. This was despite a strong reply from Netherlands, who were in the chase of 309 for about 40 overs, thanks to half-centuries from Vikramjit Singh and Max O’Dowd.
Netherlands began slowly but Vikramjit took on Mayers in the seventh over and found boundaries more often subsequently. He was dropped on 33 by Brooks in the 10th over and helped himself to three more fours. But Mayers had the last laugh, having Vikramjit play one onto the stumps right after the drinks break, for 54.
Musa Ahmed then took over the scoring to allow O’Dowd, who looked to play through, to consolidate. The first ten overs of their partnership had only three fours but they rotated the strike well to keep the run rate over five.
Though Bas de Leede’s 24-ball 25 allowed O’Dowd to play himself in despite slowing down a touch, the asking rate for Netherlands had climbed over six. After Walsh got the better of Musa in the 30th over, de Leede and O’Dowd ensured that the hosts kept the asking rate under eight till the 37th over. Hosein then bowled a wicket-maiden, dismissing de Leede, which shot the required rate up from 7.92 to 8.58.
Max O’Dowd anchored the innings but fell eleven short of a century•Peter Della Penna
Despite the downturn at the other end, O’Dowd took the game deep. He was unfazed by a couple of economical overs and found a boundary an over from the 41st to the 43rd, when he chopped on off Hosein.
West Indies then managed to get three boundary-free overs while picking up Scott Edwards and Teja Nidamanuru. Pieter Seelaar scored back-to-back fours towards the end but with 60 needed off the last five, the demands were too high.
Shermon Lewis then knocked off Seelaar and the tailenders in his and the game’s last over to earn himself a 3 for 67, after being expensive.
Earlier in the day, Mayers laid the platform for West Indies with the bat, sharing a 58-run opening stand with Shai Hope, followed by a mammoth 184-run partnership with Brooks.
Brooks and Mayers struck 11 sixes between them. A fair chunk (61%) of Mayers’ 120 came in boundaries. He got a reprieve when Vikramjit dropped him before he got off the mark and matched-up well against Vivian Kingma, against whom he got four of his seven sixes.
Brooks balanced his innings with good strike rotation and dispatched the loose balls. Their platform, however, was not capitalised on as West Indies made only 67 in their last ten.
That was thanks to Ryan Klein, who conceded 19 in the three overs he bowled in that period, picking up Mayers in the process. However, that loss of momentum was not to affect the tourists, who eventually sealed a 20-run win.
Tags: Kyle Mayers, Netherlands, Netherlands vs West Indies, Shamarh Brooks, West Indies, West Indies in Netherlands, World Cup Super League