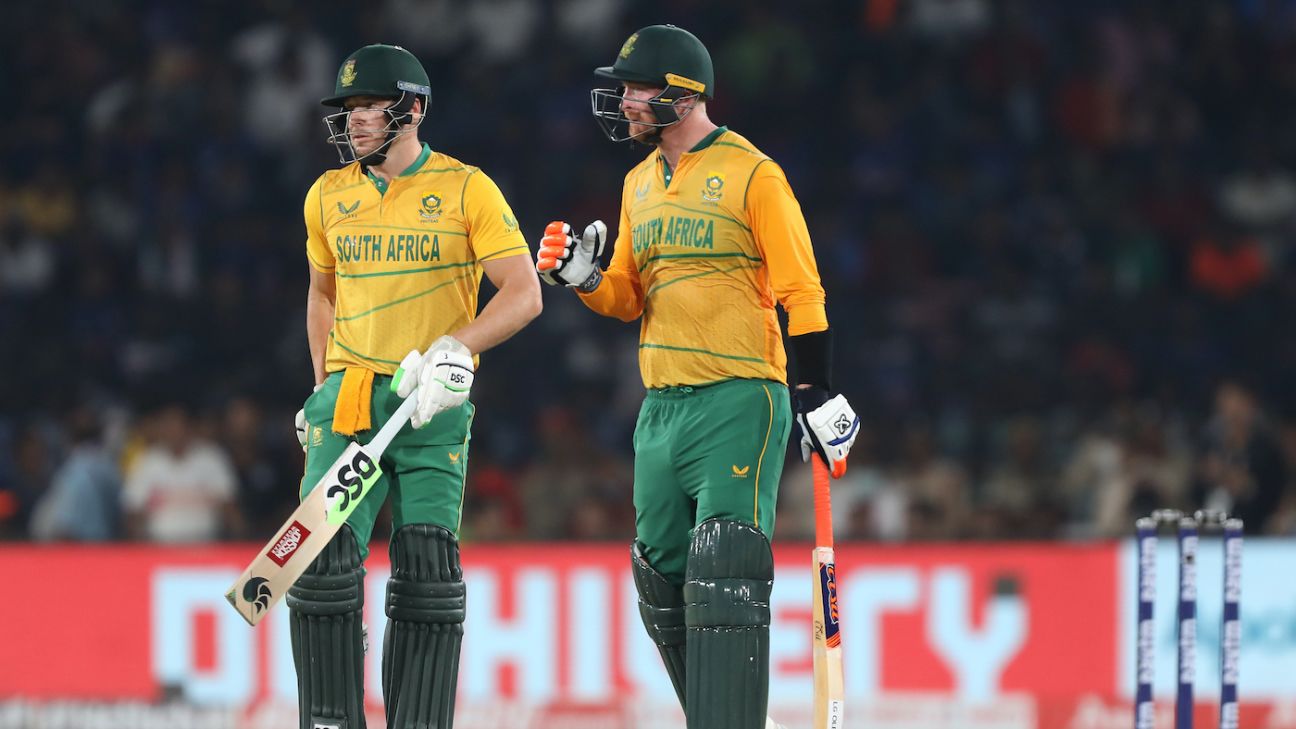 South Africa could finish what they travelled to India for – to win the five-T20I series – in less than a week if they win the third game on Tuesday, with two matches left to play. Conversely, it’s put India in a situation where every match is a must-win. That makes the Visakhapatnam game the most interesting so far, as this is where the series could turn.
For it to start to angle towards India, they will have to find a way to be more threatening, especially with the ball. Apart from one exceptional performance, Bhuvneshwar Kumar’s 4 for 13 in the second T20I, every bowler in India’s attack has been inconsistent at stages with South Africa appearing to have worked out a way to score off all of them. And they seem to have figured out how to do it under pressure.
Related
Historically known for having a middle-order that crumbled when the heat was on, South Africa have found ways to win matches even when it looked like they were pinned down. They have racked up 13 victories in their last 14 T20Is, including all seven of the ones in which they have chased.
Importantly, they have found runs from a variety of players and have not had to rely solely on the biggest name, Quinton de Kock, to post big scores. de Kock is in the squad but sustained what captain Temba Bavuma described as a “freak” hand injury two days before the second match and his availability for the rest of the series is unknown. That may give India one less thing to worry about but they will know they can’t take the South African side – superstars or not – lightly.

Rishabh Pant’s first foray into international captaincy is throwing up some interesting questions for him after a tough IPL. He has not scored a white-ball half-century since India’s series against West Indies in February and also has to deal with the additional challenges of managing the team’s strategy on the field. Depending on how he handles the rest of the series, with India facing three crucial matches, Pant may establish himself as third in the leadership pecking order, behind Rohit Sharma and KL Rahul, or a case could be made for Hardik Pandya – who led Gujarat Titans to victory in the IPL – to step into the role.
It was Rassie van der Dussen in the first match and Heinrich Klaasen in the second, so it’s only natural to wonder who will emerge as South Africa’s batting hero in the third. Reeza Hendricks has reason to impress: he has fallen behind the pecking order and will likely make way once de Kock returns. Temba Bavuma played a good anchoring role in Cuttack but his strike rate remains just above 120. Dwaine Pretorius could get another opportunity to show what he can do in a pinch-hitting No.3 role and David Miller, who has been a strong supporting actor so far and is in the form of his career, could make more headlines.
3:41

Steyn: It looked like Klaasen batted on a different pitch

Deepak Hooda could displace Shreyas Iyer to bolster the batting stocks and provide India with an offspin option, which could prove handy against the South African left-handers (read: David Miller). Whatever they do, India have to find a way to keep South Africa’s middle-order quiet, which may force their hand to play one of Umran Malik or Arshdeep Singh in this crucial match. Avesh Khan could find himself on the sidelines if that happens.
India: (possible) 1 Ishan Kishan, 2 Ruturaj Gaikwad, 3 Deepak Hooda/Shreyas Iyer, 4 Rishabh Pant (capt, wk), 5 Hardik Pandya, 6 Dinesh Karthik, 7 Axar Patel, 8 Harshal Patel, 9 Avesh Khan, 10 Bhuvneshwar Kumar, 11 Yuzvendra Chahal
Aiden Markram remains unavailable as he completes his quarantine after testing positive for Covid-19 on June 9 and if de Kock needs more time to recover from his wrist niggle, South Africa could go in with an unchanged batting line-up. de Kock underwent a scan on Monday, with results expected on match day when a decision on his inclusion will be made. The spinners have been under-utilised so far and one of them may be benched in favour of an extra quick.
South Africa: (possible) 1 Reeza Hendricks, 2 Temba Bavuma (capt), 3 Rassie van der Dussen, 4 David Miller, 5 Heinrich Klaasen (wk), 6 Dwaine Pretorius, 7 Wayne Parnell, 8 Kagiso Rabada, 9 Lungi Ngidi/Keshav Maharaj, 10 Anrich Nortje, 11 Tabraiz Shamsi

There is a small sample size of only two T20Is at this venue to tell us what we can expect from the surface. Both were low-scoring encounters, won by the chasing team. In 2016, India bowled Sri Lanka out for 82 and chased it down inside 14 overs, and in 2019, India were restricted to 126 for 7 by Australia, who won by three wickets. Both spinners and seamers were successful here, which suggests another tricky batting track. There’s rain around on the eve of the match but only a 20% chance on match day, with temperatures in the 30s and high humidity expected again.
2:38

“That depth is something we’re always trying to build. A freak injury with Quinny (de Kock) and his hand, and Klaasen took that opportunity with both hands. He’s a big player for us in the middle of the innings. We know what he can do. We back him 100%. We have a lot of belief in him, and he showed again why he’s a part of this team.”
Although Heinrich Klaasen was dropped from the ODIs and lost his national contract, Temba Bavuma backs him to do big things for South Africa
Tags: Aiden Markram, David Miller, India, India vs South Africa, Quinton de Kock, Rishabh Pant, South Africa, South Africa in India