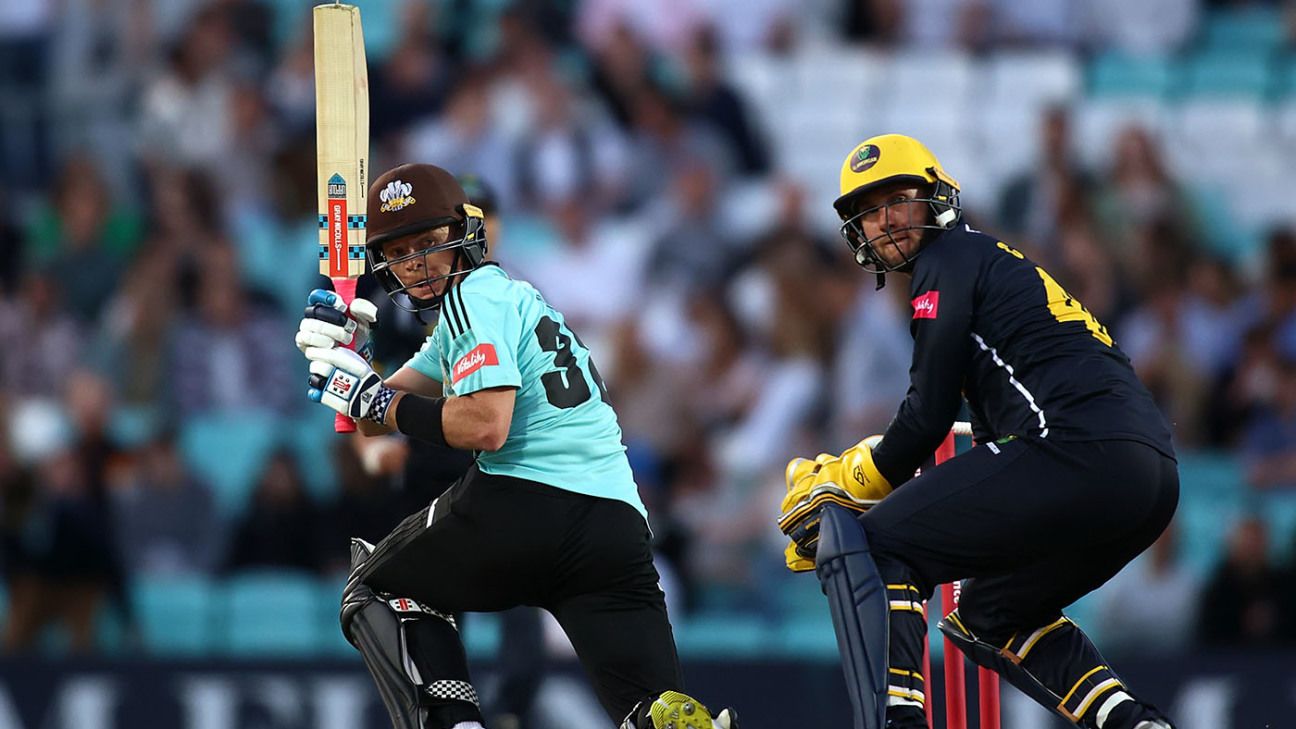 Surrey 174 for 6 (Pope 62, Hogan 5-18) beat Glamorgan 173 for 5 (Northeast 65, Cooke 46) by four wickets
Ollie Pope scored 62 from 46 balls as Surrey began their Vitality Blast campaign in thrilling style by beating Glamorgan by four wickets with one ball to spare in front of a 16,000 crowd at the Kia Oval.
Pope was joined by Sam Curran in a fourth-wicket stand of 62 and Surrey got home at 174 for 6 despite a late flurry of wickets as Michael Hogan almost pulled the game out of the hat for Glamorgan, who had earlier totalled 173 for 5.
England Test batsman Pope paced his knock superbly and, with the win all but assured, completed his fifty with two outrageous reverse-flipped fours to fine third man off Dan Douthwaite’s fast medium, before flat-batting another four through mid-off from the next ball.
Pope hit eight fours but when he and Jordan Clark, who thumped a useful 17, both skied catches in an extraordinary penultimate over from Hogan that also cost only one run it suddenly looked possible for Surrey to mess up. Hogan’s 5 for 18 was a Glamorgan T20 record against Surrey.
But Jamie Overton and Chris Jordan, now captaining Surrey in T20 cricket on his return from Sussex, held their nerve. With eight required from Michael Neser’s final over, Overton pulled and drove twos from the first and fifth balls, Jordan also sprinted back for a second run in between two singles and Surrey were home.
Sam Northeast’s 65 from 51 balls had anchored Glamorgan’s innings, and he hit Reece Topley for successive sixes in a 19th over costing 24 runs. Those were Northeast’s last two scoring shots, as he miscued the next ball to long-on where Jason Roy ran in and tumbled forward to take the catch.
But it was Chris Cooke who provided the real impetus in his belligerent 27-ball 46 in the second half of the innings, with West Indian mystery spinner Sunil Narine the stand-out bowler with 1 for 17 from his four overs on his Surrey debut.
Surrey lost openers Jason Roy, for 15, and Will Jacks, for 6, in the third over of their reply. Roy skied Hogan to cover in his first county appearance of the season and when Jacks also fell miscuing Surrey were 23 for 2. But Laurie Evans, badly dropped on four at midwicket by David Lloyd off Neser, played some powerful shots in his 23 and when he was caught off Douthwaite in the ninth over the Surrey chase had already gathered momentum.
Curran hit left arm spinner Prem Sisodya for a straight six, a pulled four and then a sweetly swung six over midwicket from consecutive balls in the 13th over and when he skied Hogan to deep square leg to go for 36 it was left to Clark to help Pope steer Surrey close to the winning line.
Glamorgan, put in, reached 67 for 2 at the halfway stage of their innings, with Northeast and Marnus Labuschagne doing their best to accelerate the scoring against some excellent bowling from Surrey’s strong and varied attack.
Northeast took successive lofted fours off Topley’s second over with the new ball, first down the ground and then whipped towards wide long-on, but Lloyd went for 3 in the fourth over – hitting Dan Worrall’s first ball straight to deep cover on the ropes.
Labuschagne’s 20 ended at the start of the seventh over when he uppercut Overton’s first ball to third man, where Topley judged the catch well. And Topley, at short fine leg, then produced a brilliant leaping effort to remove Kiran Carlson for 9 as he tried to paddle-sweep the impressive Narine in the 12th over.
Northeast had earlier unveiled an extraordinary tennis-style pull-hook for four in Overton’s second over and the same bowler conceded 20 when he returned for the 14th over of the innings and Chris Cooke slashed and swung him for two big sixes.
Cooke and Northeast added 63 for the fourth wicket, before Cooke top-edged a hook at Curran to long leg in the 18th over. Douthwaite pulled his first ball, from Topley, for six and both he and Joe Cooke, who slashed Jordan away through the vacant slip area for two fours in the final over, finished on 10 not out.
Tags: Glamorgan, Glamorgan vs Surrey, Michael Hogan, Ollie Pope, Surrey, Vitality Blast