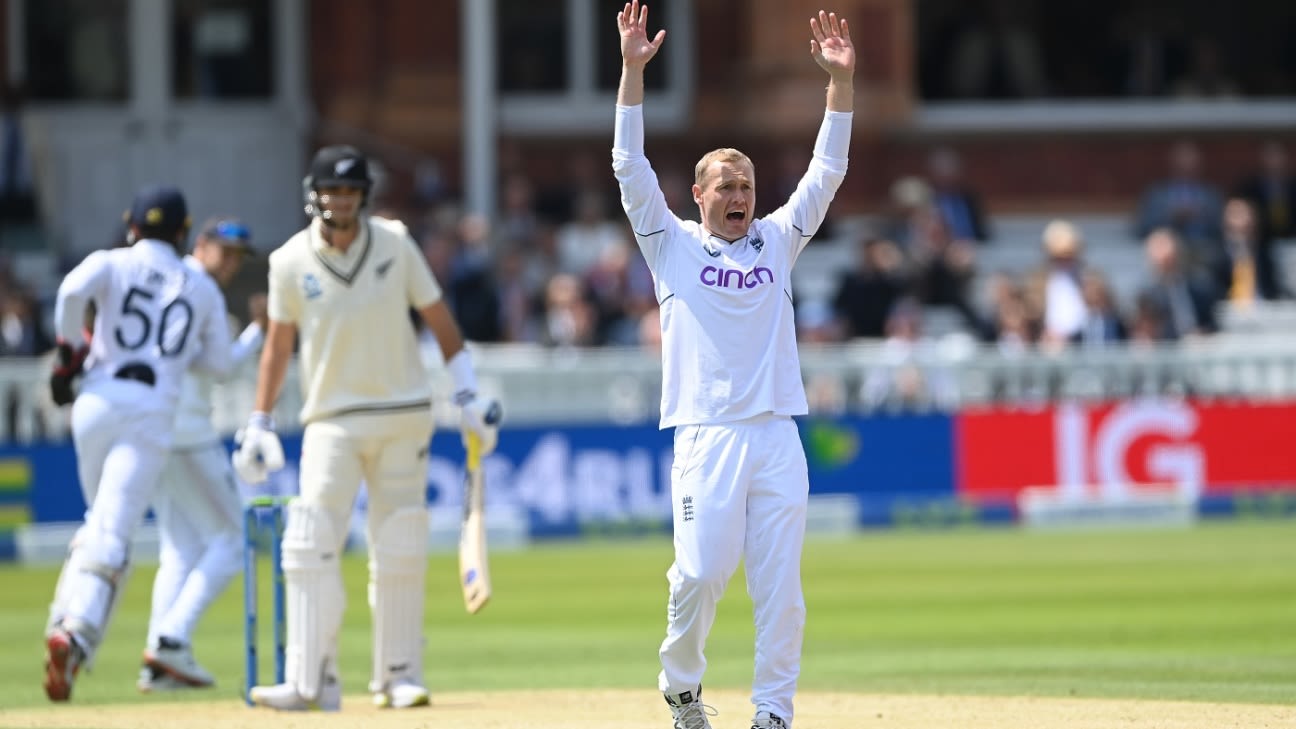 Matt Parkinson has been retained in England’s 14-man squad for the second Test against New Zealand, starting at Trent Bridge on Friday, with Jack Leach a doubt after suffering a concussion in the first session of the first Test at Lord’s.
Parkinson took 1 for 47 from his 15.3 overs in New Zealand’s second innings after driving down to London from Manchester at short notice on Thursday as a concussion replacement for Leach, who had landed awkwardly while diving over the boundary rope in the sixth over of the match.
Leach stayed with the squad at Lord’s this week but is not expected to return to training before Thursday – the day before the second Test – in line with the ECB’s return-to-play guidelines after concussions. He has suffered concussion at least twice before in his professional career and is a major doubt, though he has been included in the squad.
As a result, Parkinson has been added to an otherwise-unchanged squad, which sees Harry Brook and Craig Overton retained after missing out on selection in the first Test.
Related
Parkinson’s figures were unremarkable at Lord’s but his contribution was underlined by Ajaz Patel’s match return of 0 for 22 from two overs in conditions that were not conducive to spin bowling. Parkinson did not bowl a maiden but conceded a respectable 3.03 runs per over and had Tim Southee caught at slip with a trademark full, flighted legbreak.
“The way that Parky’s Test career has gone, following the team round every tour and not getting an opportunity, that pretty much sums up how he was going to get his chance: Leachy gets concussion and he finds himself driving down to play,” Ben Stokes, England’s captain, said. “But when it came to bringing Parky on, his role as the legspinner is to come on and change the game, not to hold the game.
“I said, ‘just get the field that you’re comfortable with and look to take wickets with every ball that you bowl’. Yesterday, bringing him on at the end was because I just felt that Tim [Southee] hits quick bowling really well and that’s Parky’s niche: he knows how to bowl at people when they’re trying to come hard, because of his T20 bowling.
“It was just a great opportunity to get him into the game and it was good to see him get his first Test wicket as well. He’s a really popular guy among the group. He’s been on a lot of tours with us, we all know him really well, and everybody was very excited to see him play – albeit in unfortunate circumstances.”
The ECB said on Monday that Brook and Parkinson would both be made available for T20 fixtures at the start of the week: Brook for Yorkshire against Nottinghamshire on Monday night, Parkinson for Lancashire against Leicestershire on Tuesday.
England squad for second Test: Alex Lees, Zak Crawley, Ollie Pope, Joe Root, Jonny Bairstow, Ben Stokes (capt), Ben Foakes (wk), Matthew Potts, Stuart Broad, James Anderson, Jack Leach, Matt Parkinson, Craig Overton, Harry Brook
Tags: England, England vs New Zealand, ICC World Test Championship, Jack Leach, Matt Parkinson, New Zealand, New Zealand in England