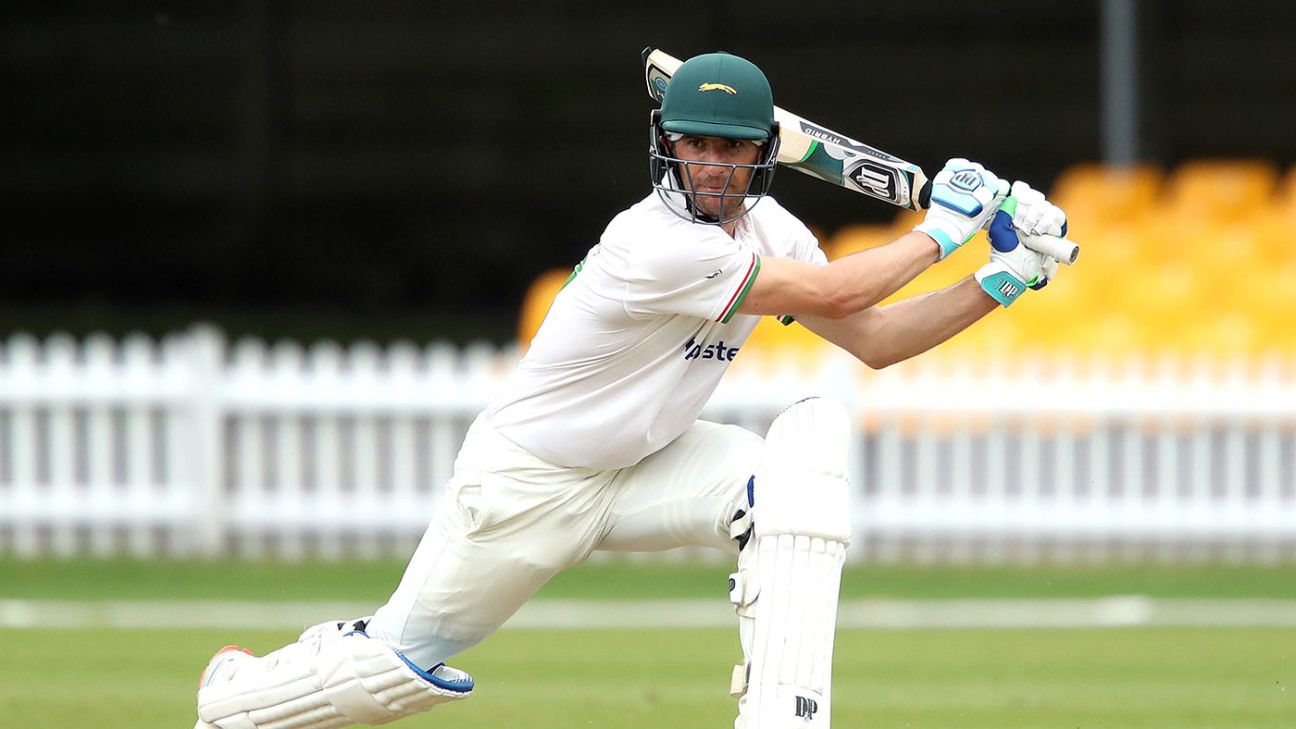 Leicestershire (Ackermann 116, Hill 104, Patterson-White 3-37) vs Nottinghamshire
Centuries by Lewis Hill and Colin Ackermann enabled winless Leicestershire to enjoy their most productive opening day of the season so far as they returned to LV= County Championship action at the Uptonsteel County Ground.
Despite being asked to bat first on a well-grassed pitch, the Foxes closed on 340 for 8 against Division Two promotion favourites Nottinghamshire, who came into the match-up with their East Midlands neighbours looking for a fifth win of the campaign.
Hill – only the second Leicestershire batter to reach three figures this summer – made 104, sharing a stand of 141 for the third wicket with Ackermann, who became the third as his 116 guided his side to their highest total of the campaign. It is only the second time the Foxes have picked up three batting bonus points.
Nottinghamshire claimed four wickets in the final session, but it was not the day they would have anticipated when skipper Steven Mullaney won the toss and opted to give his bowlers first use of a surface that had good pace and carry and gave the ball a chance for much of the day.
Related
James Pattinson, back on the ground where he took a match-winning 5 for 29 on his Nottinghamshire debut in 2017, was celebrating after only his fourth delivery as Hassan Azad edged to third slip.
Pattinson, who went close several more times, should have had a second, Rishi Patel surviving on 15 when wicketkeeper Tom Moores palmed away what was probably a chance for first slip. Patel was caught at first slip as Dane Paterson struck in his second over at first change but Hill and Ackermann wasted few opportunities as Nottinghamshire bowlers stuck to their attacking tactics, putting on 66 in almost 15 overs at the break to be 129 for 2.
The afternoon followed a similar pattern, at least until the captain, Mullaney, decided deep into the session that his frontline bowlers were beginning to toil and allowed himself a bowl. That brought a breakthrough as Hill’s fine innings ended after 15 fours, most of them cut or driven through the off side.
Lewis Hill latches on to cut•Getty Images
Mullaney, who had bowled only a couple of overs of his wobbly medium pace before lunch, took over from James at the Pavilion End, his fifth ball did just enough to pass the outside edge and clip Hill’s off stump. Tea arrived at 233 for 4 after Wiaan Mulder had thin-edged Pattinson to be caught behind.
Louis Kimber, thankfully unscathed after taking a blow on the helmet facing Pattinson just before the break, played nicely for 33 as he and Ackermann added 69 for the fifth wicket, Ackermann gathering nine boundaries before turning a leg-side delivery from Lyndon James into a couple of runs to complete his hundred, a first for the former skipper in more than a year.
Liam Patterson-White, the left-arm spinner, found some turn to bowl Kimber and Harry Swindells was quickly seen off by a swinging delivery from Brett Hutton after Nottinghamshire took the second new ball.
Ackermann departed in the third last over of the day, a tentative prod ending in the hands of slip as Patterson-White tried his luck at the Bennett End for the first time, the spinner adding another by the same route as Callum Parkinson fell to the last ball of the day.
Tags: Colin Ackermann, County Championship Division Two, Leicestershire, Leics vs Notts, Lewis Hill, Liam Patterson-White, Nottinghamshire