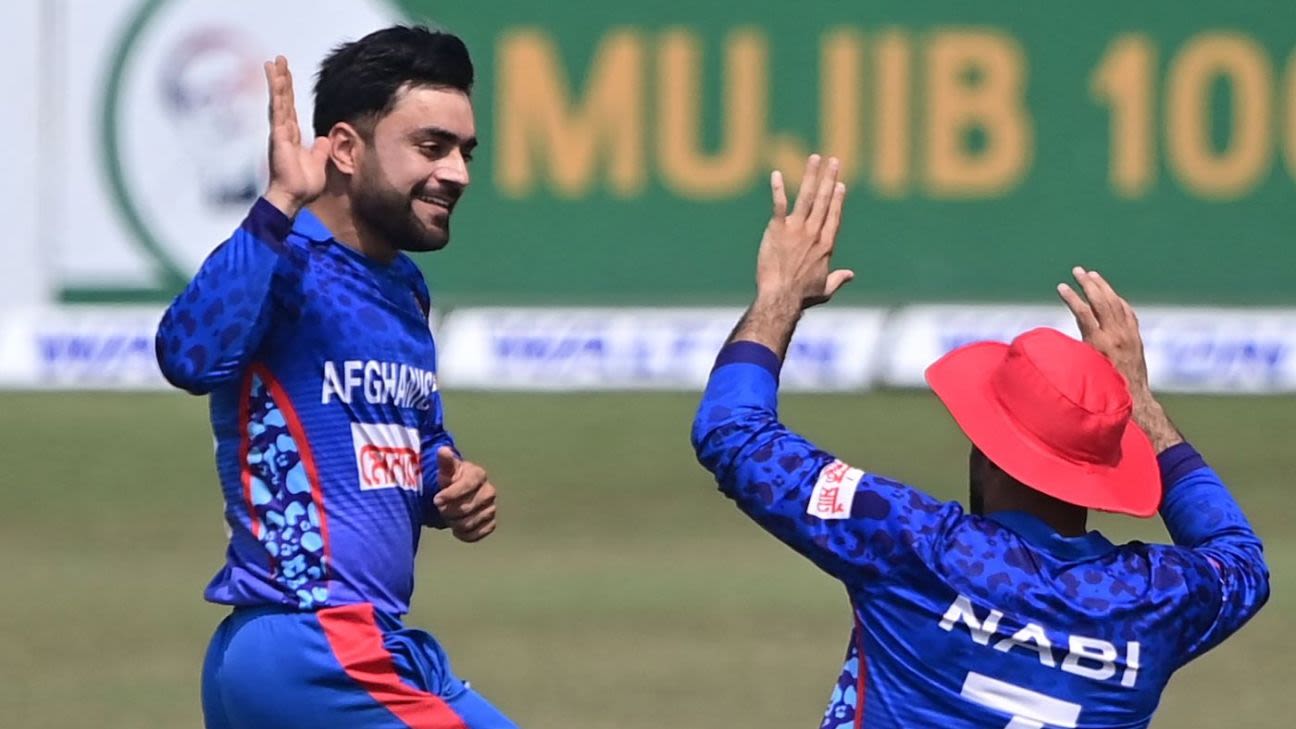 Afghanistan 137 for 6 (Shahidi 38, Nabi 34*, Muzarabani 2-18, Chatara 2-32) beat Zimbabwe 135 all out (Raza 38, Burl 21, Rashid 3-31, Nabi 2-21, Farooqi 2-25) by four wickets
A sterling show by the bowlers coupled with an excellent all-round effort from Mohammad Nabi helped Afghanistan win the third ODI by four wickets, sweep the series 3-0 and more importantly collect crucial Super League points in Harare. Afghanistan now have 100 points on the World Cup Super League table and are placed second, behind Bangladesh.
All six Afghanistan bowlers picked up at least a wicket as Zimbabwe, after being put into bat, folded for 135 in 44.5 overs. On a surface that had a bit in it for the bowlers, Afghanistan struck at regular intervals, never allowing any of the batters to settle.
In reply, the Zimbabwe bowlers, Blessing Muzarabani, in particular, came out all guns blazing but the target never went out of reach for the visitors. Hashmatullah Shahidi, the captain, and later Nabi, the former captain, kept a calm head as the visitors reached the target with 12.2 overs to spare.
Batting first, Zimbabwe found the going tough right from the start. Wessley Madhevere, in a bid to up the scoring having managed just 5 off 17 balls, tried to force a Fazalhaq Farooqi length delivery through the off side. But lack of foot movement meant he could only get an inside edge back onto his stumps. Craig Ervine then departed for 0 with Rashid Khan completing a sharp catch low to his right at covers. Innocent Kaia struck a couple of fours but was trapped right in front of the wicket off Mujeeb ur Rahman for 16 before Azmatullah Omarzai sent Dion Myers’ off stump cartwheeling.
Tottering at 42 for 4, the hosts needed someone to hold fort and Sikandar Raza did just that. He started sedately, while collecting a few boundaries whenever the opportunity arose. He had Regis Chakabva for company for a bit as the duo added 35 runs for the fifth wicket. But once Chakabva fell, lbw to Rashid, another collapse ensued. Raza, looking to increase the run-rate, fell for 38 and shortly after, the Zimbabwe innings folded with more than five overs to spare.
While Rashid was the pick of the bowlers for Afghanistan, returning 3 for 31 in his 7.5 overs, Nabi and Farooqi took two wickets each. Apart from Raza, Ryan Burl was the only batter to cross the score of 20.
With nothing to lose, Zimbabwe bowled with aggressive plans up top. Muzarabani was quick, accurate and hit the batters on several occasions. After collecting a solitary run at the end of three overs, Rahmanullah Gurbaz broke the rut, clattering Tendai Chatara for a six over cover. The bowler got his man two balls later, though, the opener caught at slip. Muzarabani then got into the act, first dismissing Ibrahim Zadran for 8 before catching Rahmat Shah’s outside edge for 17. Muzarabani bowled his 10 overs on the trot, finishing with impeccable figures of 2 for 18, which included three maidens.
However, once he was finished with his spell, Afghanistan found proceedings easier. Chatara did get rid of Najibullah Zadran but Shahidi kept his cool. He added 45 runs for the fifth wicket with Nabi before falling for 38. Omarzai’s wicket, with the score on 118 for 6 might have raised Zimbabwe’s hopes but Nabi, alongside Rashid took the visitors home with plenty to spare. He sealed the series and the clean sweep for Afghanistan with a solid pull of deep midwicket.
Rashid was named Player of the Match for his three wickets, while Rahmat was declared Player of the Series.
Tags: Afghanistan, Afghanistan in Zimbabwe, Mohammad Nabi, Rashid Khan, World Cup Super League, Zimbabwe, Zimbabwe vs Afghanistan