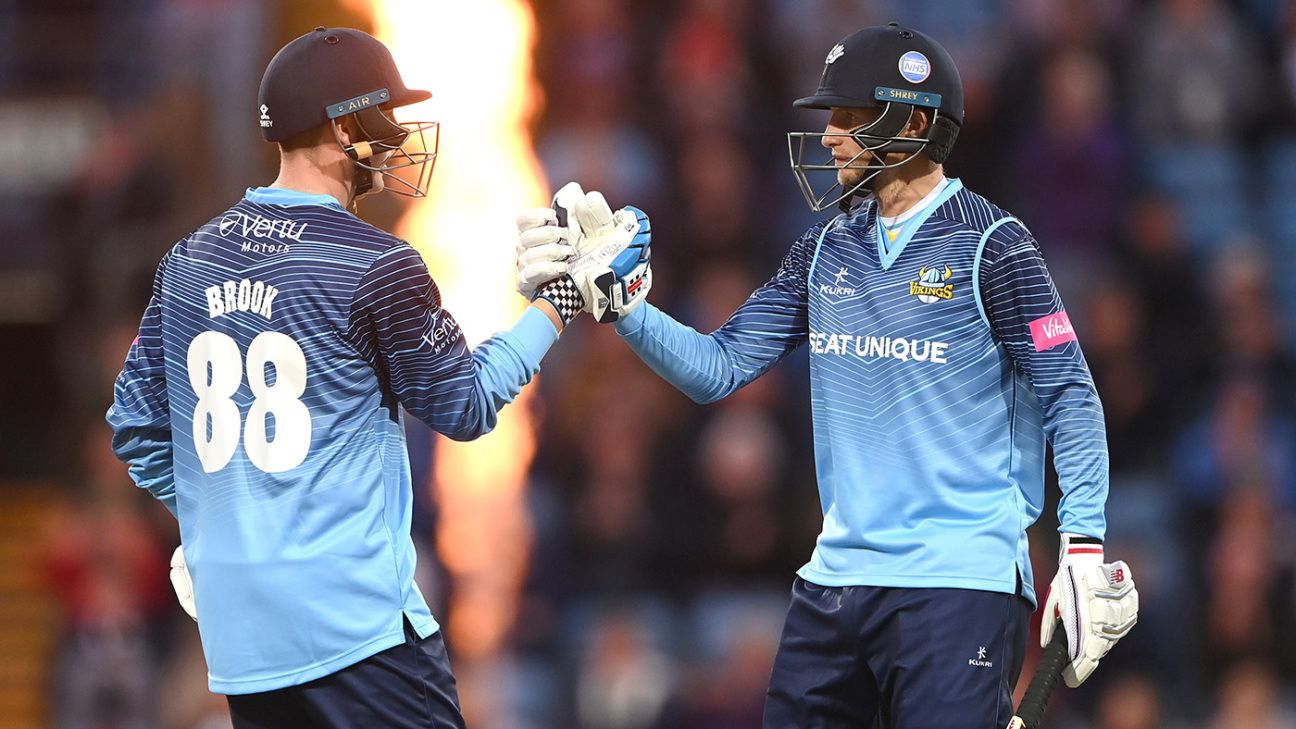 Yorkshire 175 for 3 (Brook 60*, Lyth 40, Root 35*, Malan 33) beat Worcestershire 172 for 9 (Haynes 61, D’Oliveira 32, Thompson 3-35) by seven wickets
Two trophyless appearances at Finals Day are the paltry sum of 20 years of T20 cricket for Yorkshire, as if somehow their illustrious history inhibits them in the shortest format of the game. You can imagine the ghost of Wilfred Rhodes emerging from behind the Howard Stand, whenever they set their minds free, chiding: “We don’t play this game for fun.” Perhaps this will be the year they put all that behind them, emerging from a troubled winter with a new outlook. A seven-wicket win with 11 balls to spare was a good way to start.
Harry Brook certainly is playing it for fun, the joy he is bestowing enough to soften an old ghost’s heart. Every time he comes out to bat this season, he is living a fantasy of unimagined success. He was in ridiculous form at Headingley, as he has been all summer, transferring his prodigious Championship season – 840 runs at 140 – to the start of the Blast. His unbeaten 60 took 27 deliveries, his array of shots expertly chosen, his domination apparent from the first ball he faced.
Related
Worcestershire, who at one time had visions of 200-plus, were hauled back within striking range at 172 for 9. At 88 for 3 from 10.5, despite solid contributions from Adam Lyth and Dawid Malan, the game was still in doubt, but Brook and Joe Root, who astutely batted in his shadow, added 87 in 7.2 overs.
Yorkshire were grateful to field a Blast XI as strong as this, even with the absence of Jonny Bairstow and David Willey on IPL duty. The presence of two England call-ups, Root and Brook, was just as it should be in the Blast, within reason; Shadab Khan was on debut; and, perhaps most hearteningly of all, Tom Kohler-Cadmore was making his first appearance of the season after a concussion suffered in pre-season.
It was watched by a moderate crowd – 6,000 at most – a somewhat worrying sign for the Blast as it seeks a successful existence alongside its mouthier (and cheaper) offspring, the Hundred. Yorkshire also have their own stumbling block: six home games out of the first seven, all packed into a fortnight, and this during a cost-of-living crisis, a staggeringly incompetent fixture list which should cause those responsible to squirm with embarrassment.
Jack Haynes hits inside-out over wide mid-off•PA Images/Getty
Worcestershire’s chief resistance came from Brett D’Oliveira and Jack Haynes, one-time teammates at Ombersley. On an excellent batting surface, they took 70 from the powerplay and were 123 for 3 in 12 overs by the time both had departed, but they subsided tamely, suffering for the absences of their overseas duo Colin Munro and Dwayne Bravo and their captain Moeen Ali. Haynes, a player of considerable promise, has logged his first three first-class hundreds in as many weeks this season and his buoyancy could enable him to float happily through the Blast group stages.
Worcestershire lost Ed Pollock early, hacking at Dom Bess, but they found momentum not just in the shape of Haynes, but also D’Oliveira. Twenty-two off the fifth over, Jordan Thompson’s first, beginning with a midwicket pull and ending with two straight hits, saw him immediately withdrawn from the attack. Root brought himself on for an over, but it was a captain’s gambit he regretted as Haynes twice deposited him over long-off in an over that cost 20. It was with relief that Root’s last ball saw the end of D’Oliveira as he drove his last ball to point (32 from 16).
There was work to do for Yorkshire and the middle overs were in the hands of the spin partnership that they hope will bring them sustenance this season, Adil Rashid and Shadab (the best spin combo at Headingley since Rashid and Azeem Rafiq, and as everybody knows there hangs a tale or two).
Shadab looked in trim, whereas Rashid began rustily, having had no meaningful cricket since the end of January in Bridgetown, and generally looked dissatisfied with his rhythm, but still somehow emerged with 0 for 30 from four. Yorkshire still hope he will relax his white-ball stance and play an occasional red-ball game and, on this evidence, it would benefit all parties.
With no wickets from either spinner, Worcestershire held the upper hand but they declined the moment that Haynes swung Matthew Revis to deep midwicket. Haynes and D’Oliveira had gone down the ground with ease, but what followed was largely a collection of nudges and half-hits. Revis’ only two previous T20 matches had been ones of supreme inactivity, but he has had a decent Championship season and the wicket of Haynes was a good way to start. Thompson, milked earlier, returned bullishly, with two late wickets.

This is absurd fielding from @HarisRauf14

With only one stump (and one bail) to aim at too!

There was also a scintillating run-out from Haris Rauf off his own bowling. Ed Barnard’s straight drive hit the stumps, but dislodged only one bail, leaving one bail still standing, and a run out still a possibility without recourse to all the palaver off pulling up a stump. Had Rauf spotted the intricacies of a law which seems particularly anachronistic in the heat of T20? Whatever, he dashed towards mid on and flung down the stumps at high velocity.
Kohler-Cadmore’s return was unrewarding as he chose to slog-sweep the first ball he faced from D’Oliveira, his fourth and was bowled. Lyth had set up the innings to good effect; Malan played a classic Malan computerised innings before casually holing out to the long side at deep midwicket with 33 from 30 and the game in the balance.
Brook and Root made light of that. Brook was particularly severe on Barnard and Pat Brown, who have outdone many a T20 batter in the past. A punch over wide long-off off Barnard and uppercut against Brown over backward point were among the highlights.
If Root had batted at No. 3 at Lord’s, of course, there would have been room for Brook to make his Test debut. Instead, with nine scores of fifty-plus to his name in 10 innings this season, he goes to Lord’s amid premature indications that he must await his opportunity. Not the sort of thing to chat to Root about in a match-winning T20 partnership – but certainly the sort of thing to mull over while you were watching it.
Tags: Harry Brook, Jack Haynes, Joe Root, Jordan Thompson, Vitality Blast, Worcestershire, WORCS vs Yorkshire, Yorkshire