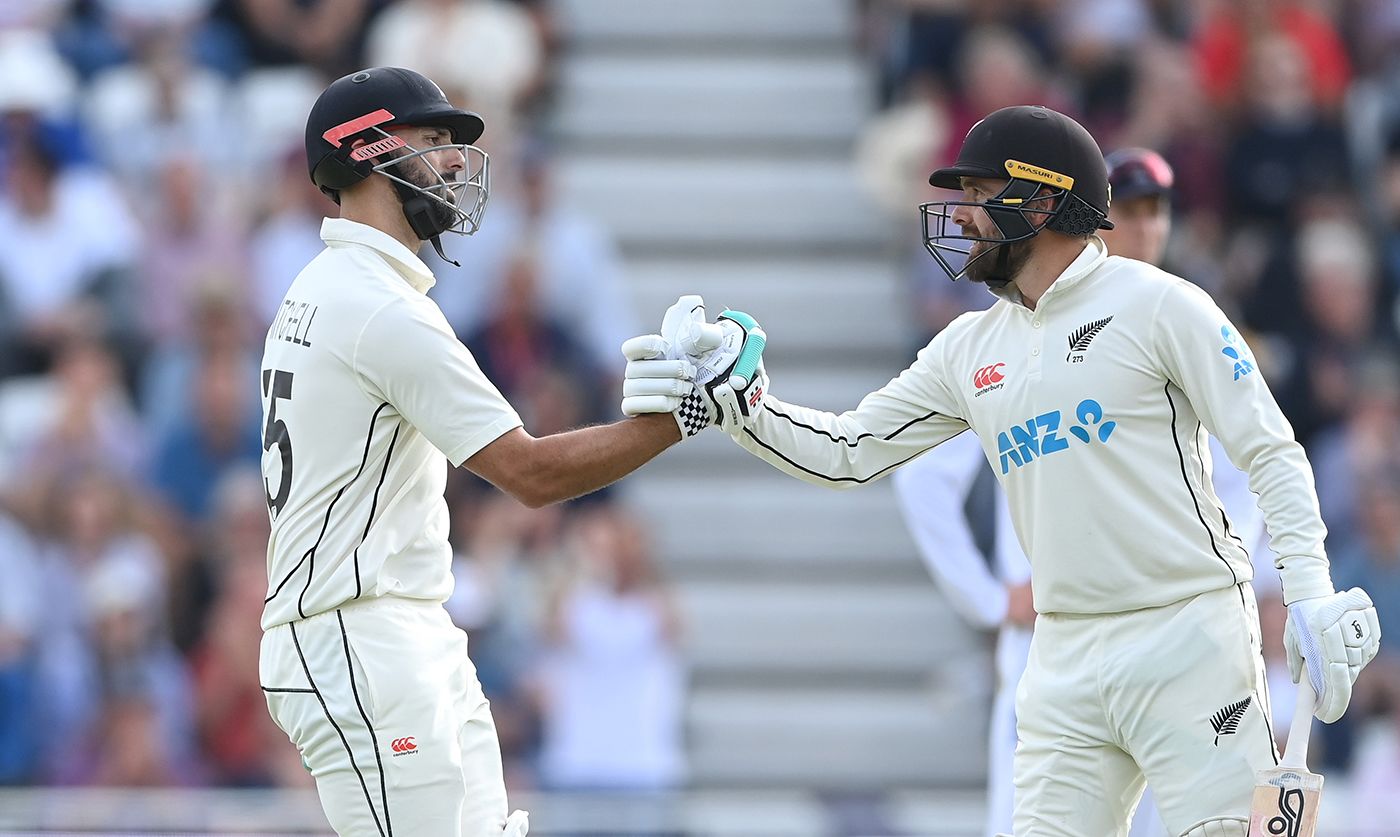 Stumps New Zealand 318 for 4 (Mitchell 81*, Blundell 67*) vs England
As far attempts to negate a swinging ball go, Daryl Mitchell’s display of long-range beer pong was inventive to say the least.
Assisted by the ale or otherwise, he and Tom Blundell managed to see out the latter stages of a tricky middle session for New Zealand then navigate their side to the close of an intriguing first day at Trent Bridge at 318 for 4.
The duo, who shared 195-run stand in the second innings of New Zealand’s five-wicket defeat at Lord’s last week had put on 149 by stumps in this second Test, Mitchell unbeaten on 81 and Blundell 67 not out.
During a morning session when the ball presented little movement through the air or off the seam but bounced appreciably from a good length, New Zealand openers Will Young and Tom Latham started brightly with an 84-run partnership before Ben Stokes and James Anderson struck with consecutive deliveries to remove both.
Those same two bowlers managed to get the ball talking after the lunch break, however, combining again to remove a fluid-looking Devon Conway and Henry Nicholls as all of New Zealand’s top-four made starts but none breached fifty.
Related
England, whose fielding in the first Test had been noticeably sharp, were left to rue missed chances which would have made the equation considerably worse for their visitors. Zak Crawley dived from second slip across Joe Root at first and managed only to parry Nicholls’ thick outside edge off Stuart Broad away from both of them. Nicholls was on 17 at the time.
Root then shelled a regulation slips chance off Mitchell, on 3, which wobbled ever so slightly as it came off the bat, and a tougher one off Blundell when he was on 2, Root thrusting his right hand out but failing to hold on.
Mitchell and Blundell resumed after tea on 20 and 7 respectively and, with Jack Leach continuing after bowling the penultimate over before the break, Mitchell plundered the England spinner down the ground for six, the ball landing in a spectators’ full pint cup.
Matthew Potts, clearly more disappointed than amused, indicated that the ball had been completely submerged as the umpire ran over with a towel and set about trying to dry it off. Sure enough, the ball didn’t do much for the bowlers after that until Potts managed to get it moving a little again on the evening breeze.
Blundell, on 39, survived England’s attempt to overturn a not-out lbw decision on umpire’s call off Leach and Mitchell top-edged another six off Broad over the keeper’s head.
England took the second new ball with about half an hour left in the day’s play and Broad was left cursing yet another missed opportunity when Blundell moved to 67 by edging him through the cordon where Crawley and Jonny Bairstow remained virtually motionless at second and third slip as the ball shot between them to the boundary rope.
Earlier, Stokes allayed concerns over his ability to bowl, raised when he showed some discomfort in his side while training on Wednesday, bringing himself on in the 19th over. He opened with a loose delivery outside off stump which Young punished to the boundary through point and which turned out to be the first of two front-foot no-balls for the over.
Leach followed Stokes into the attack, having recovered from the concussion he suffered while fielding on the opening day of the first Test at Lord’s, but it was Stokes who made the breakthrough in his second over.
Having conceded two more boundaries to Young on the drive, the second misfielded by Leach in the covers, Stokes bowled a tight off-stump line and got the ball to kick into the splice of Young’s bat with Crawley collecting a good catch low at second slip.
James Anderson laughs after his long-hop has Tom Latham caught at midwicket•AFP/Getty Images
Potts took a strong catch at midwicket to get rid of Latham, who slapped a short ball straight to him at pace as soon as Anderson returned to the attack and New Zealand had lost two wickets in as many balls, although cause for concern to England was the fact that they conceded 20 boundaries in the first session.
After lunch, Stokes accounted for Nicholls with a ball that nipped away off the seam, drawing a prod to wicketkeeper Ben Foakes and ending a 77-run stand with Conway.
Conway had produced some eye-catching drives and pulls en route to his score which included seven fours before he was undone by an excellent Anderson delivery that looked like shaping away before jagging back off the seam and finding a big inside edge through to Foakes.
Anderson thought he had Conway out for 41 when the batter picked out Potts at midwicket but a soft signal of not-out was upheld when third umpire Rod Tucker ruled that the ball had gone to ground.
After losing the toss, Latham – standing in as captain for Kane Williamson who tested positive for Covid-19 on the eve of the match – said he would have liked to bowl first on a green-tinged pitch which he said looked dry underneath, although he would no doubt have taken New Zealand’s score at the end of the day.
Willamson’s absence, and that of Colin de Grandhomme who injured his foot while bowling in the first Test and was ruled out of the series, forced two team changes for New Zealand, who also left out left-arm spinner Ajaz Patel. They brought in Nicholls, back from a calf injury followed by a bout of Covid, and added Matt Henry in a four-pronged seam attack, with Michael Bracewell, the left-handed batter who also provides an offspin option, making his Test debut.
Tags: Ben Stokes, Daryl Mitchell, England, England vs New Zealand, ICC World Test Championship, James Anderson, New Zealand, New Zealand in England, Tom Blundell, Tom Latham