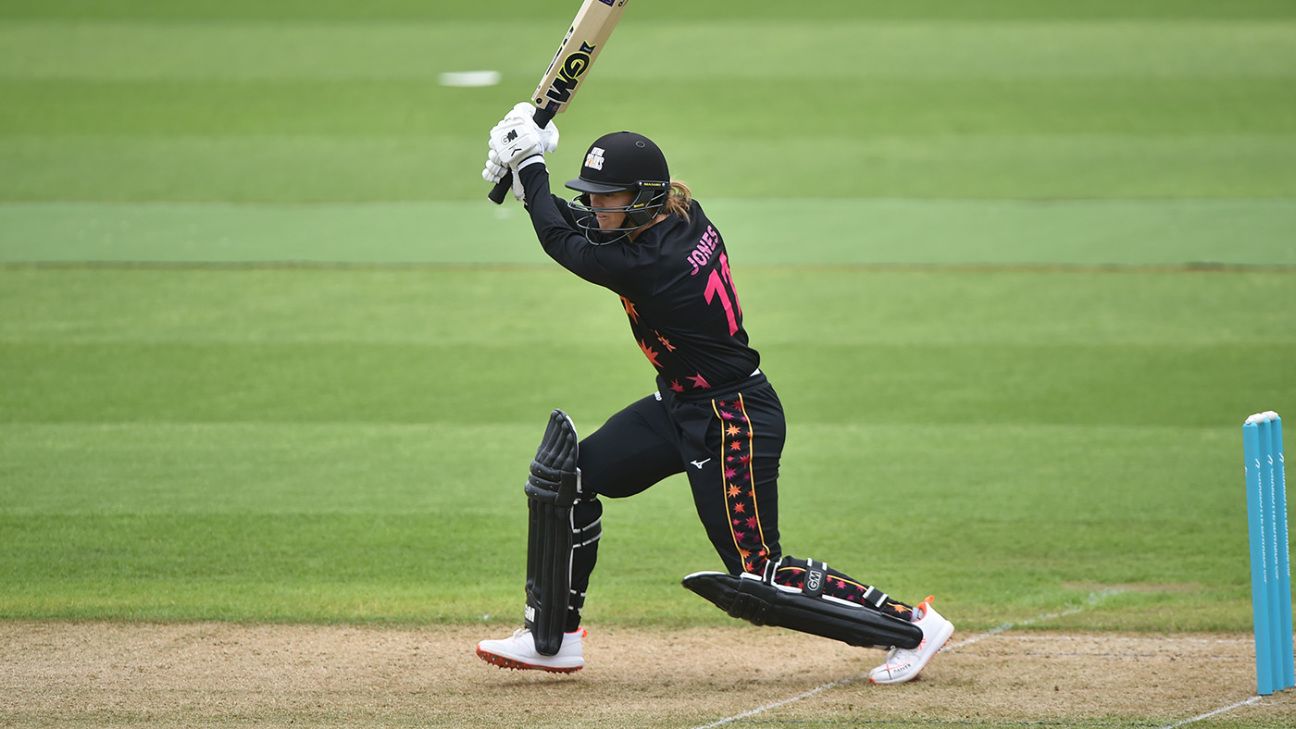 Central Sparks 146 for 5 (E Jones 69, Wong 35) beat Sunrisers 143 for 6 (Gardner 41, Carr 37*) by three runs
Central Sparks captain Eve Jones struck her first half-century of the season to lead her side to a thrilling three run victory over Sunrisers at Wantage Road and almost certainly book themselves a place at finals day.
Jones struck 69 from just 62 balls as she rediscovered the form which saw her voted PCA Player of the Year last season. She shared an opening stand worth 92 in 12 overs with Issy Wong as Sparks posted 145 for 5.
In reply Jo Gardner (41) and Amara Carr (37 not out) led a late spirited fightback with a partnership of 82 in nine overs, coming together after Sunrisers had stuttered to 55 for 5. They needed 14 from the final over, but when Gardner was caught in the deep attempting to clear the ropes, they fell just short.
The result cements Sparks’ spot at the top of the table ahead of Finals Day which is also being played at Northampton on June 11.
Related
Jones took Sparks past 50 at the end of the powerplay with a big six over long-on off Mady Villiers, one of two maximums in her innings along with six boundaries. As well as hitting aerially over the infield and punching commandingly through the covers, she also timed the ball beautifully and showed excellent placement.
She was dropped on 65 and offered a tough caught-and-bowled chance just before reaching her half-century but otherwise looked in fluent touch.
Wong began aggressively before being well caught by a diving Villiers off Scotland legspinner Abtaha Maqsood for 35. Grace Scrivens then accounted for Amy Jones when the England keeper edged an attempted cut behind. Abi Freeborn hit a run-a-ball 14 before she was caught off a lap-sweep off Sunrisers skipper Kelly Caste with the visitors on 124 for 3.
Eve Jones was starved of the strike towards the end of the innings and fell attempting to scoop Naomi Dattani off the first ball of the final over. Dattani then picked up a second wicket in two balls when she bowled Ami Campbell without scoring.
In reply, Sunrisers lost Villiers caught behind chasing one outside off stump off the opening over from Wong. Scrivens, though, looked fluent, driving sweetly through cover for a brace of fours off Liz Russell’s second over and pulling Wong for a big six behind square.
Sunrisers’ challenge seemed over when they lost four wickets for 16 in five overs. First, Scrivens holed out to deep midwicket off Russell on 27, then Kelly was squared up by Arlott and offered a simple catch off the leading edge. Mia Rogers was run out through some sharp work from Hannah Baker and Arlott. Dattani, who had ridden her luck, surviving two dropped catches, was trapped lbw by Baker for 17.
Carr and Gardner refused to give up the fight, taking Sunrisers to the brink of what would have been their first win of the season. Both showed plenty of intent from the start, Gardner freeing her arms against Baker in hitting her for three consecutive boundaries and later smoting her down the ground for six to leave Sunrisers needing 22 off the final two overs – but it was not to be.
Tags: Amara Carr, Central Sparks, Charlotte Edwards Cup, Eve Jones, Issy Wong, Joanne Gardner, Sparks vs Sunrisers, Sunrisers