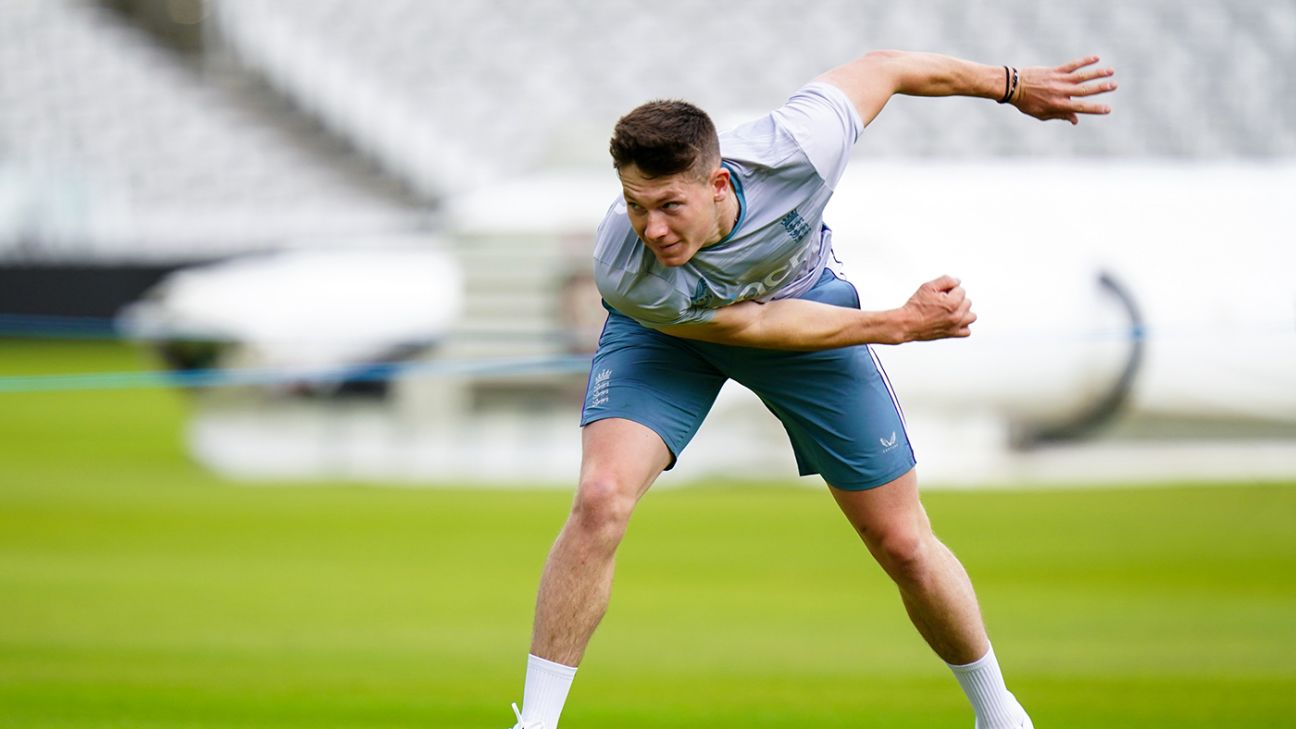 Matthew Potts, the Durham seamer, has been preferred to Craig Overton and will make his England debut in the first Test against New Zealand at Lord’s which starts on Thursday.
Potts, 23, has been the standout bowler in county cricket this year, taking 35 Championship wickets at 18.57 for Durham. Ben Stokes, England’s new captain, has played alongside him and, like Rob Key, the managing director of men’s cricket, has been impressed.
England named a 13-man squad for the first two Tests and signalled that Yorkshire’s Harry Brook would be the spare batter, with a new-look top six of Alex Lees and Zak Crawley opening, Ollie Pope in an unfamiliar role at No. 3, and a middle-order engine room of Joe Root, Jonny Bairstow and Stokes.
Ben Foakes will play his first home Test, keeping wicket and batting at No. 7 with James Anderson and Stuart Broad sharing the new ball after their recalls and Jack Leach selected as the frontline spinner.
ESPNcricinfo Ltd
By Potts’ own admission, an England debut “wasn’t at all on the radar” at the start of his season but he has benefitted from an injury crisis which has seen at least eight realistic seam-bowling options ruled out of the first Test.
Overton is widely considered to be the better batter of the two but struggled on England’s tour of the Caribbean in March and Key said in May that sees Potts as “a point of difference” from Anderson and Broad. He is not a genuine fast bowler but can reach speeds north of 140kph.
“I like the look of this Matt Potts,” Key said. “I’m pretty excited by what he offers. We see him as a point of difference. You see the way he runs in, the way that it looks like if you’re facing him, you’re in a proper contest… these are the picks I get really excited about.”
Related
Potts has never played a first-class match at Lord’s, having been rested for Durham’s Championship game against Middlesex two weeks ago on the back of six consecutive games. “I’ve had two chilled-out weeks, bowling a few overs and just fine-tuning everything,” he said on Monday. “I was a bit on simmer but now I’m raring to go and very, very excited.
“It would mean everything to make my debut at the Home of Cricket. There is a little difference in the intensity but I’m honestly looking to change nothing about what’s got me here. I’m just going to run in and bowl hard, bowl my areas and see if that works.”
Potts is due to bat at No. 8 for England, even though he has spent the vast majority of his first-class career batting at No. 9 or 10. He has regularly been used as a nightwatchman and has two first-class fifties and a hundred in second-team cricket, but has managed only 65 runs in seven Championship innings this season.
Tags: Ben Foakes, Craig Overton, England, England vs New Zealand, ICC World Test Championship, Jack Leach, James Anderson, Matthew Potts, New Zealand, New Zealand in England, Stuart Broad