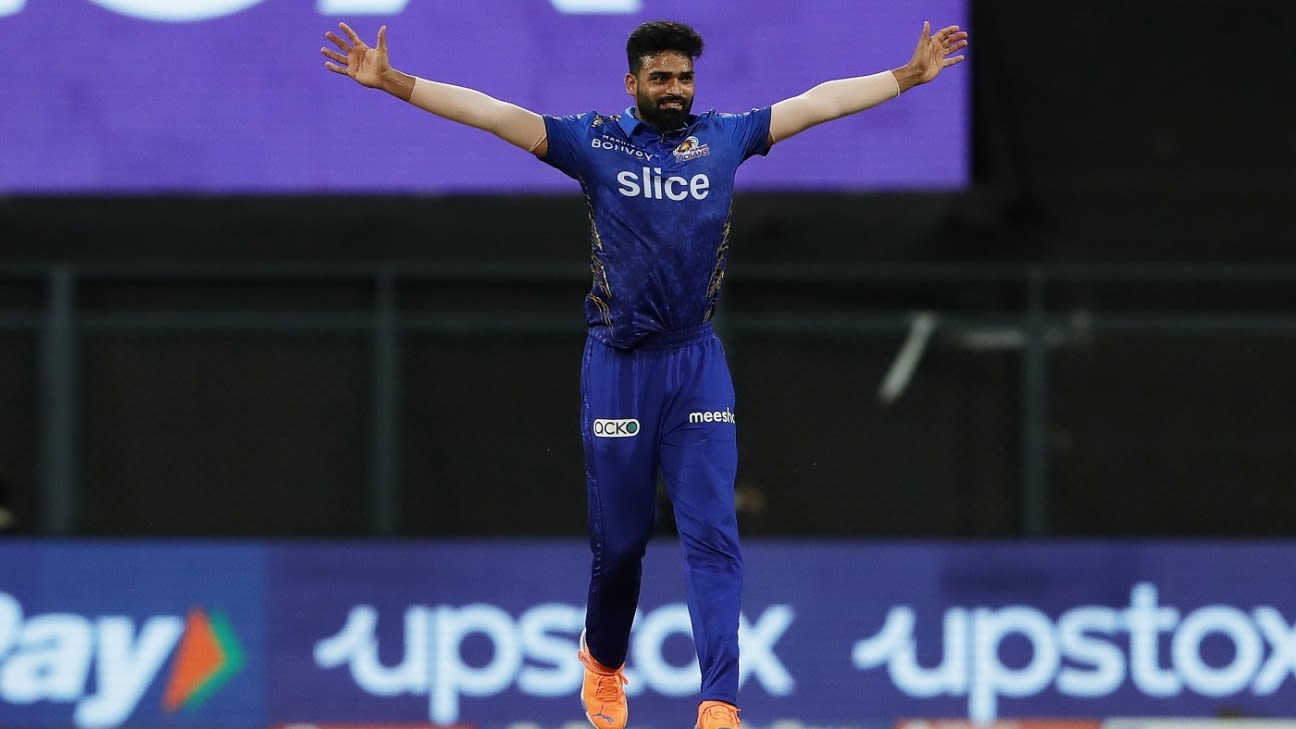 When Kumar Kartikeya Singh left home in Uttar Pradesh nine years ago, he had decided to return only after achieving something. On April 30, Kartikeya lived a dream many Indian youngsters aspire: to play in the IPL. Having originally joined the franchise as a net bowler, Kartikeya graduated into the main squad and helped Mumbai to victory on debut, against Rajasthan Royals, with 1 for 19 in his four overs.
Kartikeya is still pinching himself at the pace at which his life has turned a corner in a matter of months. But he will never forget that day when he joined the Mumbai camp as a net bowler a few years ago and stood next to legends of Indian and world cricket. “When I reached, I couldn’t take my eyes off Rohit Sharma, whom I had only watched on TV till then. I saw him and Sachin [Tendulkar] face-to-face,” Kartikeya told Mumbai’s social channel.
The day of reckoning arrived against Royals, but Rohit was around to calm the nerves of the 24-year-old, who is originally from Uttar Pradesh although he plays for Madhya Pradesh in domestic cricket.
Related
“When Rohit bhaiya handed me the ball, he told me to focus on my bowling and bowl freely without a worry and that he would take care of everything,” Kartikeya said. “He then praised me after my spell and the coaches lauded me for not being nervous and being brave.”
Kartikeya took the prized scalp of Royals’ captain Sanju Samson, helping limit them to 158 for 6.
That match holds a lot of significance for Kartikeya, who has led an itinerant life since leaving the KVS cricket club in his native Sitapur in Uttar Pradesh for Delhi, where he was under Sanjay Bharadwaj’s tutelage for six years, and then to Shahdol in Madhya Pradesh, where he began taking bigger strides. He got through the trials there, something he was unable to in Delhi and Uttar Pradesh, and made it to the Under-23 squad of Madhya Pradesh as well as the Ranji Trophy trials the following year.
He made his Vijay Hazare Trophy debut in 2018-19 and picked up six wickets in four matches that season – the third-most for Madhya Pradesh.
After doing well in his first year of professional cricket, Kartikeya called up his father, who is in Uttar Pradesh police, for the first time in six years. “I called my father for the first time in those six years. Though he was happy, he didn’t show it and told me that you still have a lot to achieve and hung up.”
Kumar Kartikeya picked up Dwayne Bravo and Simarjeet Singh in one over•BCCI
Even Bharadwaj told Kartikeya: “this was not the dream we saw. You have to play at a higher level.”
Cut to the day before his IPL debut, which Kartikeya relayed to his father. “When I told my father that I was going to play, he told his battalion and they had a screening on a projector, watching with everyone. When I picked up my first wicket, all of them stood up and applauded. When I saw that video, I saw my father smile and enjoy just like he used to before I started.”
Kartikeya has featured in every match for Mumbai so far since his debut and against Kolkata Knight Riders, he got the wickets of Ajinkya Rahane and Venkatesh Iyer. On Thursday against Chennai Super Kings, he took two more wickets – that of Dwayne Bravo and Simarjeet Singh.
While his and Mumbai’s IPL journey will end next week, Kartikeya is still in no hurry yet to meet his parents. He wants to make one more stop before he heads home. He wants to join the Madya Pradesh squad for the Ranji Trophy knockouts, which will be played in June. With 12 wickets, Kartikeya is MP’s joint-highest wicket-taker in that tournament and he does not want to get distracted by the comforts of being home, which remains his final destination.
“When I left home, I had thought of returning only after achieving something,” Kartikeya said. “After the IPL, I will go to MP to play Ranji Trophy knockouts and go home only after that. I will be going home after nine years and am excited to see my parents’ reaction.”
Tags: Indian Premier League, Kumar Kartikeya, Mumbai Indians, Royals vs Mumbai, Super Kings vs Mumbai