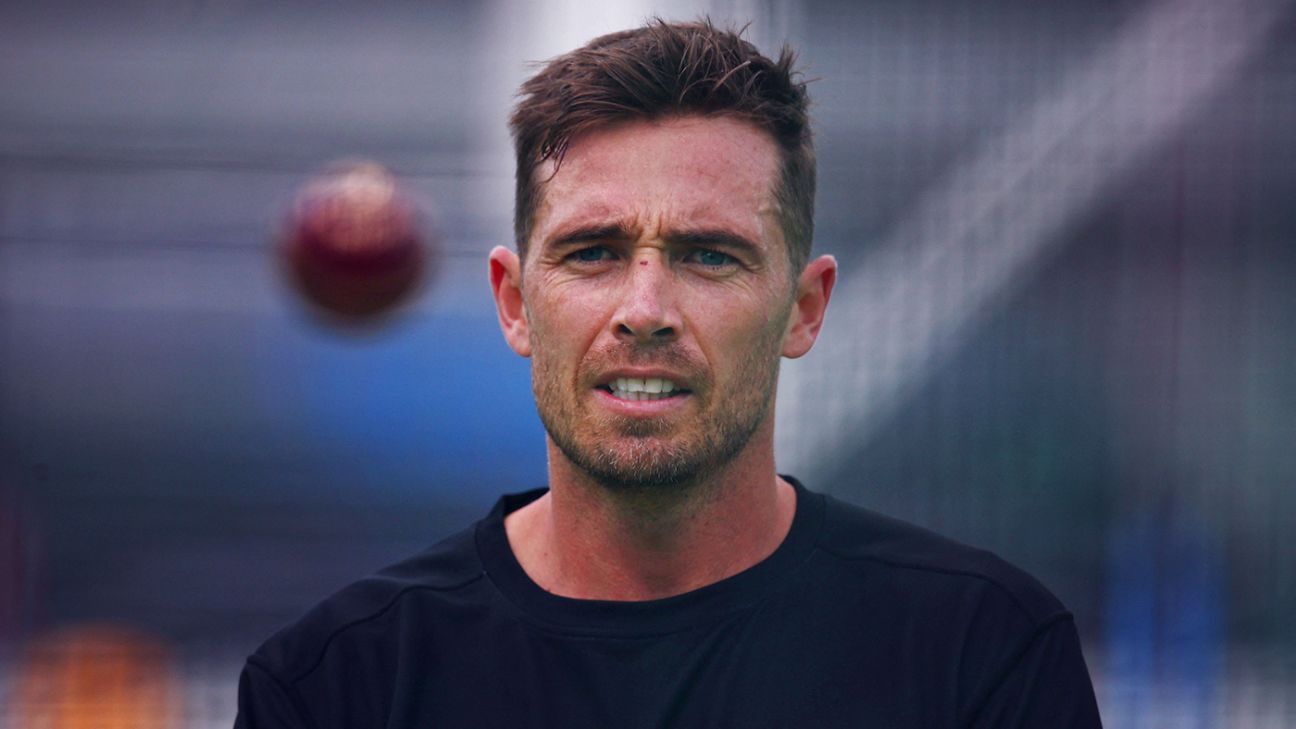 Tim Southee is preparing to make his fifth appearance at Lord’s, a ground where his name is already etched on the visiting dressing room honours board twice. When he first played in St John’s Wood, in only his second Test back in 2008, Brendon McCullum led the way for New Zealand by thrashing 97 off 97 balls; five years later, McCullum was captain and Southee took a ten-for, only for New Zealand to be blown away for 68 in the fourth innings by James Anderson and Stuart Broad.
The tenor of New Zealand’s visits to England has changed markedly over the course of Southee’s career. From being comfortably beaten on those first two tours, in 2015 they recovered from the defeat at Lord’s – which remains the last time England beat New Zealand in a Test match – to secure a 1-1 draw. On last year’s visit to north London, New Zealand controlled the game – Southee taking 6 for 43 in the first innings – before going on to win at Edgbaston and secure a first series win in the country since 1999.
New Zealand’s reward is availing their first three-Test series here since 2008, but it comes with a twist: McCullum will now be guiding the home team, having been appointed England Test coach as part of an ECB revamp.
Related
For Southee, who until a couple of weeks ago was playing under McCullum for Kolkata Knight Riders at the IPL, seeing his former captain walking around in England gear will take some extra getting used to.
Whether or not McCullum – who made the last of his 432 New Zealand appearances in 2016 – can divulge any short-term wisdom that will benefit England, the tourists undoubtedly know what to expect from a team he is involved with.
“It’s exciting, obviously a great challenge for Brendon,” Southee said. “I know him pretty well. Everything he does, he gives it a 100-percent so this will be no different. He’s excited about the next wee while and what lays ahead of him. I’m sure he’ll be doing everything he can to bring the best out of this England Test side.
“He’s a great man-manager and he loves to try to get the best out of people. I’m sure he’ll be doing that here as well. The way he played his cricket was exciting and fearless, and that’s the way he is a person and I’m sure that’s the way he is as a coach as well.
“It will be an exciting brand of cricket, I’m sure. They [England] won’t die wondering I’d imagine if the way he goes about things is anything to go by.”

Those two guys, BJ [Watling] and Ross [Taylor], have been massive parts of the side for such a long time, they’re obviously big holes to fill. But we’ve got guys who have been playing some pretty good cricket and waiting in the wings for a while.
Tim Southee on New Zealand’s talent pool

Southee will likely miss his long-time new-ball partner, Trent Boult, when the teams line up on Thursday morning, with the left-armer having only arrived on Monday after helping Rajasthan Royals to the IPL final.
However, New Zealand have good depth in their pace options despite a disrupted build-up. It is less than a week since Southee arrived in the country, but he got through 15 overs bowling in the second innings of New Zealand’s defeat to a County Select XI, and he has vast experience of making the transition between formats over the course of his career.
“Nothing changes compared to the lead-up to any other Test match,” he said. “I love Test cricket and I’m excited to get back into playing some Test cricket after playing a lot of T20 cricket.”
A lot has changed since New Zealand’s World Test Championship win, but they still possess a challenging bowling attack•Gareth Copley/ICC/Getty Images
New Zealand are the reigning World Test champions but there is a hint of transition around their side, with Ross Taylor and BJ Watling having retired since victory over India in Southampton last summer. They currently lie sixth on the WTC Points table, and Southee agreed that there would be “a little bit extra” on the series against England given their need for points.
“It’s very important, dropping a couple of Test matches in our home summer puts a little bit extra on this series. But our focus is the first five days here at Lord’s, then we shift on to the second Test and the third. As a group, we try to play what’s in front of us, attack it one Test at a time.
“We’ve been lucky that we’ve had a pretty consistent group of guys for a long period of time.” He said, “Those two guys, BJ and Ross, have been massive parts of the side for such a long time, they’re obviously big holes to fill.
Devon Conway, who made his double-hundred on debut at Lord’s, will need to step up again with New Zealand in a transition phase•Getty Images
“But we’ve got guys who have been playing some pretty good cricket and waiting in the wings for a while. Tom Blundell’s had glimpses, played the last year and made some pretty handy contributions and the likes of Devon Conway and Will Young have impressed in their short international careers so far.”
Conway, of course, scored a double-hundred at Lord’s on Test debut this time last year. And even without Boult and Henry Nicholls, who is unlikely to play as he rehabs from a calf strain, it has been clear for a while that New Zealand’s ability to maximise their resources is an example for most other nations – not least England, as they attempt to reboot their Test fortunes under McCullum.
“I guess in New Zealand we’ve learned to box above our weight for a long period of time,” Southee said. “We’re obviously challenged with just being a small country, the lack of people playing and lack of resource. The Kiwi way is to muck in and get the best out of what we’ve got. That’s not going to change, we’re not always a sudden going to have a lot of [players] to choose from. I think it’s just about making the most of what we’ve got. Sometimes less is more as well. And I think it’s in our DNA to try, not only the cricket side, as Kiwis is to just enjoy it and make the most of what we’ve got.”
Tags: England vs New Zealand, ICC World Test Championship, New Zealand, Tim Southee