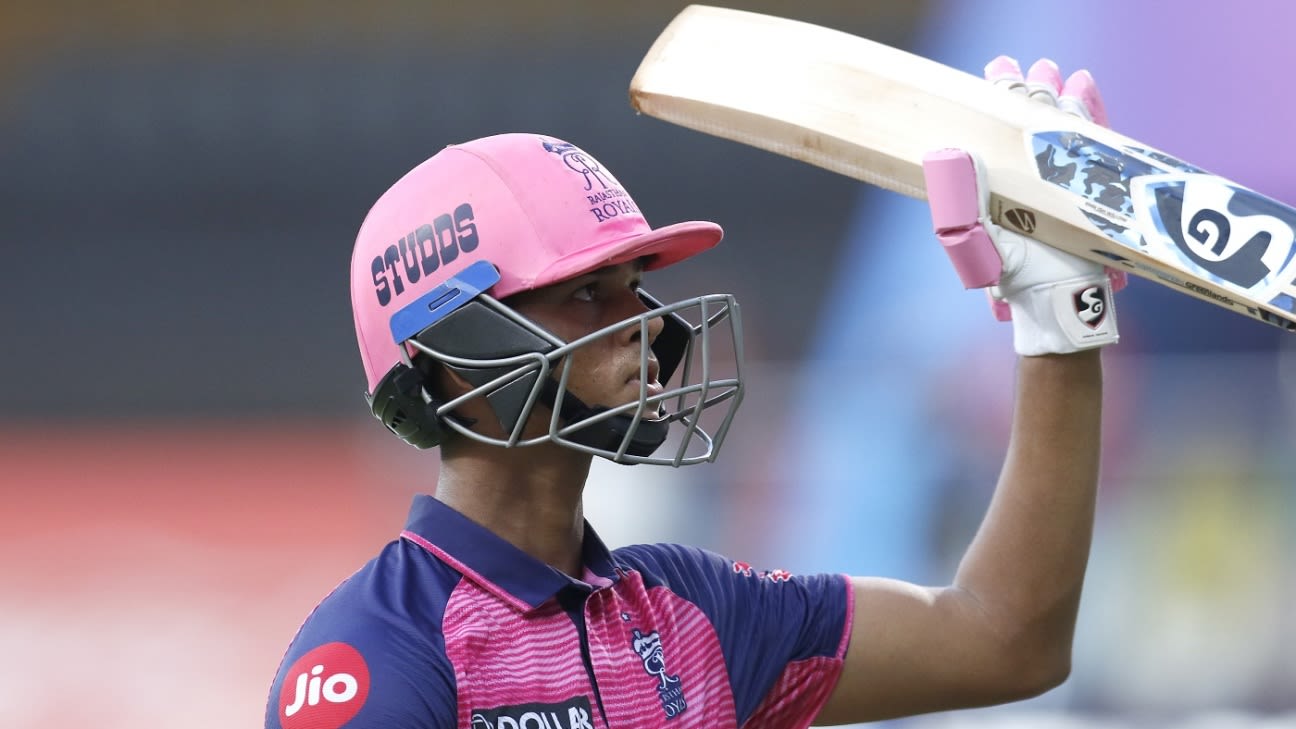 Rajasthan Royals 190 for 4 (Jaiswal 68, Hetmyer 31*, Padikkal 31, Arshdeep 2-29) beat Punjab Kings 189 for 5 (Bairstow 56, Jitesh 38*, Chahal 3-28) by six wickets
A returning Yashasvi Jaiswal scored a sparkling half-century from the top of the order as Rajasthan Royals chased down 190 against Punjab Kings with two balls to spare. The win helped them consolidate their third position on the points table.
Cameos from Jos Buttler and Sanju Samson gave Royals a flying start, but with Devdutt Padikkal struggling at No. 4, Jaiswal almost singlehandedly steered the chase for a large part with his 68 off 41 balls. Royals still needed 49 off 34 balls when he was dismissed, and despite Padikkal dragging them back with a 32-ball 31, Shimron Hetmyer took them over the line with an unbeaten 31 off 16 balls.
Earlier, after Samson lost his tenth toss in 11 games, Punjab Kings rode on Jonny Bairstow’s half-century and fireworks towards the end from Jitesh Sharma and Liam Livingstone to post a formidable total. It looked sufficient at the halfway stage, but didn’t turn out to be.
A mixed day for Boult
Opening the bowling, Trent Boult found swing with his first delivery, but it ended up on the pads and Bairstow flicked it through midwicket for four. Three balls later, Boult switched to around the wicket, but again strayed down the leg side. Bairstow helped it past short fine leg for another boundary. But Boult made a strong comeback in his second over – bowling a maiden to Shikhar Dhawan – but went for 18 in his third as Bairstow and Shikhar hit him for two fours and a six.
Bairstow, Rajapaksa keep the attack going
R Ashwin sent back Shikhar in the final over of the powerplay, with Buttler back-pedalling at mid-on, leaping high, and plucking the ball out of the air with his right hand. But Bairstow and Bhanuka Rajapaksa kept the attack on. Facing only his third ball, Rajapaksa smashed Yuzvendra Chahal for six. Two overs later, he launched Kuldeep Sen over long-off before hitting Prasidh Krishna for back-to-back fours. Bairstow, too, found the boundary at regular intervals and the two took the side to 88 for 1 after ten overs.
Yashasvi Jaiswal, in his comeback match, held the Royals’ innings together for the best part•BCCI
Chahal strikes back
Coming into this game, Kings had the lowest scoring rate (6.80) against spin among the ten teams in the tournament. And spin once again proved to be their Achilles’ heel. Rajapaksa stepped out to Chahal only to be bowled. Bairstow brought up his half-century, his first of the season, off 34 balls but Chahal returned to dismiss Mayank Agarwal and Bairstow in the same over. That left Kings on 122 for 4 after 15 overs with two new batters at the crease.
Jitesh, Livingstone finish strongly
It looked like Royals might restrict Kings to 175 but Jitesh took the lead and hit Prasidh for two consecutive fours before walloping Chahal for a six. Livingstone was on 12 off ten balls before hitting Prasidh for a six and a four in the space of three balls. But the seamer cut his innings short when he moved too far across to a full and straight ball and was bowled. In the final over, Jitesh hit Sen for 6, 4, 4 off successive balls to ensure a strong finish.
Royals blazing start
It was a daunting target but Royals got off to a blazing start with Jaiswal hitting Sandeep Sharma for two fours and six in the first over. In the fourth over, Buttler took Kagiso Rabada to the cleaners, smashing him for three fours and six. But the bowler had the last laugh. On the last ball of the over, Buttler shuffled across to lap Rabada over short fine leg but it was bowled full at his feet. Buttler realised the ball wasn’t there for the shot, changed his mind and tried to help it over short third man but couldn’t clear the fielder.
It looked like Kings could breathe easily for a while, but Buttler, with a mix of power, timing and luck, had collected four fours in the first seven balls he faced. So, at the end of eight overs, Royals were 85 for 1.
2:50

Vettori: Kings will look back and say they were 15 runs short

Jaiswal, Hetmyer make up for Padikkal’s struggles
Rishi Dhawan sent Samson back for 23 off 12 balls when the batter skied one to cover-point. Batting at No. 4, Padikkal got stuck in first gear but Jaiswal’s strokeplay kept Royals abreast with the asking rate.
With 77 needed from eight overs, Jaiswal took three fours in one Rishi over. Against Rahul Chahar, he brought out the reverse sweep to fetch another boundary. He holed out to long-on off Arshdeep Singh, with the seamer conceding only three in the 15th over, but Hetmyer dragged Arshdeep for two leg-side fours in his next over to bring down the asking rate.
In the 18th over, bowled by Rabada, Padikkal too chipped in with two fours with a Hetmyer six sandwiched in between. That over produced 16 runs and brought the equation down to 11 from 12 balls. Arshdeep once again conceded only three and dismissed Padikkal, but the equation was very much in Royals’ favour.
With eight needed from the final over, Chahar started with a wide down the leg side. Hetmyer then lofted the next ball over long-on to level the scores. Two balls later, he chipped a full toss towards long-on for the winning run.
Tags: Arshdeep Singh, Indian Premier League, Jitesh Sharma, Jonny Bairstow, Jos Buttler, Liam Livingstone, Punjab Kings, Punjab Kings vs Royals, Rajasthan Royals, Shimron Hetmyer, Yashasvi Jaiswal, Yuzvendra Chahal