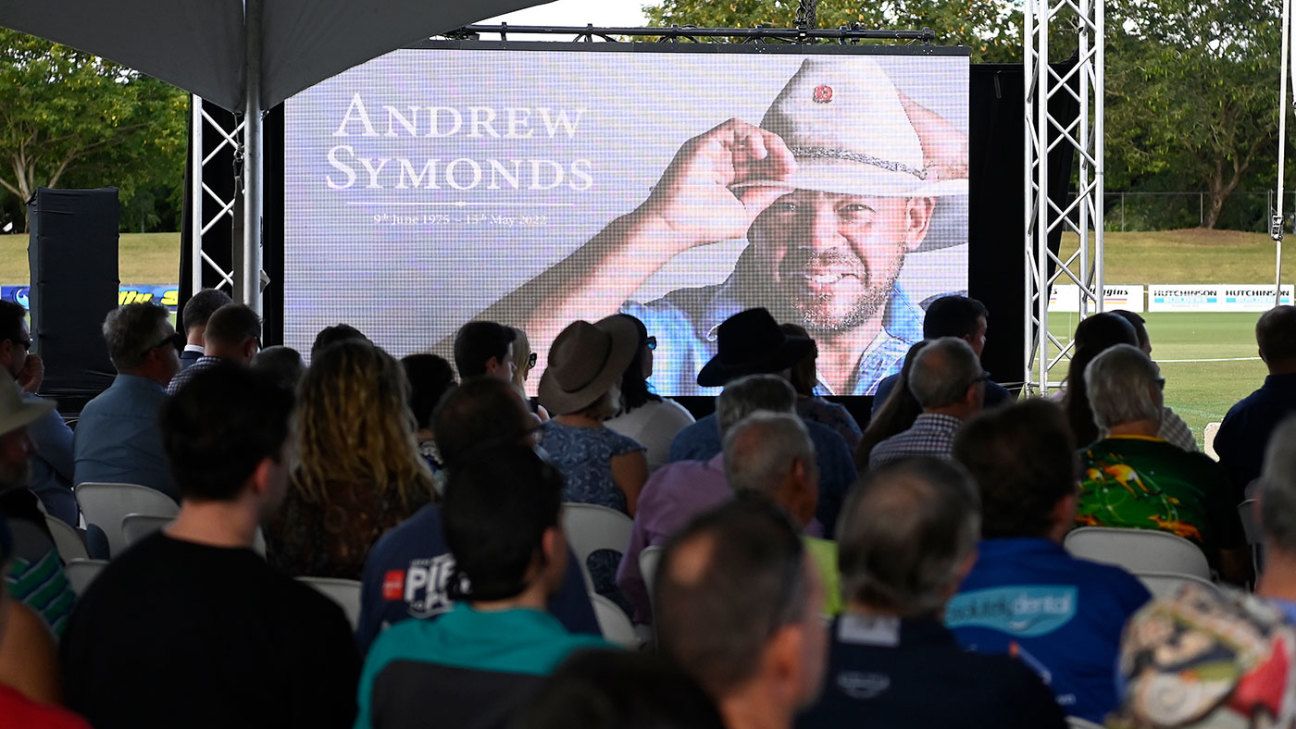 There were jokes, laughs, sombre moments and a poem titled ‘You ripper Roy’ as Andrew Symonds was farewelled in style on Friday.
Family, friends, cricketing team-mates and fans gathered at Townsville’s Riverway Stadium for the public memorial service, following a private funeral on Friday morning.
The likes of former Australian captain Ricky Ponting and team-mates Adam Gilchrist and Darren Lehmann entertained, reciting old tales of their time as players and how ‘Roy’ impacted their lives on and off the field. Two of his closest friends, Jimmy Maher and Matthew Mott, also spoke of his of life and legacy.
Related
Poet Rupert McCall remembered the times he’d receive telephone calls from Symonds late at night, hoping to hear a couple of his favourite poems as he sat by the fire with his mates.
McCall delivered every time, and did so again with his final ode to the life of Symonds, speaking of the “white-lipped assassin” and “six-monster snapper” that silenced the critics when resurrecting his Test career with a famous knock against South Africa on Boxing day.
“Bowlers once dominant cowered in fear, he came and he saw and he saved his Test career,” McCall recited. “For now let’s acknowledge the dream of a boy and the day he fulfilled it. You ripper, Roy.”
Earlier, Cricket Australia director Greg Rowell began the proceedings after an opening video tribute, hailing Symonds’ commitment to the team, others and everyone before himself.
Caps, hats, his bat and fishing equipment to honour Andrew Symonds•Getty Images
“He was a man for others, and it showed in the mastery and the breadth of the skills that had little return or dividend to him in his pursuit of his personal dreams,” Rowell said. “He owned his mistakes, he put others before himself to see what has to be done, and to do it. To assess what had to be said, and to say it.”
Ponting, Lehmann and Gilchrist all hailed Symonds’ efforts around both his state and national teammates, and his calm demeanour that settled them even in the most tense settings.
It was that effort that Ponting said, inspired him to get back to Australia whilst suffering from gastroenteritis following his duties in the IPL.
“I had to lay down upstairs [before the service]…and then I just had these words ringing in my head from Roy up there,” Ponting said. “Get up, get up, get down there, you got a sore belly have ya,” he added to a chorus of laughter.
Lehmann called him the best player he ever coached, while Gilchrist said what struck him the most was how often old friends had spoken of Symonds’ off-field life, with barely a mention of his cricketing achievements.
“We’ve spoken so much about him as a person we forget to talk about the level of cricketer that he was,” Gilchrist said.
Symonds’ larrikin nature and true Australian character resonated with cricket lovers across the country during his career.
It was that personality that ensured he was admired for his bullish nature with the bat and arrow-like precision on the field for state and country.
To the sounds of Hey True Blue, the memorial service ended but the memory of Andrew ‘Roy’ Symonds will live on in the hearts of Australian cricket fans forever.
Tags: Adam Gilchrist, Andrew Symonds, Australia, Queensland, Ricky Ponting