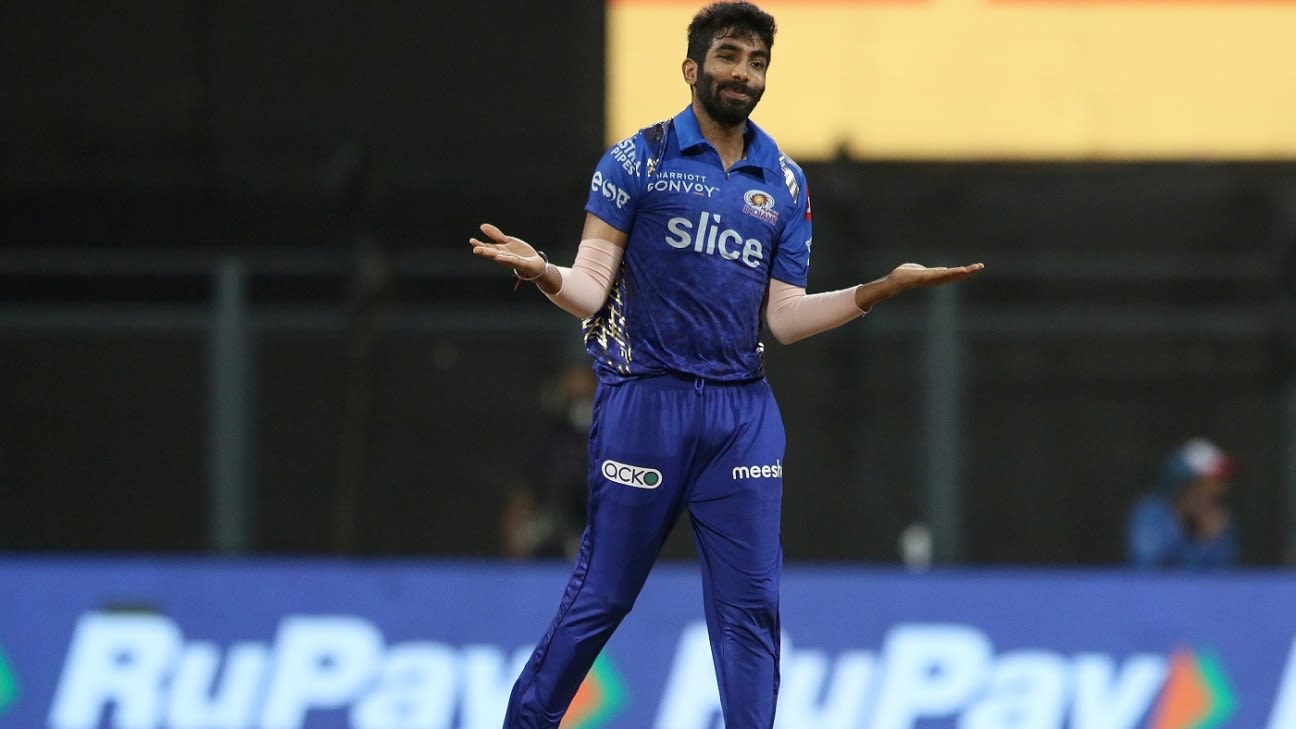 Mumbai Indians 160 for 5 (Kishan 48, David 34, Thakur 2-32) beat Delhi Capitals 159 for 7 (Powell 43, Bumrah 3-25) by five wickets
Ten balls. That’s all it took. Ten balls of carnage to end Delhi Capitals’ season and thrust Royal Challengers Bangalore into the playoffs.
Tim David would have been out for 0 had they opted to review a caught-behind decision in the 15th over when the equation was 65 off 33.
Instead he got to face 10 more balls and score 34 heartbreaking runs to punish Rishabh Pant and his men for an error that will haunt them for what will feel like forever.
Bumrah roars
Even in this atrocious season, Mumbai Indians managed to have a say in who would win the IPL. They restricted Capitals to 159 for 7 in a must-win game.
Jasprit Bumrah (4-0-25-3) was extraordinary. Even on a slow pitch, he hurried batters with his pace and picked up the kind of wickets that will form a fast-bowling hype reel. Prithvi Shaw bounced out. Mitchell Marsh caught at first slip. Rovman Powell cuh-lean bowled.
The thought of him bowling in tandem with Jofra Archer next season is just bonkers.
Rovman Powell lined up Hrithik Shokeen’s fingerspin•PTI
Powell power
Wankhede tonight was all about pace off the ball and even a hitter of Rishabh Pant’s repute was going at 10 off 15 and later 24 off 28. Rohit Sharma was worse: 2 off 13.
Capitals needed someone to defy the conditions just like Bumrah did and up stepped Powell. With the score at 50 for 4 in the ninth over, he understood that he needed to bat time. Then, after he had taken the time to assess the pitch, he took a calculated risk, targeting a fingerspinner who brought the ball into him. Shokeen was smashed for 20 runs in the 12th over.
This was a fine finisher at work, respecting the conditions when he needed to, and then winning a favourable match-up to bring his team back into the game. Powell made 43 off 34 balls, the best of those runs a pull for six off the virtually unplayable Bumrah.
Capitals’ fight
At 5.1 overs, Capitals had a 57% chance of winning the game. At 5.2, when Rohit fell, that rose to 62%
At 11.2 overs, Capitals had a 43% chance of winning the game. At 11.3, when Ishan Kishan fell, that rose to 51%
At 14.2 overs, Capitals had a 69% chance of winning the game. At 14.3, when Dewald Brevis fell, that rose to 77%.
The bowlers did everything they could to keep them in the game. Then came 14.4. Thakur to David. 0 runs. It was a gorgeous ball. Full but not quite drivable. Just kissing the pitch and whooshing through to the keeper.
The appeal was instant. Umpire Tapan Sharma was unmoved. Pant and Thakur got together. They spoke at length. Then they separated and all was good with the world until the replay came on the big screen and UltraEdge had a big spike as ball passed bat.
Pant kicked the turf. Ponting fumed in the dugout. David kept hitting sixes. Capitals tried to hide the ball out of his reach. But he’s 6’4 and hella strong so even mis-hits tend to go the distance. Crucially, unlike the basic power-hitter, he has boundary options on the off side as well. Two of his three sixes went into the crowd at long-off. There was a cuh-rrrrunnching cover drive for four too.
The Capitals couldn’t believe it. Every last one of them skulked around the Wankhede outfield, expressionless. For the second season running, their IPL had ended in heartbreak.
Tags: Capitals vs Mumbai, Delhi Capitals, Indian Premier League, Jasprit Bumrah, Rishabh Pant, Rovman Powell, Royal Challengers Bangalore, Tim David