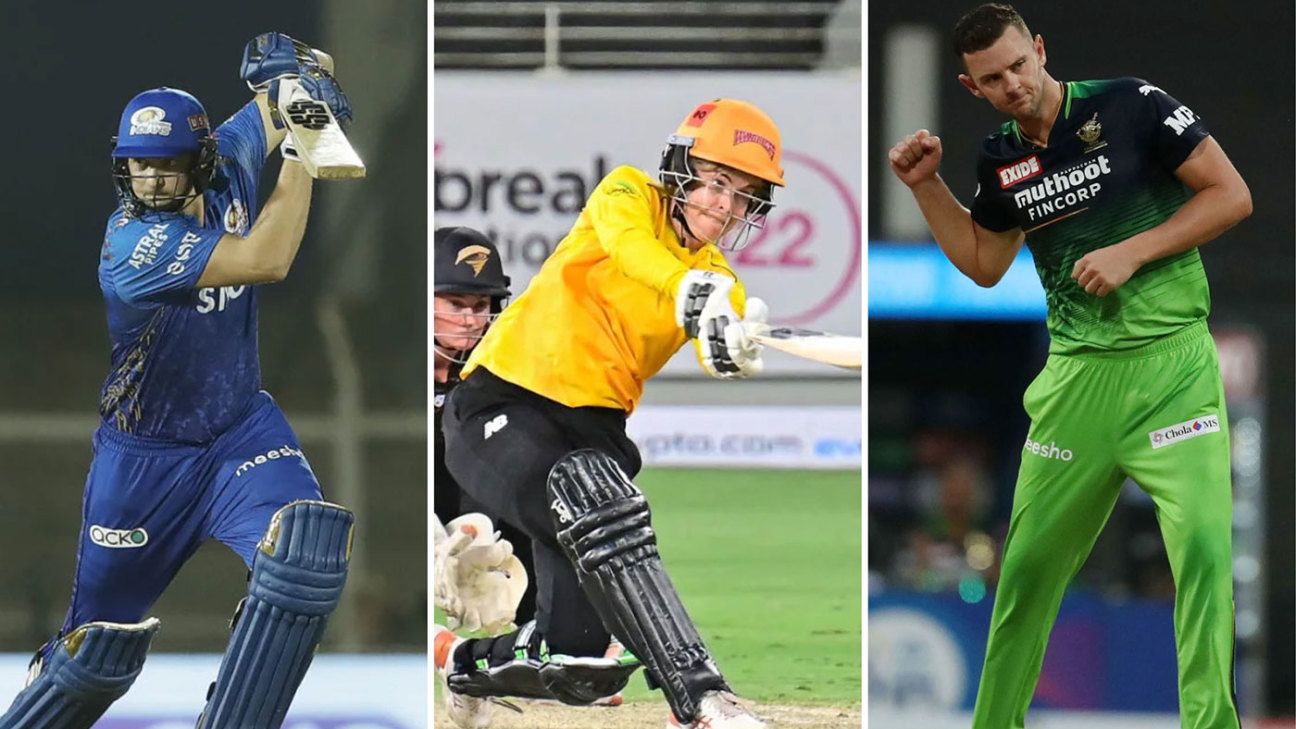 David Warner insisted he did not need any extra motivation against his former franchise Sunrisers Hyderabad, but he still made a big statement against the side that dropped him last season when he plundered 92 off 58 balls to set up a Delhi Capitals victory. Warner was going nicely against Chennai Super Kings as well before missing a reverse sweep against Maheesh Theekshana in what became a heavy Capitals defeat to dent their hopes of progression. However, with at least three innings remaining, Warner has a chance to become the first overseas batter to reach 6000 runs in the tournament.
Related
Barring a miracle it has come too late to save Mumbai Indians’ season, but Tim David has been making up for lost time after mysteriously sitting on the bench. Following his handy cameo against Rajasthan Royals last week he went further with a match-defining 44 off 21 balls against Gujarat Titans. He sensibly played out Rashid Khan before plundering the final overs from Lockie Ferguson and Mohammed Shami. It brought praise from ESPNcricinfo analyst Daniel Vettori. “There’s a lot going on to be impressed with,” he said. “You just don’t see such clean hitting with such pure shot-making at the back end of an IPL innings.”
Mumbai’s victory in that game was sealed by Daniel Sams‘ nerveless final over when he managed to defend just eight runs, made more impressive by the fact it came against the finishing power of Rahul Tewatia, David Miller and Rashid. It was a show of strength from Sams who was taken for 35 off an over by Pat Cummins earlier in the competition.
Marcus Stoinis turned on the power•BCCI
Josh Hazlewood continued to excel as he helped Royal Challengers Bangalore to back-to-back victories to create some daylight between fourth spot and the chasing pack. In a combined eight overs against Super Kings and Sunrisers he conceded just 36 runs. For a pace bowler who has delivered a minimum of 20 overs in this year’s edition, Hazlewood has comfortably the best economy rate and the third-best of any bowler. In the match against Sunrisers, Glenn Maxwell also produced a handy display with 33 off 24 balls followed by a wicket in the first over the chase. That came after a crucial return of 2 for 22 against Super Kings.
Marcus Stoinis gave a display of his power against Kolkata Knight Riders when he took Shivam Mavi for three consecutive sixes at the start of the 19th over. Just when thoughts were turning to what could be, Stoinis picked out deep midwicket but the pain continued for Mavi when his last two balls also went for six against Jason Holder. Stoinis’ 28 off 14 balls became his 10th innings of 20-plus at a strike-rate of 200 or more, with seven of them coming in just over the last 12 months in a sign of his batting development in his various middle-order roles.
Dan Worrall celebrates another breakthrough•Getty Images

Peter Handscomb, who will be part of the Australia A squad in Sri Lanka next month, played an important hand in Middlesex’s outstanding chase against Sussex as they hunted down 370 with time to spare. He made 79 out of a second-wicket stand of 209 with Sam Robson who dominated with 149. After the match, Handscomb endorsed Australian-born Robson, who has previously played seven Tests, as worth another look by the England selectors.
Daniel Worrall has swapped Australian domestic cricket for the county scene as a local player with a British passport and after a wicketless start for his new team Surrey had an important part to play in a convincing victory over Northamptonshire. Across the two innings, he claimed five wickets including the scalp of New Zealand batter Will Young.
It had not been an easy start for Nathan McAndrew at Warwickshire with 0 for 100 in his first outing against Somerset, but he got off the mark with a hard-working haul of 4 for 85 against Lancashire. It prevented the home side from building a more substantial lead which may have left Warwickshire under more pressure as they batted out the final day amid some scares against Matt Parkinson.
Michael Neser‘s three second-innings wickets were an important part of Glamorgan’s victory against Leicestershire. Neser was left out of the Australia A squad for Sri Lanka with national selector George Bailey saying he saw more value in him continuing to bowl in English conditions with a view to the 2023 Ashes tour. After four games Neser is Glamorgan’s leading wicket-taker with 14 wickets at 25.50.
Georgia Redmayne has found form in Dubai•FairBreak Global

This new T20 competition – an innovative creation bringing together some of the leading players from women’s game with those from the Associate nations – got underway in Dubai. While most Australians have stayed at home to rest there are a few taking part. Georgia Redmayne, who was a travelling reserve at the recent World Cup, has shown some terrific form for Warriors including an unbeaten 80 in the opening match. Nicola Carey struck 70 off 43 balls for Spirit as they recovered from 15 for 3 to comfortably beat Sapphires who have Elyse Villani, Grace Harris and New South Wales legspinner Jade Allen in their team. Villani struck an unbeaten 62 in his previous outing against Warriors.

It will have been a frustration to Marnus Labuschagne that he had a quiet week with the bat – falling for 17 and 13 against Leicestershire – but he made a mark with the ball on the opening day of the game. His 3 for 65 played a key part in restricting Leicestershire’s first innings. He broke an opening stand of 90 then, with the visitors solidly placed at 199 for 3, put himself on a hat-trick by sliding quicker deliveries through Wiaan Mulder and Scott Steel. The hat-trick delivery finished with Labuschagne’s hands on his head as the inside edge squirted safely into the leg side.

Performance of the week

It goes to Tim David. It could easily have been David Warner, but his T20 credentials are secure. David is still forging his path and it would have been easy for him to become frustrated and confused by warming the bench for a struggling franchise. However, offered the opportunity in recent matches he has taken it with both hands. It will take something remarkable for Mumbai to progress this season but they need to look to the future and David, surely, is a big part of that. And then there’s Australia.
Tags: Australia, County Championship Division One, County Championship Division Two, Daniel Sams, Daniel Worrall, David Warner, Georgia Redmayne, Indian Premier League, Josh Hazlewood, Marcus Stoinis, Nicola Carey, Peter Handscomb, Tim David