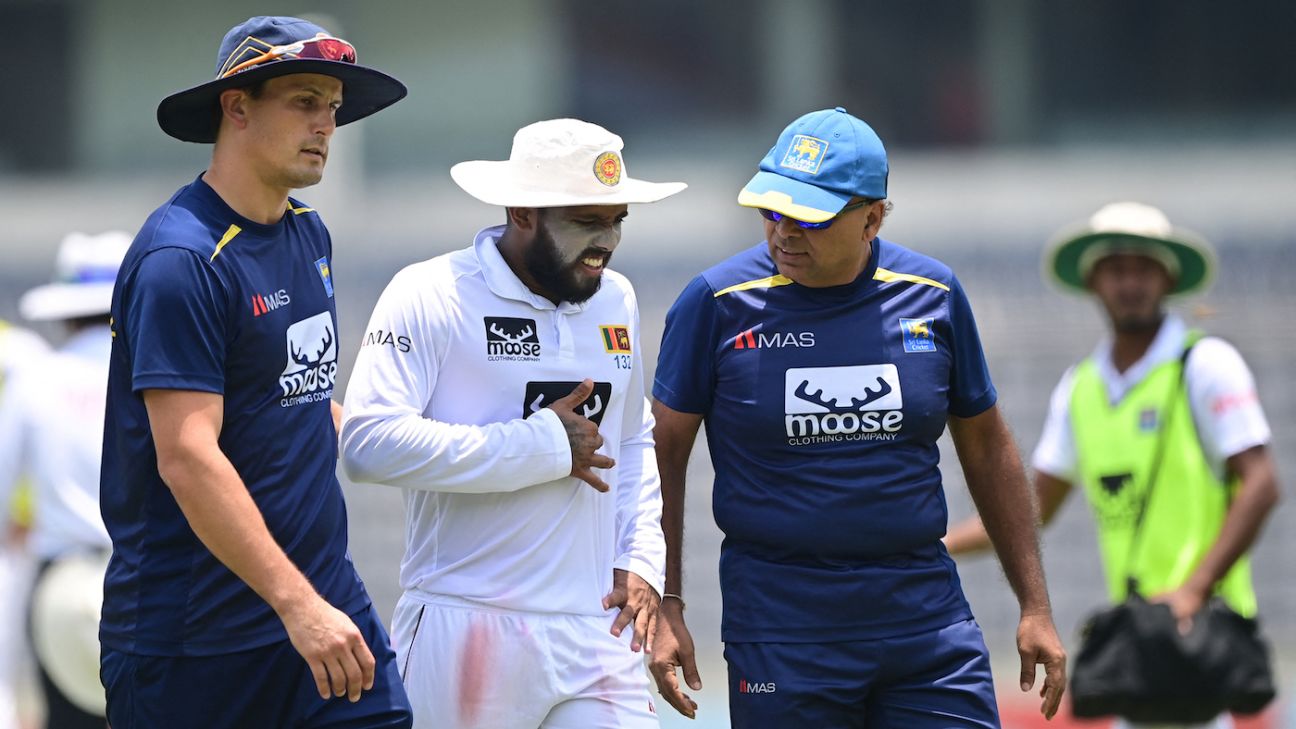 Kusal Mendis is still in a Dhaka hospital, after leaving the field holding his chest minutes before lunch on the first day of the second Test, but an ECG test has “come out clear”. The doctors “suspect muscle spasms” as the reason for his discomfort, Sri Lanka team manager Mahinda Halangoda said, adding that Mendis is “still under observation”.
It was the 23rd over of the Test, with Bangladesh in their first innings, when Mendis appeared in discomfort and lay down on the field. He was immediately tended to by the Sri Lankan medical staff. He left the playing area holding his chest soon after.
In the initial update, BCB doctor Manzur Hossain Chowdhury had said that Mendis had to be taken to the hospital for “proper diagnosis and better management”. According to Chowdhury, Mendis was suffering from dehydration leading into the match, which could be a reason behind his discomfort.
It is unclear at this stage how long he will be in the hospital for, and on his participation in the Dhaka Test.
Mendis scored a solid half-century in the first innings in the Chattogram Test, followed by a quick 48 in the second stint, helping Sri Lanka draw the game.
The conditions in the first Test were extremely trying with the humidity getting to the players. Tamim Iqbal was forced to retire hurt due to severe cramps on day three, while on-field umpire Richard Kettleborough, too, had to leave the field during the fourth day because of the scorching heat. Players were often spotted having drinks breaks under giant umbrellas throughout the course of the Test.
Sri Lanka also had to use a concussion substitute for fast bowler Vishwa Fernando after he was struck by a Shoriful Islam bouncer on the second day in Chattogram. Kasun Rajitha was his replacement. This is Sri Lanka’s last match on this Bangladesh tour.
Tags: Bangladesh vs Sri Lanka, ICC World Test Championship, Kusal Mendis, Sri Lanka, Sri Lanka in Bangladesh