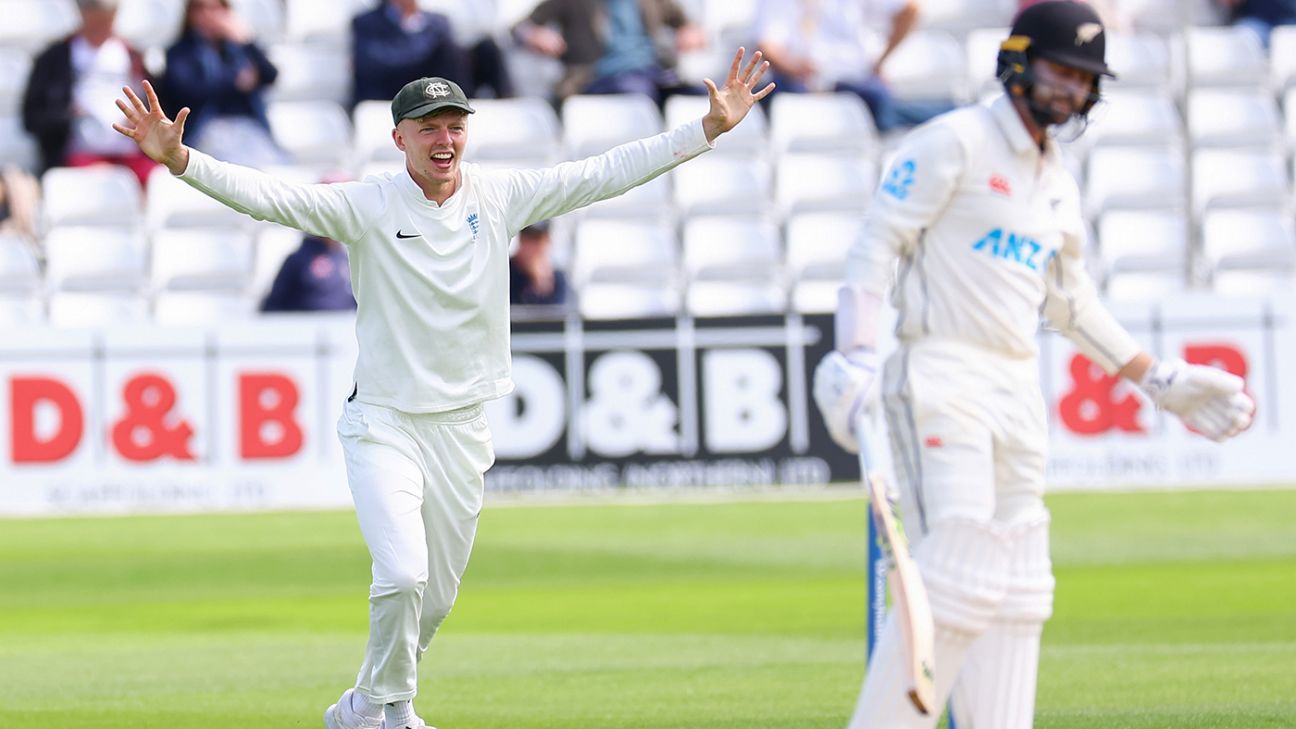 County Select XI 247 and 112 for 1 (Compton 56*, Ajaz 1-12) need 152 runs to beat New Zealanders 362 for 9 dec and 148 (Jamieson 36, Wagner 36, Porter 5-31)
After four playing days of largely serene progress in their build-up towards the first Test, New Zealand were blindsided by the County Select XI at Chelmsford. Jamie Porter ripped out five top-order wickets to belatedly remind the England selectors of his prowess in seaming conditions, and despite recovering somewhat from a parlous position of 9 for 5, the tourists have a scrap on their hands if they are to avert defeat on day four.
This second four-day friendly, after a rain-affected outing down in Hove, has allowed New Zealand to rotate their personnel with a view to getting playing time for as many of the party as possible. But Kane Williamson, the Test captain, managed a nine-ball duck in his only outing before next week’s encounter at Lord’s, while there were single-figure scores for Tom Latham, Will Young, Devon Conway (his second of the match), Tom Blundell and Colin de Grandhomme – all likely starters in the Test XI.
The dismissal of de Grandhomme completed a five-for for Porter inside five overs, leaving New Zealand on 19 for 6. That anaemic scoreline had improved to 70 when the eighth wicket fell, but the County Select XI were still eyeing up a target below 200, only for some timely lower-order resistance from Neil Wagner and Kyle Jamieson to stave off complete collapse. A 63-run stand pushed the New Zealanders towards something defendable, before Worcestershire left-armer Ben Gibbon picked up both to complete an impressive outing.
The New Zealanders’ second-innings 148 meant the County Select XI would need to score 264 for victory – more than they had managed collectively the first time around. But Ben Compton continued his prolific summer with an obdurate, unbeaten half-century and although Ajaz Patel removed Dom Sibley after an opening stand worth 88, the ECB’s scratch team will return needing 152 more with nine wickets in hand in the morning.
There had been little to suggest that New Zealand were in for such a torrid morning examination when the unbeaten openers, Young and Latham, resumed the innings in bright sunshine, having played out a maiden from spinner Liam Patterson-White the previous evening. But Porter struck with his third, 12th, 16th and 18th balls to leave the visitors five down and not yet into double-figures.
Young was the first to go, lbw for a three-ball duck playing no stroke to one nipping back in. Williamson, who joined up with the squad this week after leaving the IPL early to witness the birth of his second child in New Zealand, had spent some time in the field on Friday and now walked out in place of Conway in his customary berth at No. 3. But quickly heading in the opposite direction was his deputy, Latham, who thick-edged Gibbon’s sixth delivery to third slip.
Ben Compton led the chase with an unbeaten half-century•Getty Images
Williamson has not played Test cricket since November, having experienced issues with a chronic elbow problem. Although he was fit enough to play for Sunrisers Hyderabad at the IPL, his returns were underwhelming, and he would have been hoping for a lengthy stay in the middle ahead of his comeback. Instead, Porter found extra lift from a length outside off stump to induce a startled prod to slip.
With Conway, another recent arrival from India, also looking for a workout against the red ball after making 4 off 14 in the first innings, Porter struck again from round the wicket, rapping the left-hander on the pads. Two balls later, wicketkeeper Blundell propped forward to also be given out lbw – although he lingered for some time after the decision, with a strong suggestion that he had got an inside edge.
At that stage Porter, who has seemingly drifted out of contention for a Test cap despite being called up to the England squad in 2018, had figures of 4 for 4 from three overs; and they improved still further when de Grandhomme defended the ball softly down into the turf, only for it bounce back and dislodge the bails.
The New Zealanders finally got the scoreboard moving with the arrival of Tim Southee, who cracked five fours and a six during a 17-ball innings. He scored 34 out of the 37 added in partnership with Daryl Mitchell for the seventh wicket, before another belligerent slap down the ground off Patterson-White was intercepted by the diving Gibbon at long-on. Mitchell then became the eighth wicket to fall, providing a success for Jack Blatherwick, as his ungainly attempt to pull ended up in the hands of point.
From there, Wagner and Jamieson dug in for 20 overs of respectable batting that took the innings into the afternoon session. Gibbon eventually trapped Wagner with a full delivery angled into the pads, before Jamieson’s attempt to thrash the ball into Hayes Close ended up in the hands of Porter at long-off. Wagner and Southee both then delivered ten overs, their first proper bowl before Lord’s, as the County Select XI made a good start in pursuit of victory; Sibley fell cutting at Ajaz but the spinner dropped Tom Haines off Wagner in the penultimate over to sum up New Zealand’s day.
Tags: Ben Compton, Ben Gibbon, First Class Counties XI, Jamie Porter, Kane Williamson, N Zealanders vs FCC XI, New Zealand, New Zealand in England