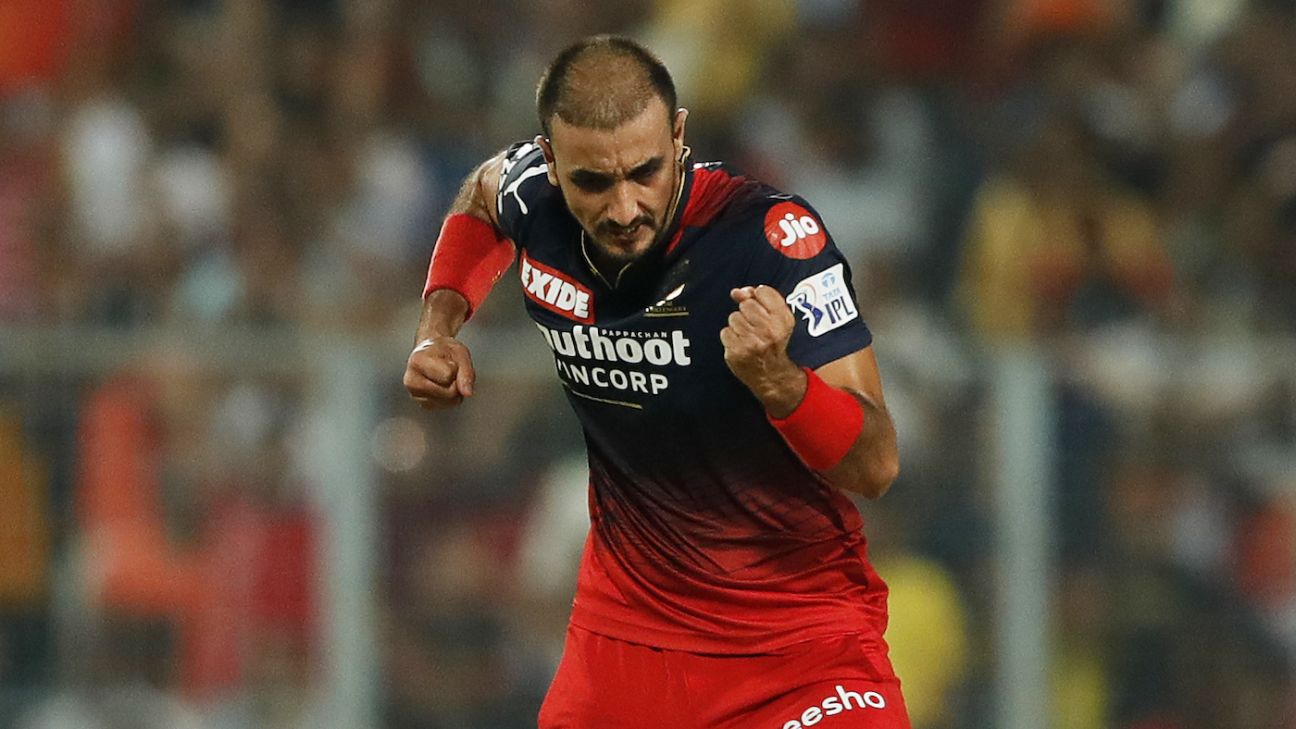 Harshal Patel, according to Royal Challengers Bangalore captain Faf du Plessis, is “the joker in the pack”. Before IPL 2022 started, Harshal told du Plessis, with confidence and conviction, that he prides himself on “bowling the tough overs”. In the Eliminator against Lucknow Super Giants, du Plessis once again gave him just that responsibility, keeping two of his four overs for the back-end of the innings.
Harshal’s third was going to be the most crucial one. Super Giants needed 41 from 18 balls. He started with a wide, and followed it up with another that even beat wicketkeeper Dinesh Karthik. That meant the equation had come down to 35 off 18, very much gettable with KL Rahul and Marcus Stoinis at the crease.
Related
Harshal’s wides were down to him trying to execute wide yorkers from around the wicket. But once they didn’t come off, he switched back to the plans he had employed in his first two overs that went for just eight: mix up his slower deliveries with hard lengths into the pitch and force the batter to hit across the line.
It worked. Stoinis found Rajat Patidar at deep point off a short delivery. More importantly, after conceding six extras, the remainder of the over went for just two more, leaving Super Giants needing 33 off 12.
“He’s a joker in the pack, isn’t he? A special card you pull out,” du Plessis told Star Sports after the game. “More than anything, it’s the time that he bowls. He’s a high-pressure-time bowler. Every single time I feel the pressure is the most, I go to him. He has even asked for it. In one of my first conversations with him, he said, ‘I want to bowl the important overs.’ That confidence speaks for itself. So, today to bowl the important overs and especially that second-last [third-last] one, to change the game almost singlehandedly, [it was] awesome.”
With Josh Hazlewood, a master of the hard lengths, at the other end, Rahul’s first attempt at a cheeky reverse paddle failed to connect. Then he attempted the scoop, only to pick out Shahbaz Ahmed at short fine leg. That was the game sealed for Royal Challengers.
Harshal Patel bowled an excellent 18th over, even picking up the wicket of Marcus Stoinis•BCCI
At the post-match press conference, Harshal didn’t deny not being nervous, but he also spoke with clarity of his plans and how he knew he had to change things around quickly and switch to another plan.
“Definitely I was nervous, there’s no doubt about that, if you’re defending 35 off 18, you’re going to be nervous, there’s no way around it,” he said. “But when I conceded six runs off wides without bowling a legal delivery, I knew the wide yorker won’t work, so I wanted to go back to the plans that had worked for me in my first two overs and give myself the best opportunity to get Stoinis and KL out. Fortunately, I got Stoinis out at the boundary, luckily [Hazlewood] got KL out as well. The game changed there.”
One of Harshal’s biggest strengths in recent times has been the ability to read situations better. This coupled with a better understanding of his own game and control over his craft has given him the edge. Last year, it translated into 32 wickets, the joint-most in a single IPL season. This year, he has been the kind of banker Rashid Khan was for Sunrisers Hyderabad, or Sunil Narine is for Kolkata Knight Riders. This is essentially down to him being able to devise his own methods in the face of a challenge.
Like in his first two overs, Harshal mostly hit hard lengths and bowled cutters into the pitch, trying to have batters dragging across the line towards the bigger boundary. This was not preconceived but a result of closely watching how Super Giants bowled, taking inputs from his own batters, and then assessing conditions quickly.

“Whenever their bowlers bowled short or slow, the ball wasn’t coming on that well onto the bat. That was a clue for me to bowl short and into the pitch as slow as I can, and then mix it up with a good yorker or hard lengths”
Harshal Patel

“There wasn’t much dew, but when it rained and they had the covers on, the moisture that is there underneath comes up to the surface, so the outfield was a tad damp because of that,” Harshal explained. “Whenever their bowlers bowled short or slow, the ball wasn’t coming on that well onto the bat. That was a clue for me to bowl short and into the pitch as slow as I can, and then mix it up with a good yorker or hard lengths. But I knew a majority of my deliveries are going to be slower balls on this sort of a wicket, because if you gave pace, it was becoming easy to hit.”
Harshal’s consistency in execution was even more remarkable because he was coming from a split webbing in his right hand that hadn’t yet fully healed.
“Luckily, I didn’t have to make any changes to my skill, because the skin superficially has healed quite well,” he said. “So I was able to bowl my slower balls, I was able to bowl whatever I wanted to bowl. We tried everything in practice yesterday. I bowled 30-40 balls and was pretty confident this would hold up as long as I didn’t get another impact. So, I didn’t have to make a lot of changes. Luckily, it healed just about enough for me to play this game.”
Harshal gave a peek into his mindset when asked about his conversation with du Plessis that he touched upon earlier – of wanting to bowl tough overs for the team.
“Whether I will be able to deliver or not, I don’t know, but I want to be in those situations, there’s no doubt about that,” he said. “I’ve been wanting to do that for the past two-three years. I’ve been doing it for Haryana. I want to do it at the biggest stage, and I’ll continue to put myself in those situations. Sometimes it’s going to come off, sometimes it won’t. There will be games I will end up losing for the team and I’m okay with that as long as I don’t shy away from these challenges.”
Tags: Faf du Plessis, Harshal Patel, Indian Premier League, RCB vs Super Giants, Royal Challengers Bangalore