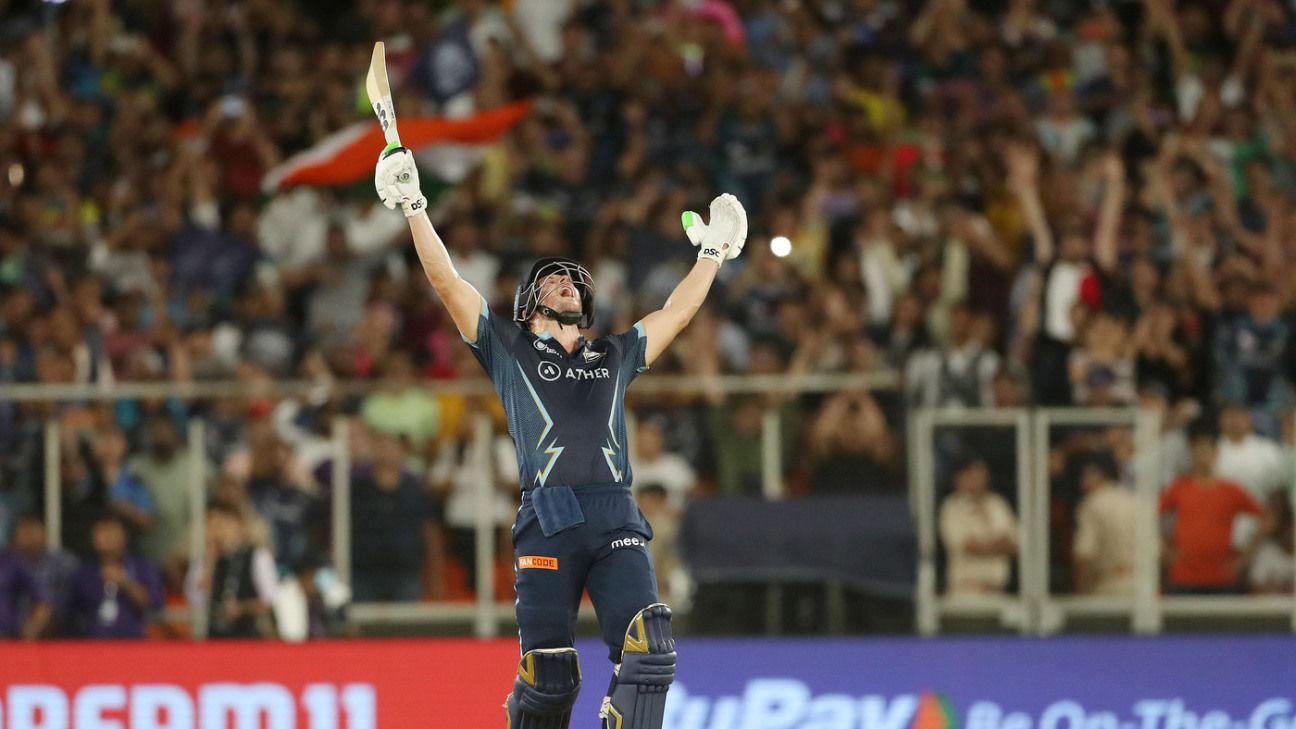 South Africa will tap into the confidence of IPL champion David Miller when they kick off a busy 2022-23 season with five T20Is in India next week.
Miller, who was the sixth-highest run-scorer in IPL 2022, had his best IPL showing in 10 years and was particularly successful against spin, which has often been a weak spot in South Africa’s batting.
“It’s always nice to see guys in form. A guy like David lifting the trophy with the Gujarat Titans – the confidence that he will bring into the team, we look forward to that,” Temba Bavuma, South Africa’s white-ball captain said on the eve of the team’s departure to India. “David has performed exceedingly well at the IPL and I’m sure that will do a world of good for his confidence.”
Related
Milller’s most notable improvement at the IPL was the way he dealt with spin. He went from scoring 226 runs at a strike rate of 98.68 against spin between 2016 and 2021 – which was the second-worst return in that five year period – to scoring 206 runs at a strike rate of 145.07 this year. He was one of only five batters to average over 100 against spin this IPL.
But there are also other reasons for his prolific run. Miller said he felt “extremely backed,” by Titans, indicating that it wasn’t always that way at other IPL franchises. But what about the national side?
“The conversations that I have had with David, he has never expressed those types of feelings to me,” Bavuma said. “As far as I know, David is still an integral member within our team and we trust his performances will continue well into the future.”
While it’s never been expressed whether Miller feels his role in the South African set-up is secure, it’s often been a talking point that he doesn’t get enough time in the middle and that, as is the case with many finishers, a lot rests on him at the end. But, by Bavuma’s own admission in a wide-ranging upcoming interview with ESPNcricinfo, South Africa’s top order has not always done their bit, and as they look to improve their combinations ahead of the T20 World Cup, they may consider using Miller differently.
While Miller has mostly batted between No.5 and No.6 for South Africa, he consistently batted at No.5 for Titans and may want to make a case for a permanent role at that position for the national side too. Bavuma indicated that South Africa would consider it, if it brings the best out of Miller.
“In terms of him batting a bit longer, that has always been the conversation over the years when David has done well,” Bavuma said. “He understands where he fits in within the team. If he feels he can add more value within a different position, a conversation can be had in that regard. There is no way we are going to stifle him or restrict David in any manner. That’s how we try to treat all the players. We try to set them up in positions where they can succeed and make strong plays for the team.”
‘Brevis should be given time and space to hone his game’
The same applies to those who are not in the team at all. Dewald Brevis is the only South African from this season’s IPL who was not selected for the T20I squad, despite setting the Under-19 World Cup alight.
Bavuma explained that South Africa did not want to rush the 19-year-old into international cricket and hoped to see him perform well in the domestic set-up this summer. Brevis has been contracted to the Titans (the Centurion-based South African domestic franchise) for the next two seasons.
“In all fairness to him, he hasn’t played a first-class game,” Bavuma said. “In terms of expectation but also allowing the boy to grow within his game, it would be fair to allow him to play a couple of first-class games where he can really get an understanding of his game. It will be a lot of pressure to throw him into the international set up and expect him to make plays. He will be treated like any other exciting young prospect that comes onto the scene. He will be looked after as well as he can. He should be given time and the space to hone his game within the system and ease into the international side of things.”
Tags: South Africa, South Africa in India, Temba Bavuma