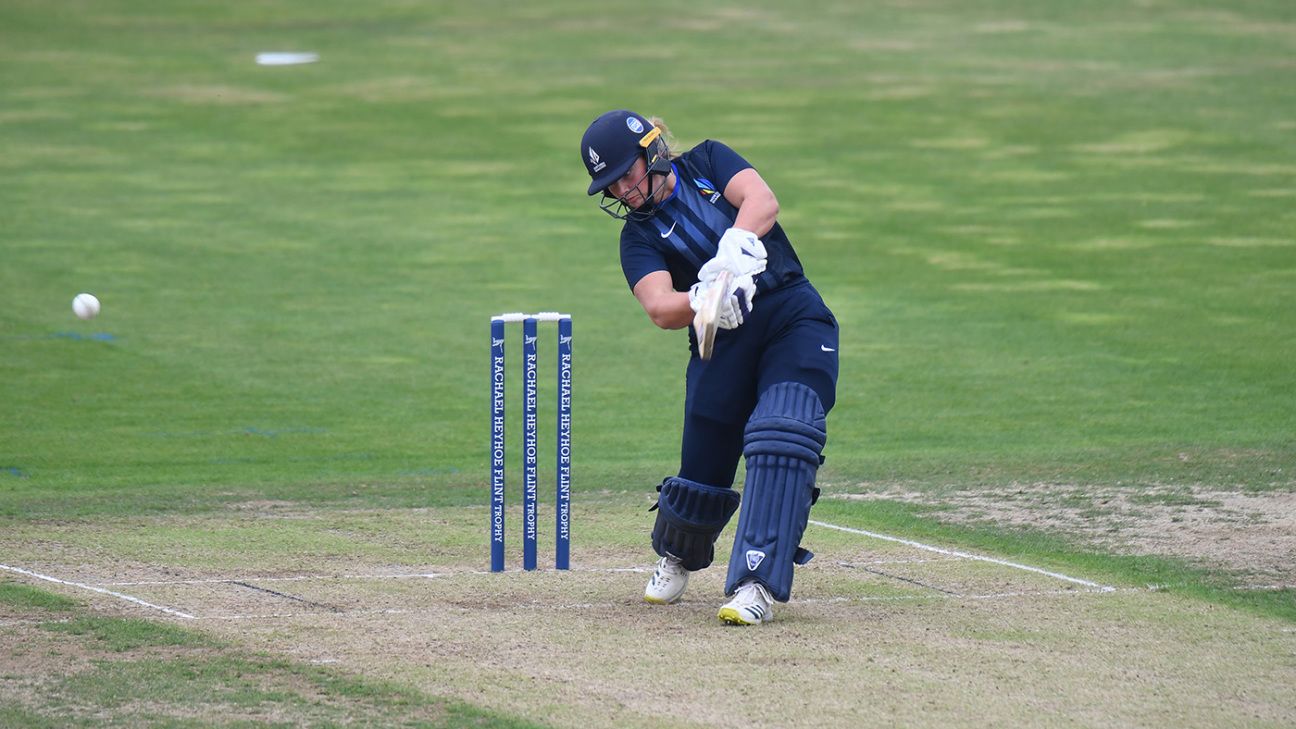 Northern Diamonds 145 for 5 (Heath 60, Kalis 39, Armitage 30) beat Lightning 140 (Claridge 41, Harmer 35, Armitage 4-27, Smith 3-18) by five runs
Northern Diamonds kept their Charlotte Edwards Cup hopes on course by holding their nerve to defeat Lightning by five runs at Seat Unique Riverside.
The home side set an imposing total of 146 after Bess Heath led the way with a great knock of 60, sharing a partnership of 93 with Sterre Kalis. Kalis and skipper Hollie Armitage scored 39 and 30 respectively to lay down a challenge for Lightning.
Ella Claridge and Bethany Harmer gave Lightning real hope of chasing down the target, but the Diamonds’ bowlers held their composure under pressure led by Armitage with figures of 4 for 27. Linsey Smith and Emma Marlow also impressed to seal a narrow victory, taking the race for Finals Day into the final game.
After winning the toss, Heath and Kalis were in great touch at the top of the innings to put the visitors on the back foot in the power play. Heath made the most of a life after Kathryn Bryce failed to run her out for 1, while Kalis was also afforded a second chance when Teresa Graves put her down on 14 at square leg.
Related
Lightning were to rue those missed opportunities as Kalis and Heath poured on the runs for the home side. The two batters cruised past the 50 partnership for the opening stand in only 40 balls, and surpassed the highest stand for the first wicket for the Diamonds in the 2022 campaign.
Heath brought out her reverse-sweep to perfection to bring up her fifty, dispatching Marie Kelly for two boundaries in the 12th over to reach the milestone. The opening stand was only ended when Kalis mistimed her drive off Lucy Higham to Claridge.
Heath and Armitage kept the pressure on the visitors and pressed over the 100-run mark. Piepa Cleary prised out Heath for a fine innings of 60, stumped by Sarah Bryce while overbalancing.
Late wickets from the visitors prevented the Diamonds surpassing 150, but the hosts were well placed after posting 145 for 5 from their 20 overs.
Marlow made an instant breakthrough for the Diamonds to remove Kelly to put Lightning on the back foot in the first over but they responded through Harmer and Claridge, who raced to their 50 partnership from 40 balls, matching the earlier effort from Kalis and Heath.
Armitage brought herself into the attack and secured a vital breakthrough to dismiss Harmer lbw for 35, ending the partnership for the second wicket for 74.
Sophie Munro ensured the game would have a tense finish with a quick-fire 16 from 10 balls but Armitage held her composure when it mattered the most to dismiss Munro, Graves and Cleary.
Sarah Bryce still kept Lightning in the game, leaving them needing 10 runs from the final over. But, the Diamonds held their nerve under pressure as Smith bowled Higham and had Ballinger caught by Phoebe Turner to guide her side over the line.
Tags: Bess Heath, Bethany Harmer, Charlotte Edwards Cup, Diamonds vs Lightning, Ella Claridge, Emma Marlow, Hollie Armitage, Lightning, Linsey Smith, Northern Diamonds, Sterre Kalis