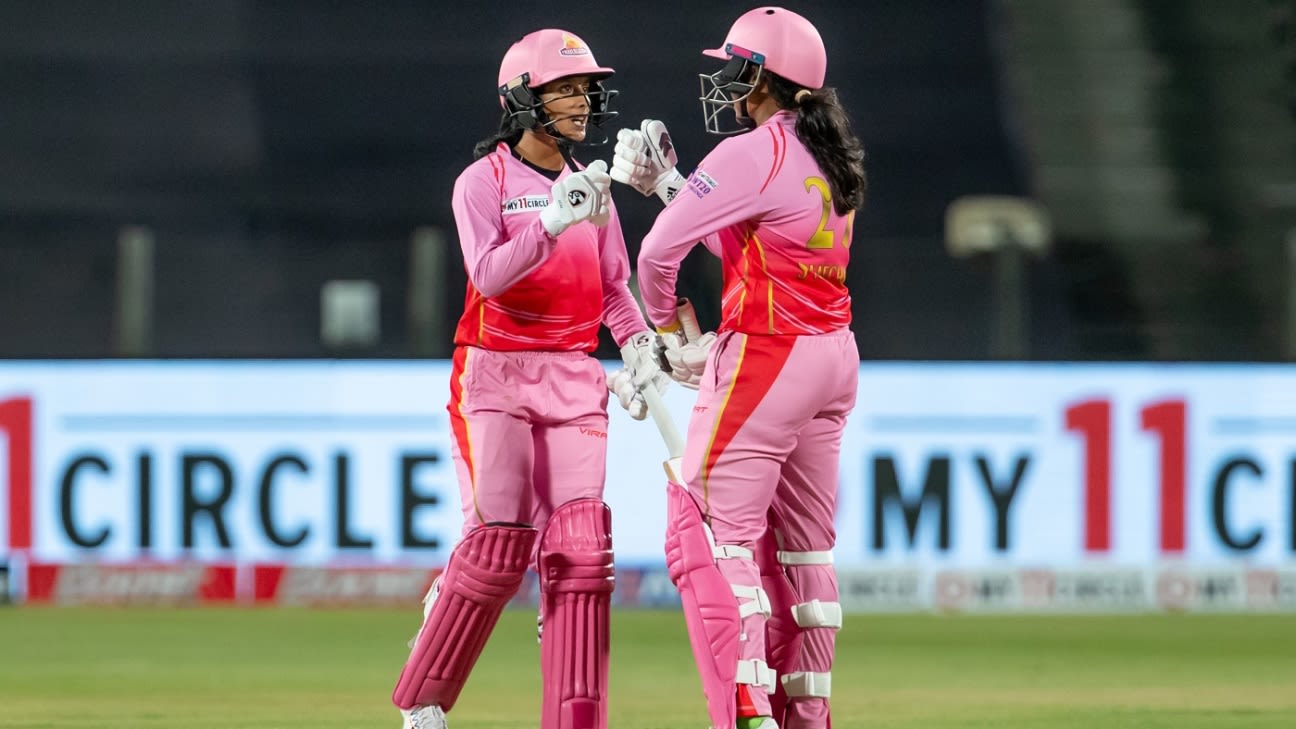 Trailblazers 190 for 5 (Meghana 73, Rodrigues 66, Bahadur 2-31) beat Velocity 174 for 9 (Navgire 69, Shafali 29, Poonam 2-33, Gayakwad 2-44) by 16 runs
For the third straight game, the bar was raised by the batters at the Women’s T20 Challenge. The record for the highest total in the tournament from Trailblazers was very nearly overhauled as Velocity produced a strong performance with the bat, but failed to chase the target down in the end.
However, Velocity technically proved victors even in defeat as their score of 174 was 16 runs more than what they had to score to qualify into the final. Their superior net run rate (+0.74) compared to Trailblazers (-2.45) coming into the contest meant they didn’t ever need to chase 191, all they had to do was not lose by 32 (or more) runs.
Related
At the halfway stage, a chase of 191 seemed daunting and it appeared that the prudent strategy for Velocity would be to approach the game like a 159 chase. However, Yastika Bhatia and Shafali Verma smacked 36 in four overs and Kiran Navgire, batting in her first innings of the competition, hammered 69 in 34 balls to show that they were playing like it was 191 that they needed. Eventually, they lost steam and fell 16 runs short, but not before threatening to break the highest total record for most of the chase.
A chase to remember
The chase began with Shafali being joined with a new partner for Velocity’s second game. Bhatia was promoted to open, and together they made use of the field restrictions to lift the run rate to nine in the first four overs. But Bhatia fell for 19 to Salma Khatun’s offspin around the stumps after being bowled while trying to slog.
Shafali, who had started aggressively with five fours in her first 14 balls, then fell for 29 for Velocity to lose both set openers in quick succession. But while the 18-year-old was around, she entertained with her cuts and inside-out punch shots through the off side.
When Laura Wolvaardt walked in at No. 4, she and No. 3 Navgire were both on 0, and the score read 50 for 2. With two new batters in the middle, Trailblazers’ target of restricting Velocity to inside 158 seemed like a reality again. But the very next ball began a deflating process that would eventually last till the final ball.
Kiran Navgire smashed a 25-ball half-century•BCCI
That’s because Navgire, facing her first ball of the competition, and facing the experienced Khatun, started off with a slog-swept six over deep midwicket right away. She then punched the Bangladesh spinner through cover and followed it up with another six over the leg side to start with 17 in her first five balls.
The onslaught would continue till the 17th over, with a final tally of five fours and five sixes from Navgire’s bat. The Dhoni fan who hit 54 fours and 35 sixes in her debut T20 season for Nagaland in the Senior Women’s T20 Trophy showed why she is considered the new big thing in Indian white-ball cricket by dominating through the middle overs. By the time her two sixes ended the 14th over, Velocity needed only 20 more runs to go past 158, and as the time out was called, the Trailblazers shoulders had dropped.
Navgire eventually fell for a 34-ball 69 in the 17th over, but not before she set the record for the fastest fifty (25 balls) in the competition’s history. With two tidy overs from Sophia Dunkley and Renuka Singh pushing the required run rate for the match target of 191 to over 10, Navgire looked to find the boundary for the 11th time, but was out stumped by Dunkley.
As she walked back to a standing applause from the dugout and her home state crowd in Pune, Velocity needed only five to reach 159 and with 20 balls to spare, the result that decided the finalists was in the touching distance even though the match target of 191 appeared to get out of reach.
Velocity eventually secured finals qualification in the 19th over with debutant Simran Bahadur hitting the ‘qualifying’ runs – a paddle four to fine leg – off Hayley Matthews. That ensured the defending champions would be knocked out, even if they did sign off with a 16-run win.
Trailblazers push the limits
Knowing that they had to post a total that was big enough to keep that 32-run buffer for the bowlers, Smriti Mandhana’s Trailblazers started off aggressively even though the captain herself fell for 1.
Sabbhineni Meghana – making her debut for the season – muscled 73 runs in 47 balls, and Jemimah Rodrigues clubbed 66 in 44 balls to lead the way in setting the competition’s highest score. The duo got together in the third over, and eventually put on 113 runs together in 73 balls for a second-wicket stand that kept the run-rate hovering around 8.50 through the innings.
Meghana, in particular, enjoyed scoring over the bowler’s head to full balls in the opening salvo with the new ball and grew into playing the square shots as the innings progressed. Rodrigues was more innovative, walking across the crease to find the boundaries behind square on either side.
Meghana reached her fifty in 32 deliveries but did enjoy some luck in her innings. She was dropped by Sneh Rana and Ayabonga Khaka through her stay, and was eventually out in the 15th over to Kate Cross.
Rodrigues, who reached her fifty in 36 balls, then accelerated in Matthews’ company to eventually finish with a strike rate of 150. Matthews and Dunkley then added a brisk 32 in the death overs to set an impressive target. It wasn’t enough though, as Trailblazers paid the price for a big defeat in the opening game.
Tags: Trailblazers, Trailblazers vs Velocity, Velocity, Women's T20 Challenge