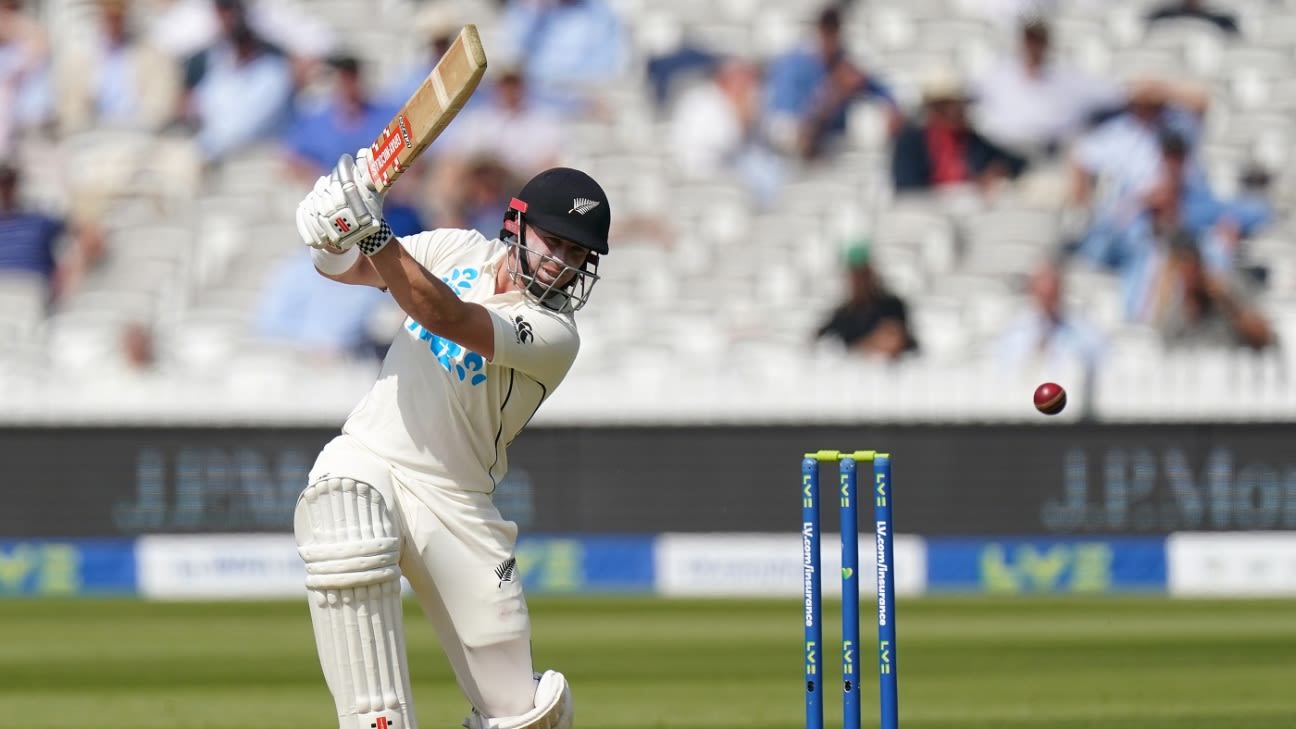 New Zealand have named Henry Nicholls and Trent Boult in their 15-man squad for the first Test against England at Lord’s, although both have been described as “unlikely” starters.
Nicholls has been recovering from a calf injury sustained in training before leaving New Zealand, and has not had any game time in the build-up to the three-Test series. Boult, meanwhile, will only arrive in the UK later on Monday after flying directly from playing for Rajasthan Royals in Sunday’s IPL final.
Michael Bracewell has been included as cover to the squad for Nicholls, who has also spent time in isolation after testing positive for Covid-19 in the first week of the tour. Bracewell has yet to be capped in Tests, with Daryl Mitchell likely to bat at No. 5 if Nicholls is unfit.
Related
New Zealand have been prepared for Boult not being available, due to Rajasthan’s success during the knockout stages of the IPL, and have various options for how to constitute their attack. Tim Southee, Neil Wagner and Kyle Jamieson are likely to feature, with Colin de Grandhomme adding depth as a seam-bowling allrounder. That would leave the final bowling spot to be filled by either Matt Henry or Ajaz Patel.
Boult missed the first Test of New Zealand’s two-Test series in England last year ahead of the World Test Championship final, and head coach Gary Stead said managing their resources was a situation he was used to.
“Trent arrives in later today and we’ll see how he scrubs up but we’ve had conversations leading up into this,” Stead said. “It’s part of the world and the way it is right now and I guess with the complexity of putting schedules together and then you have the IPL on top of that, it just adds another layer to it all.
“We’ve been through this before with different players. I guess it’s not something that’s new to us and we’ll deal with that tomorrow and work out what’s best for us going forward with Trent Boult in particular.”
Nicholls has returned to training in the nets, but the Lord’s Test could come too soon for the experienced middle-order batter.
“At the moment, we think it’s unlikely that Henry will play,” Stead said. “Obviously with the Covid, that just put him back a week or so from where we were wanting but he is progressing really well. I think he’s an unlikely starter so we will hold Michael Bracewell here as extra cover within the squad.”
New Zealand have frequently played without a spinner in recent times – Patel has not featured since taking all ten wickets in an innings in Mumbai last year – but Stead said that the prospect of drier, less seam-friendly surfaces could lead to a change of tack.
The squad’s disrupted build-up may also influence their thinking. Two days of the tour match in Hove were washed out by rain, while Southee and Wagner have only bowled 15 and 19 overs respectively, having arrived in the UK last week. Patel, meawhile, was New Zealand’s most successful bowler in their defeat to a County Select XI at Chelmsford last week, taking 5 for 87.
“We’ve certainly gone that way before,” Stead said, on the possibility of playing an all-seam attack. “Playing in England is a little bit different to New Zealand. The pitches are certainly cut shorter than what we’re used to and from our experience from a couple of warm-up matches, it appears that it’s been a pretty dry start to the summer and pitches are certainly on the drier side. We’ll have a look in the next couple of days before we finalise that XI.”
Jacob Duffy, Blair Tickner, Rachin Ravindra and Hamish Rutherford have been released from New Zealand’s initial 20-player squad. Rutherford has already linked up with Leicestershire to play in the T20 Blast, while the other three will all head home this week.
New Zealand squad: Kane Williamson (capt), Tom Blundell (wk), Trent Boult, Devon Conway, Colin de Grandhomme, Cam Fletcher (wk), Matt Henry, Kyle Jamieson, Tom Latham, Daryl Mitchell, Henry Nicholls, Ajaz Patel, Tim Southee, Neil Wagner, Will Young, *Michael Bracewell
Tags: Henry Nicholls, Michael Bracewell, New Zealand, New Zealand in England, Trent Boult