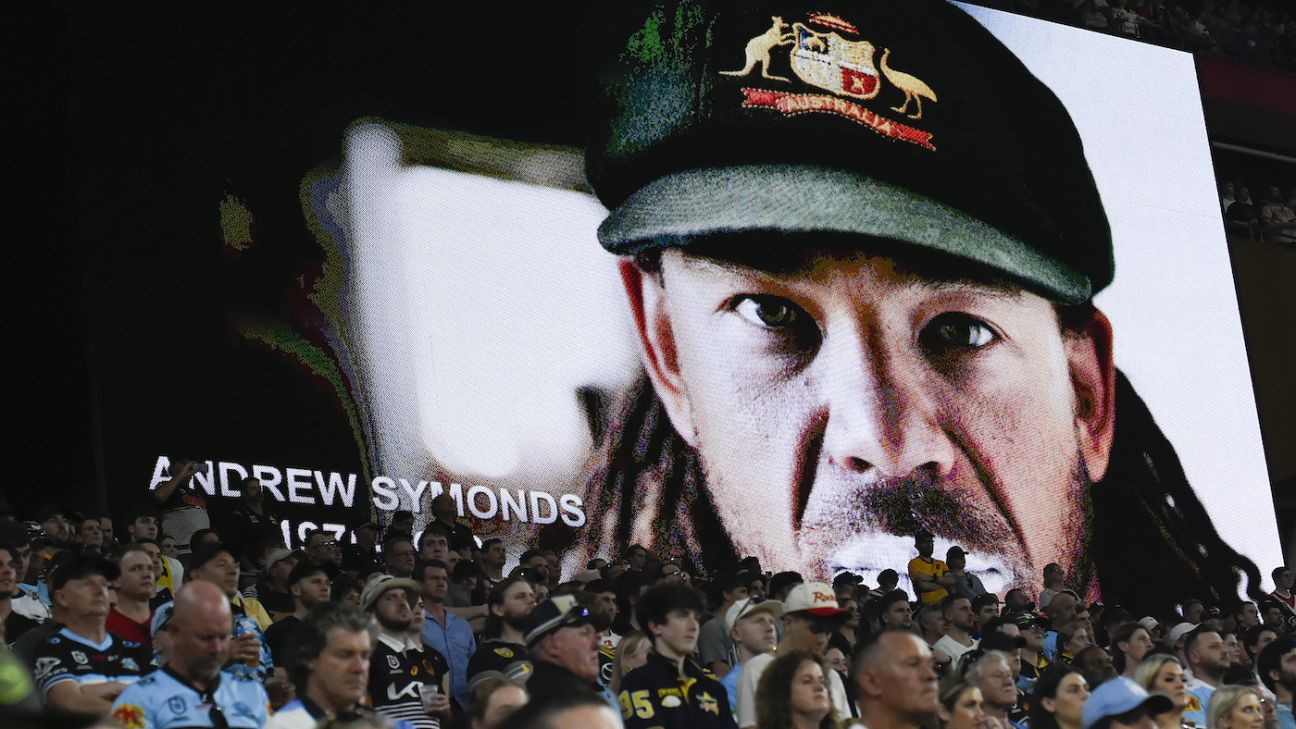 Andrew Symonds, the former Australian allrounder who played in 26 Tests and 198 ODIs in an international career spanning from 1998 through 2009, has died in a car accident in Queensland.
Symonds was 46 and was involved in an accident outside Townsville where he lived in retirement.
Related
In a statement, Queensland police said: “Police are investigating a single-vehicle crash in Hervey Range, around 50 kilometres from Townsville that’s taken the life of a 46-year-old man last night.
“Early information indicates, shortly after 11pm the car was being driven on Hervey Range Road, near Alice River Bridge when it left the roadway and rolled.
“Emergency services attempted to revive the 46-year-old driver and sole occupant, however, he died of his injuries.”
Symonds was a two-time World Cup winner during both of Australia’s undefeated title runs in 2003 and 2007 as well as a key member of the Test side in the mid-2000s. His death is the third one of an Australian cricketer in 2022, following the passing of Shane Warne and Rodney Marsh in the first week of March.

Think of your most loyal, fun, loving friend who would do anything for you. That’s Roy

“Australian cricket has lost another of its very best,” Cricket Australia chairman Lachlan Henderson said. “Andrew was a generational talent who was instrumental in Australia’s success at World Cups and as part of Queensland’s rich cricket history.
“He was a cult figure to many who was treasured by his fans and friends. On behalf of Australian cricket our deepest sympathies are with Andrew’s family, team-mates, and friends.”
Queensland Cricket chair Chris Simpson, who played alongside Symonds at domestic level, said: “On behalf of Queensland Cricket, we express our deepest sympathies to his family and will do whatever we can to assist them
“It is a shattering loss to those nearest to him, and his wide circle of friends which extend to all corners of the cricketing world.”
“His untimely passing will also resonate deeply with the many fans who thrilled to his efforts with bat, ball and in the field. He stood out for his skill, courage and determination, and the fans who saw him at his best will never forget his impact on a game.”
“We are all hurting and will miss him greatly. His former teammates will remember his loyalty to the playing group and recall the fun times with great fondness, and sorrow that he is gone.”
Symonds was the ultimate allrounder – a fearsome striker of a cricket ball, a bowler capable of brisk medium pace and offspin plus one of the greatest fielders in the game.
Born in Birmingham, he could have played for England but turned down a call-up to the England A team in 1995. His first Australia selection, to the ODI side, came in 1998 but for a long time it appeared he would not make the most of his huge talent.

That changed in spectacular fashion in Australia’s opening match of the 2003 World Cup when he walked in with Australia 86 for 4 against Pakistan and crunched 143 off 125 balls. He would go on to make five more ODI hundreds.
His Test debut came in 2004 and while there were a couple of half-centuries in the early matches, it was the Boxing Day Test against England in 2006-07 that provided the breakthrough when he made a blistering 156.
He scored a career-best 162 against India at Sydney in 2008 in a match that would also become one of his most controversial moments of his career when he was involved in the lengthy race row with Harbhajan Singh.
Off-field issues were never too far away for Symonds. In 2005 he was suspended, turning up drunk ahead of what became Australia’s historic loss to Bangladesh at Cardiff and his international career was brought to a close by further run-ins including going fishing in Darwin when he should have been at a team meeting in 2008. A breaking of team drinking rules led to his exit from the squad in England on the eve of the 2009 T20 World Cup and his Cricket Australia contract was soon cancelled.
With his career having met the start of the T20 era – he struck a 34-ball hundred for Kent in 2004 and earned USD1.35 million at the first IPL auction in 2008 – he became a traveling T20 player with spells at Queensland, Deccan Chargers and Surrey before retiring in 2012. He later moved into the media and was a regular in the commentary box in Australia.
At Kent, where Symonds played 49 first-class matches, 62 List A games and ten T20s between 1999 and 2004, he was voted the Spitfires’ greatest overseas player in 2020.
Simon Philip, the Kent Cricket chair, said in a statement, “Andrew Symonds remains one of the most popular Kent players of the modern era. He contributed greatly to the Club across all three formats and his rare talent left many extraordinary memories with those who saw him play.”
David Fulton, who skippered Symonds during his time at Kent, said, “He was a brilliant, combative cricketer who could win a game with bat, ball, in the field or with his sheer will to win and presence on the field. Simply, a fantastic teammate.”
Tags: Andrew Symonds, Australia